Hari Mehrotra, who played a small part in Asif's last film Love And God (1986), speaks about the filmmaker and his obsession with perfection.

Filmmaker K Asif is known for helming the classic Mughal-e-Azam (1960). After the release and success of this film, Asif started work on a film of equally monumental proportions titled Love And God (1986). It was based on the tale of Laila and Majnu. Unfortunately, Asif could not see this project through.

The director had first cast legendary actor-filmmaker Guru Dutt as Majnu when Love And God went on the floors in 1963. But after Guru Dutt’s sudden death in 1964, the film was shelved.

Asif then cast the upcoming actor Sanjeev Kumar in the lead role and resumed shooting in 1970. However, the film had to be shelved again as Asif died in 1971.

The incomplete film was finally patched up and released by producer KC Bokadia in 1986. It starred Sanjeev Kumar, Nimmi, Pran, Lalita Pawar and Amjad Khan.

On Asif's 95th birth anniversary, we got talking to someone who played a small part in Love And God. Hari Mehrotra, now a film producer, shot for a part in the film when he was all of 20. He vividly recalls the film and interesting incidents revolving around Asif.

“I was just 20 years old then," said Mehrotra. "I had a lot of passion for working in films. So I came to Bombay and got introduced to Sultan Ahmed saheb. He was the chief assistant director [to Asif]. We became good friends. So I was given a small role in Love And God.”

Recalling his role, Mehrotra said, "They had created an Arabic market where there were different types of shops. I was placed in one of the shops. I was one of the guys who stones the character of Majnu (Sanjeev Kumar).”

His co-artistes included Amjad Khan, who would go on to become one of the best known villains in Hindi cinema. "At that time, Amjad Khan and Roopesh Kumar were in their teens," Mehrotra said. 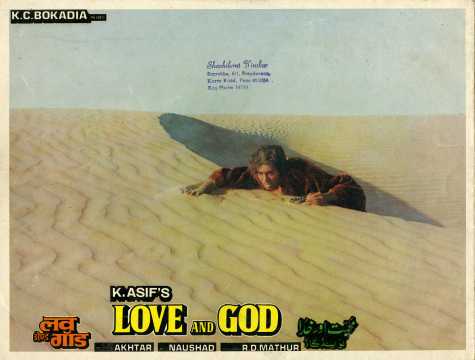 Mehrotra believes that Asif knew exactly what he wanted and didn’t hesitate to take harsh decisions for the sake of his art. "He had very good understanding about a scene," he said. "Once we were on location throughout the night while the sets were being built. Asif saheb came at four in the morning. He looked around and cancelled the scene as he wasn’t convinced, although around Rs10 lakh had been spent on it! He didn’t start shooting until he was happy with every bit of detail!”

Mehrotra believes Asif alone deserves the title of Mr Perfectionist. “Today we consider Aamir Khan a perfectionist. But he [K Asif] was an even bigger perfectionist. That’s the reason why the product [Mughal-e-Azam] came out so well.” That was also perhaps the reason Asif made only three films in his entire career, including the incomplete Love And God. He produced a fourth, Hulchul (1951), but it was helmed by another director.

Mehrotra also remembers an interesting habit of the Mughal-e-Azam filmmaker. “He had this peculiar habit of snapping his fingers to drop the ash from his cigarette,” he recalled.

Mehrotra was obviously disappointed that Love And God was never completed. "This film was also planned on a grand scale, like Mughal-e-Azam," he says. "Unfortunately, he passed away. Two other actors, Guru Dutt and Sanjeev Kumar, also passed away. So, the film could not get completed. Bokadia saheb did release it later. But it didn’t have that thing which I had seen earlier.” Which was a pity, because Asif had promised that Love And God would put even Mughal-e-Azam in the shade. Now we can only imagine what the filmmaker's vision might have been.

Mehrotra has produced Viraam, which stars Narendra Jha and Urmila Mahanta. The film was recently premiered at Cannes. Speaking about the film, he said, “It is about the victory of good over evil. It is about how an evil thought can be turned into something good. Viraam means the end of worldly desires. There comes a time when a person decides to cut off all such ties.”