My Marathi project Shivaji is the reason why I'm robbing a bank: Riteish Deshmukh


In a fun interview with Cinestaan, the Bank Chor actor confesses to having stolen a schoolmate’s sketch pens, claims he feared for Vijender Singh during his knockout rap with the boxer and reveals why he is robbing the bank.

For aeons we felt our banks were safe houses, but we ought to do a rethink now, for a Bank Chor (Bank Robber) is on the loose. That thief is none other than Riteish Deshmukh. The popular comic actor finds himself looting a bank in his next, titled Bank Chor. We don’t know yet whether Champak Chiplunkar (name of Deshmukh's character in the film) succeeds in his attempts, but we can say with certainty that Deshmukh is a bankable actor when it comes to comic roles.

With Bank Chor, the actor has his first Yash Raj Films project and he looks to have encashed this opportunity fully. The film’s trailer and innovative promotions have set the right buzz going for the comedy flick.

Cinestaan.com met the actor at Yash Raj Studios. Before the meeting, this writer hid his wallet, watch and other valuables and stored them in a ‘safe’ corner. Deshmukh was dressed casually and wore a cap. He looked jaded, sleep-deprived, (robbing a bank is apparently exhausting work) but appeared to be in great spirits. In keeping with the spirit of the film, we did our own bakwaas with the Bank Chor. He praised his director Bumpy, said he has learnt a few things from professional boxer Vijender Singh, and confessed to stealing sketch pens from a schoolmate.

Here are the excerpts from the interview.

Is it true that every time you step out in public, you have people saying, 'woh dekho saala Bank Chor aa gaya’ (Look... here comes the bank robber)?

How do I cause a divide?

Oh, on a lighter note.

On a lighter note, the rest of the notes are already demonetised. It’s the writer’s choice. I thought it was quite cool, be it Ganpathy Bappa Morya or Shirdi Sai Baba. I wouldn’t think it is a divide, but just a cooler way to pay tribute to God.

Does your robbery have the blessings of the Lord?

I hope so. As a robber, Champak believes in vastu-jyotish vidya [astrology based on the science of architechture]. I choose an auspicious day to rob the bank. The first thing he does is a Ganesh aarti [prayer]. He is a religious chor. He thinks that by changing the disha [direction] to the northeast, more money can be drawn from the vault. There is a line in the film, disha badlo taaki dasha badal sakey [change the direction to change your condition]. He is not robbing for luxury, though. He has his issues, bills and loans to pay.

You’ve been spoofing big celebrities with your 'Bakwaas with Bank Chor' videos on Twitter. Were you not worried that you would offend someone?

I sincerely hope we haven’t offended anyone. Knowing friends and co-actors, I don’t think they will take offence to it. We have probably selected people who have a sense of humour. We had someone like Shah Rukh Khan who has tweeted back to the Ra.One poster. The others — Priyanka Chopra, Ranveer Singh, Abhishek Bachchan — have all replied. All of them have a sense of humour.

It was Ashish Patil [business and creative head and VP: youth films, brand partnerships, talent management, Yash Raj Films] who conceived of this idea. He felt that for such a film, you needed clutter-breaker promotions. Bank Chor is a small film. We needed something to stay afloat, in terms of the bigger films that are coming. We have Tubelight, besides the Baahubali 2 hangover is on for long. How could we stand out? This is a great approach of having a parallel promotion thinking what would Bank Chor do on a promotional trail? He would steal other posters, interviews, songs.

Your career has been like one bumpy ride. Now you are in a film that is directed by a man called Bumpy. Can you talk about him?

His name is Bumpy but the ride was smooth. I got a call from Aditya Chopra and he asked me whether I’d like to hear the script. I’d never worked with Yash Raj Films before. I’d committed to another film but that, unfortunately, it didn’t come out. When Bumpy entered to narrate the film, he had these dreadlocks. I looked at him and said to myself, ‘Mar gaye [I’m screwed]. But once he narrated the film, I really liked it. It was funny, it had comic thrill. It is a genre that we rarely do. Chiplunkar has never seen such huge amounts of money. He doesn’t even know how to open a bank locker. He presses the red button and that sets off the burglar alarm, the cops are coming. Eventually, he figures out how to open the locker. It’s the first time he has seen so much money.

Bumpy is a great chef. He tells me that imagine a hot frying pan, butter is melting, you sprinkle some pepper, slide this salmon and then just let it swirl a little bit, put some spaghetti, add these meatballs and then that first taste – that’s the look I want on your face. Every time there would be another recipe. I would say that’s enough. Well, that’s Bumpy for you.

A Sairat (2016) is now being remade in Hindi. You had produced a successful film, Lai Bhaari (2014). Was there a temptation to remake that in Hindi?

I’m not sure whether Lai Bhaari would have worked in Hindi at that point of time. Lai  Bhaari’s concept was new to Marathi cinema. That concept was like a Dabangg (2010) or a Rowdy Rathore (2012), which itself was fading out in Hindi cinema. It was new for Marathi cinema to have a hero mouth larger-than-life dialogues.

You had announced that you would be making a Marathi film on the warrior king Shivaji. The film was said to be made on a big budget (Rs250 crore), and even Salman Khan had said he would play a small part in it. What’s the status of the film?

That’s the reason why I’m robbing the bank! Jokes apart, we have just locked in the screenplay. We will soon move to the other aspects — VFX, costumes. There is a lot of work that needs to take place. Besides, it’s extremely premature to figure out what the budget will be. I’m not approaching Chhatrapati Shivaji keeping Baahubali in mind. As a film, Baahubali can have freedom to do many things because it is fictitious. That [Shivaji] work needs to be studied, researched, and ought to be done with a lot of respect, sensitivity. We are working on getting Salman too.

You had also announced producing the Marathi film Mauli. We haven’t heard anything since. What happened?

With Mauli we couldn’t crack the script. We had worked on three different ideas but eventually we realised that we were lacking somewhere.

Are there any plans to produce a Hindi film?

I don’t know. If I have a great script and I find the right actor who can do justice to it, why not? The script has to be good though.

You made a cake for your son Raahyl’s first birthday and posted a video about that. How was that experience?

My wife Genelia said she wants to make our son’s first birthday very special. I asked what we can do. She said why don’t you make a cake... that’s something new. I said I will give it a shot.

How was the blueberry cheesecake though?

It was great. First time lucky. I’ll bake it again, but I don’t think I can match the first effort. That’s the beauty of relationships. You reinvent and seek happiness within. Relationship is like a treasure, the more you dig, the more you find something new. There will be a gem somewhere.

Have you ever stolen anything in real life? I remember how I used to flick vegetables.

So you were a bhaji chor?

Yeah, I did that. I couldn’t rob a bank though.

I was a sketch-pen chor. I’d stolen once when I was in the sixth standard.

Was it from school or from a shop?

School. I wasn’t mad to rob from a shop. There was one guy whose father had come from London. He had got him these amazing Staedtler sketch pens. Before the last lecture was over, I unpacked his bag and then packed my bag. My father asked me what is this. I told him there is this guy from London who gifted us sketch pens. The other smart thing I did was that I never took the sketch pens back to school. The boy did ask me how it happened, and I said I have no idea mate.

You really got into the groove while filming for the Mumbai vs Delhi rap knockout song. You were really in Vijender Singh’s face. It takes guts to do that to a boxer. Weren’t you scared? 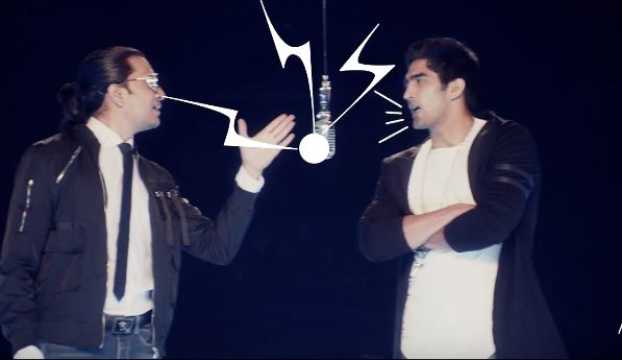 I was scared… for Vijender. He was preparing for his next bout and I hoped he didn't accidentally hit me. He is a wonderful guy. After I finished the performance, I saw the tape and realised that he was far better than me. I was trying too hard while he was just natural. That is why he is Vijender. I got to learn from him.

Finally, in the film you manage to break into Bappi Lahiri’s locker. So, can you tell us how many kilos of gold has he stored there?

When I opened Bappi Lahiri’s locker, I found a letter. It was from the RBI [Reserve Bank of India]. They had written to Lahiri asking whether they could borrow some gold from him.