From promoting cleanliness to speaking out for women, or sometimes just staring at a reel of film, Mumbai's ignored walls are getting a facelift with some stunning murals inspired from one of its oldest resident industries — cinema. Cinestaan.com tries to understand the growing movement that seeks to bring the lost world of poster art and kitsch back to Mumbai.

On an occasional drive from the arterial Western Express Highway to Bandra Reclamation or Swami Vivekanand Road in Bandra (West) in Mumbai, it is easy to spot the silhouette of a bespectacled man looking at a film negative, plastered on the wall of a yellow building. The image is that of Dadasaheb Phalke, the father of Indian cinema. The mural, an iconic image, is an example of the growing combination of street art and Hindi cinema in Mumbai. 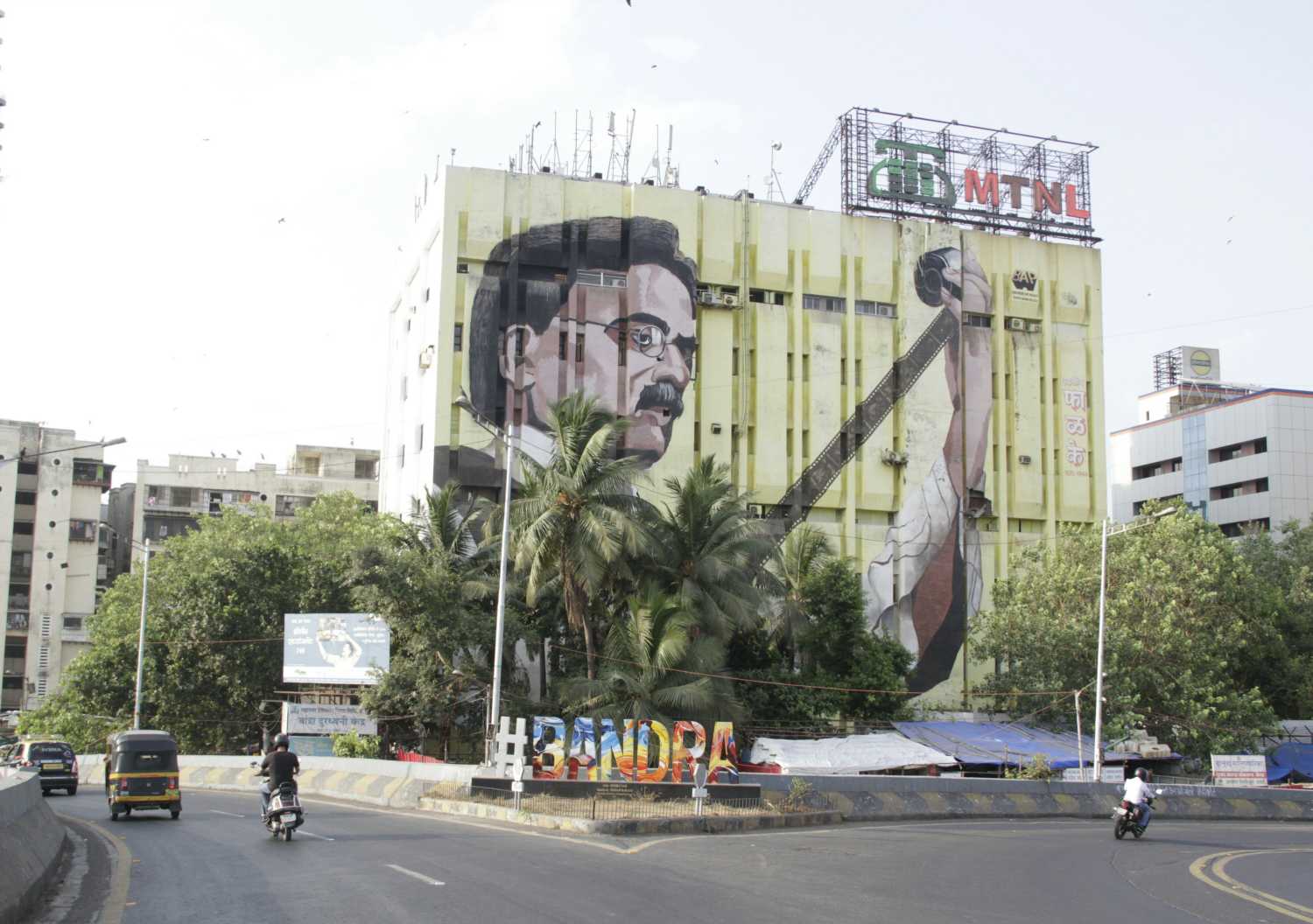 In an interview to GQ magazine in 2014, ST.Art founder Hanif Kureshi said, "In Bombay, Bollywood sucks most of the city’s energy. It’s amazing how people will always choose to go watch a movie on a Friday evening, no matter how shitty it is, than to even look up an exhibition opening, because that’s just too much effort."

In a city that consumes, creates, and lives through cinematic dreams, this is no surprise. There is something inclusive about cinema that allows the man on the street and the star in the palatial bungalow in Bandra find common ground.

Ranjit Dahiya, creator of the Phalke mural, understands this deep connection with Indian cinema. Born in Sonepat, Haryana, Dahiya grew up with the influence of cinema and art around him. "It just happened," he says. "It was not my choice, I guess it was my life. I am committed to art from childhood. I would often take part in school competitions, and slowly it became part of my life."

Having started his career working on posters in Delhi, Dahiya naturally found a balance between his love for cinema and for art. "I started my career as a whitewasher," he says. "I used to whitewash on the street. Later, I became a painter, working on facades. I even worked with people who made posters in Delhi. I made the posters of Yeh Dillagi (1994). The printing technology did not exist at that time. When it came, the entire art of making posters was wiped out. Technology changed everything." 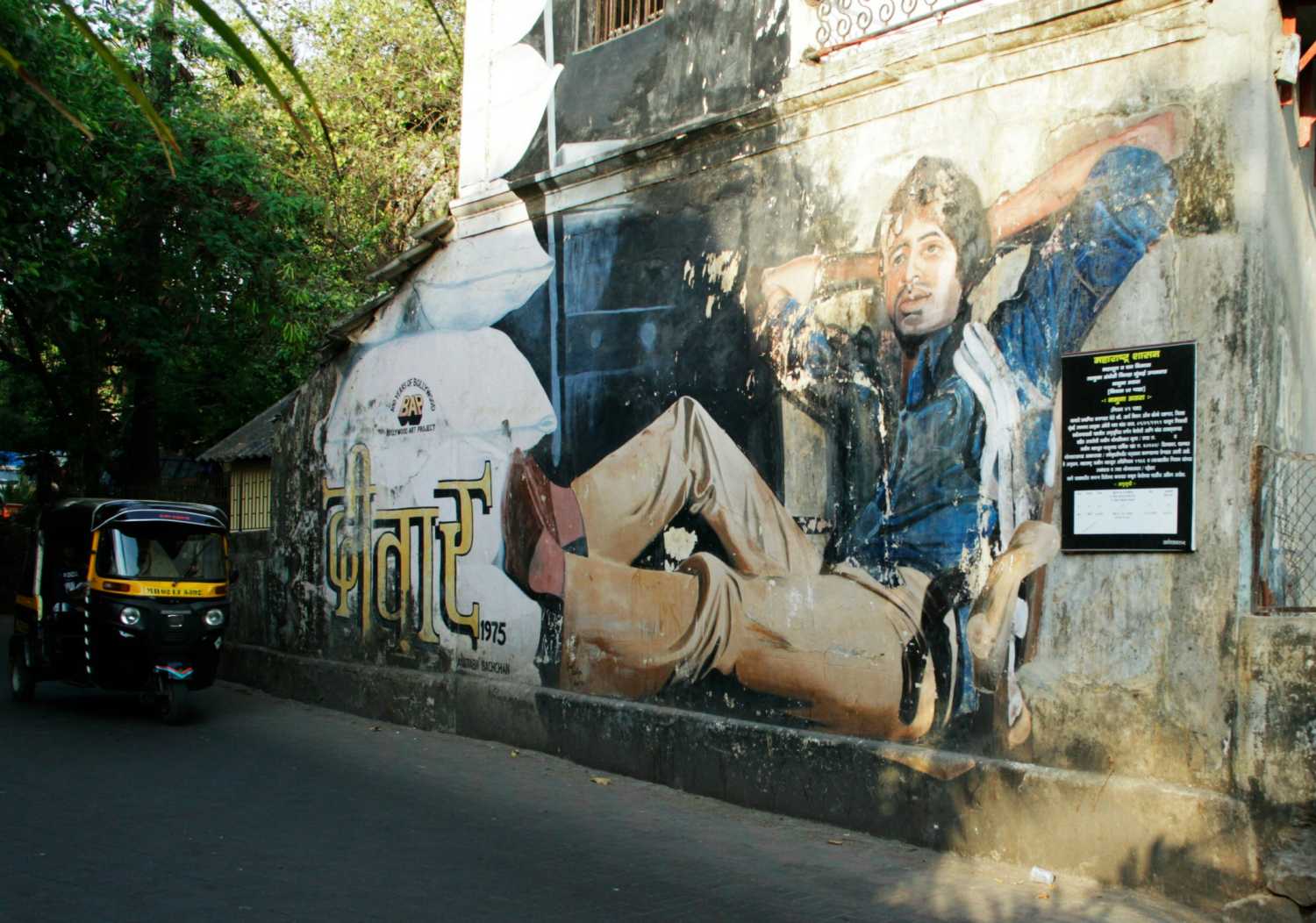 The end of the poster culture is one of the reasons for the rise of street art. Before the 1990s, posters were the primary form of unique kitsch pop culture for the common man. From signboards on barbershops to the large cutouts outside single-screen theatres, these posters were the equivalent of Andy Warhol in the Indian environment. In fact, India's foremost artist, the late MF Husain, started as a poster artist.

K Bikram Singh, author of Maqbool Fida Husain, a biography of the artist, said in an interview to the Hindustan Times newspaper, "He [Husain] probably made the billboard for KL Saigal's Devdas (1935). After that he associated himself with New Talkies and then took off independently."

Over the past two decades, poster art has vanished, leaving a void in the cinematic art in the city. Dahiya agrees, "The painters are unemployed. It's a 70-year-old art, and it was wiped out within 3-4 years. Now people are realizing that it was one of the unique things about the city, and that we have lost it."

While there are foundations like Osianama and the Film Heritage Foundation that struggle to keep alive and restore lost posters, the art itself has found a new medium. Like all art, it has evolved. Art movements like those of the Bollywood Art Project are a throwback to the traditional form of cinema posters with a twist. Dahiya himself has etched several murals across the city depicting some iconic scenes that represent a different era and ethos of cinema. 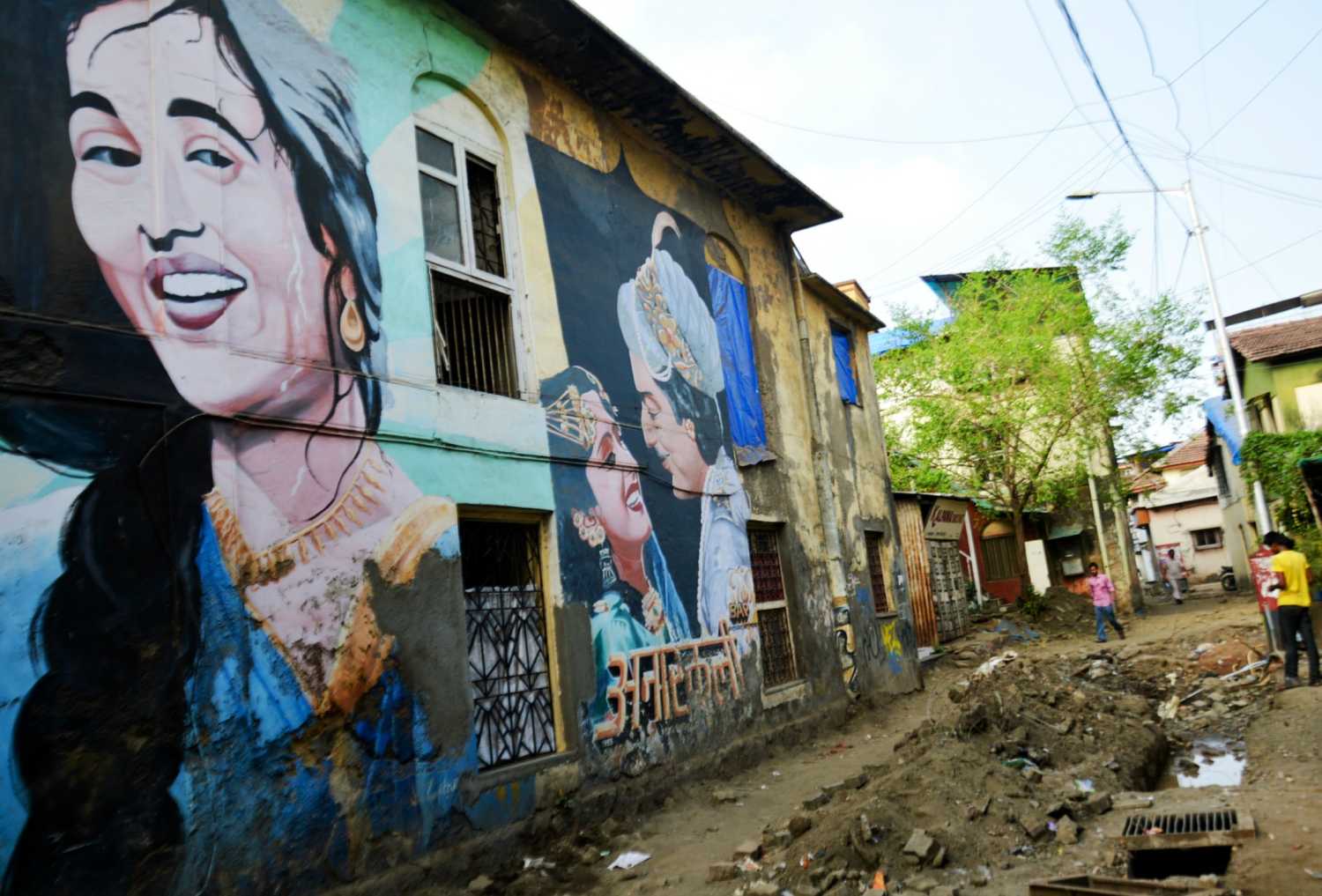 ST.Art is another foundation that creates and leaves street murals featuring cinematic moments across landmarks in Mumbai. Several youngsters are also taking up the platform of cinema and using it to get their message across. Jheel Goradia, who started a sensation with murals hashtagged 'Breaking The Silence', used Bollywood to get the message against abuse against women across. 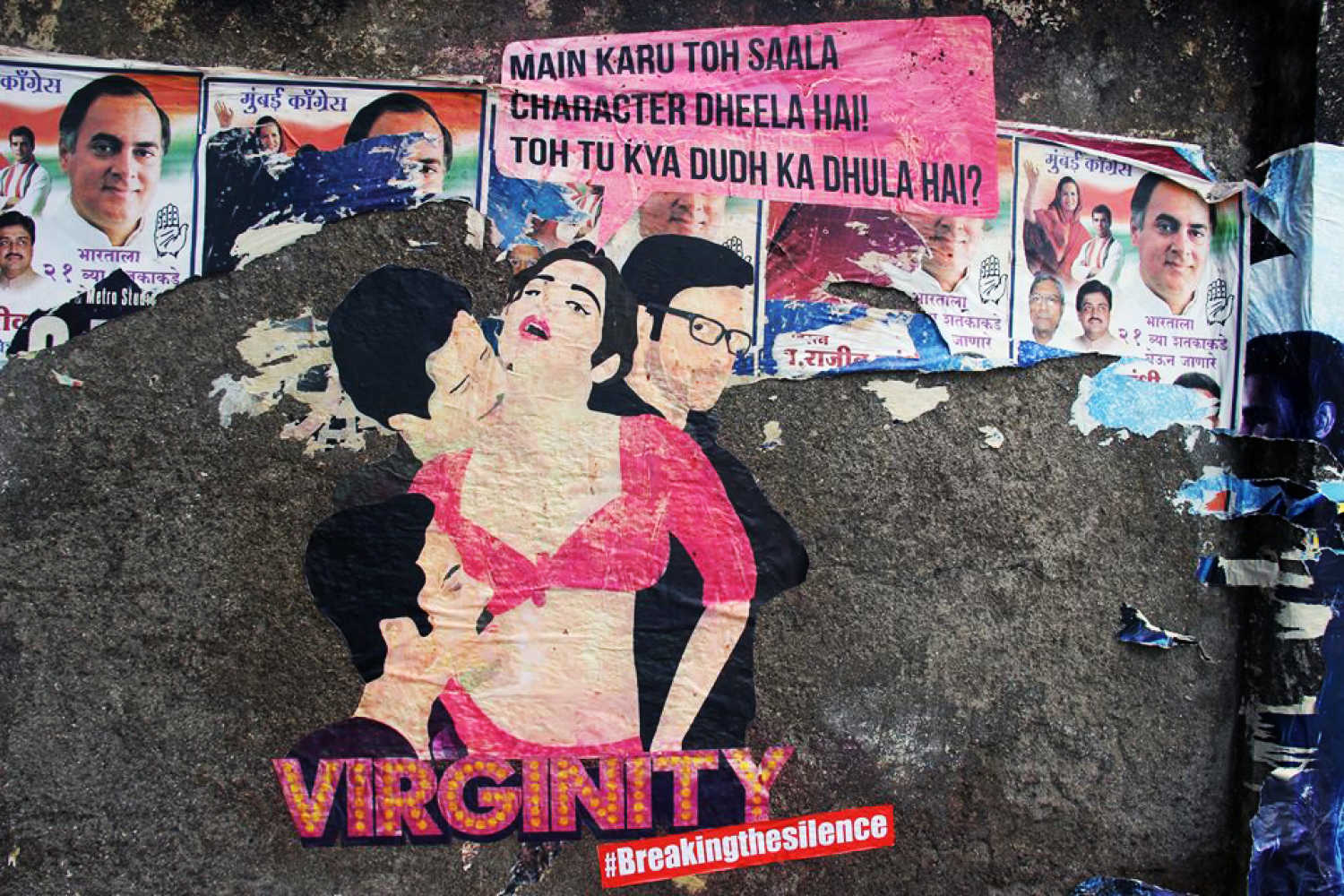 "Hindi cinema in India is a bridge between the educated and uneducated classes," says Goradia. "If I had to put across my message to people, cinema would be the best way because people relate to it. People are attracted to posters on the road, or anything with Amitabh Bachchan or Rani Mukerji in it. It was one way to get the attention of the audience."

It certainly gets the attention of people on the street. Dahiya has an interesting observation about the impact of his artwork on the citizens of Mumbai. "Bollywood is like everybody's favourite thing to talk about In India," he says. "I am not painting any abstract art. From the layman's point of view, it is recognizable. 'Oh Rajesh Khanna!' they say. Then, they start telling me their own stories about Rajesh Khanna." 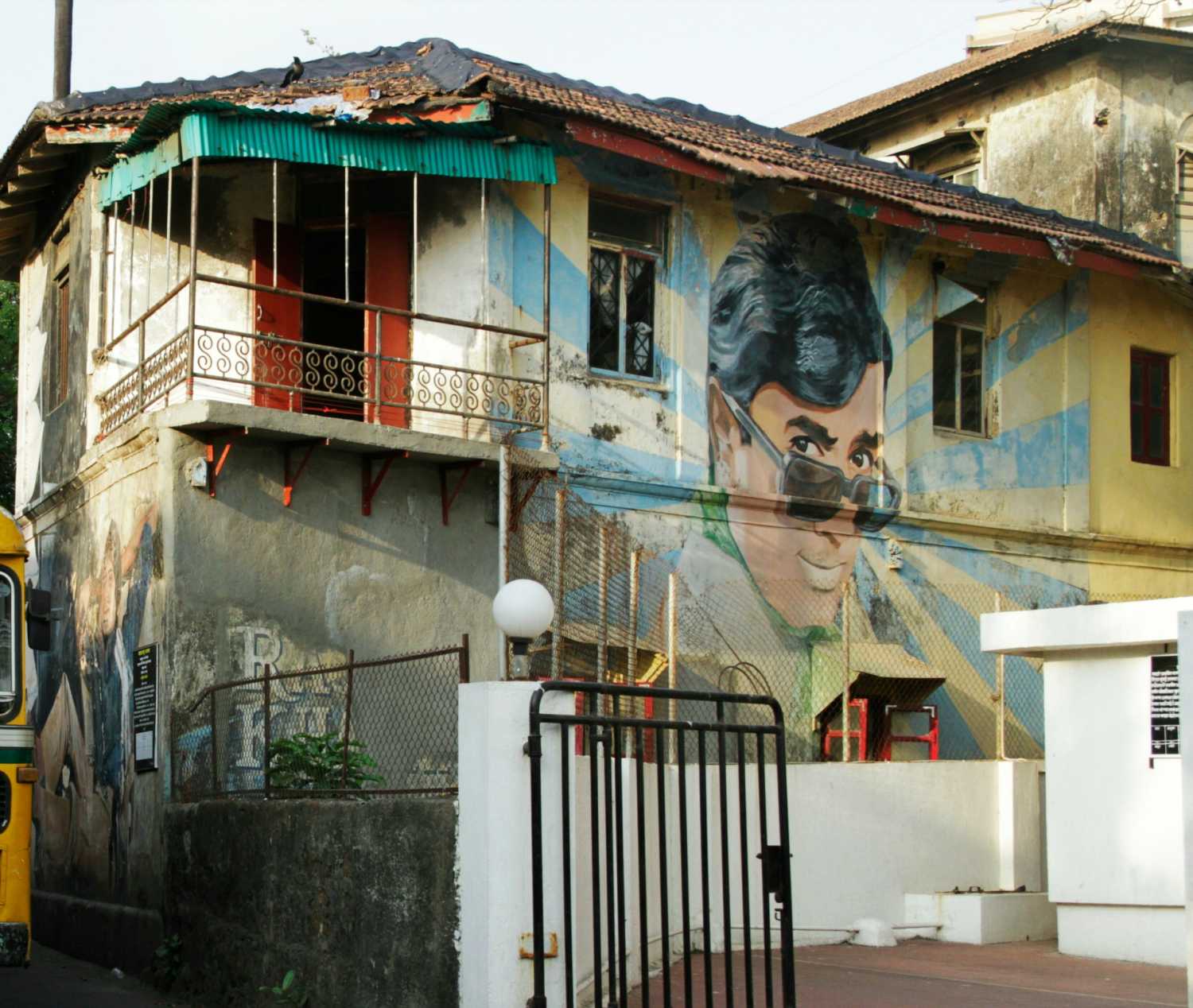 Incidentally, it was to celebrate the centenary of Indian cinema that Dahiya started the Bollywood Art Project. The celebration paid tribute to the man who started it all — Dadasaheb Phalke. "It was a huge project," Dahiya recalls. "I worked in collaboration with ST.Art, a street art group." It was an apt tribute. Phalke himself worked as a protege of the great artist Raja Ravi Varma, from whom he learnt the art of printing and portraiture. The influence of Raja Ravi Varma's new take on Indian mythology is something that came through in Phalke's early and iconic films.

Yet, what makes these street artists take up the job? For Dahiya, it was an accidental inspiration. "It happened when I was working in Mumbai," he says. "I was roaming in the streets one day and saw someone who was projecting and painting in the street. I asked her if I could help. To her surprise, I painted very fast... After three months, she called me up and invited me to Paris. It was there that I painted a 12x32 foot poster of Amitabh Bachchan in Sarkar Raj (2008). Then it struck me that I should take cinema to art in the streets."

For Goradia, however, it was something simpler, the need for a challenge. "I was not really a street artist," she says. "I just took it up as a challenge."

The murals also offer these artists a platform to express some radical ideas that might otherwise not be accepted. Goradia, whose 'Breaking The Silence' was an effort to speak up about violence against women, says, "If you look at Hindi cinema, women are not really stand-out characters. They are often secondary. Lately, movies like Dangal (2016) have begun to change the perception, but I wanted to pick women to deliver my message. If you look at my murals they are hard-hitting, and I wanted these women to convey that very particular emotion. I wanted it to come out through the female heroines, not the male heroes." 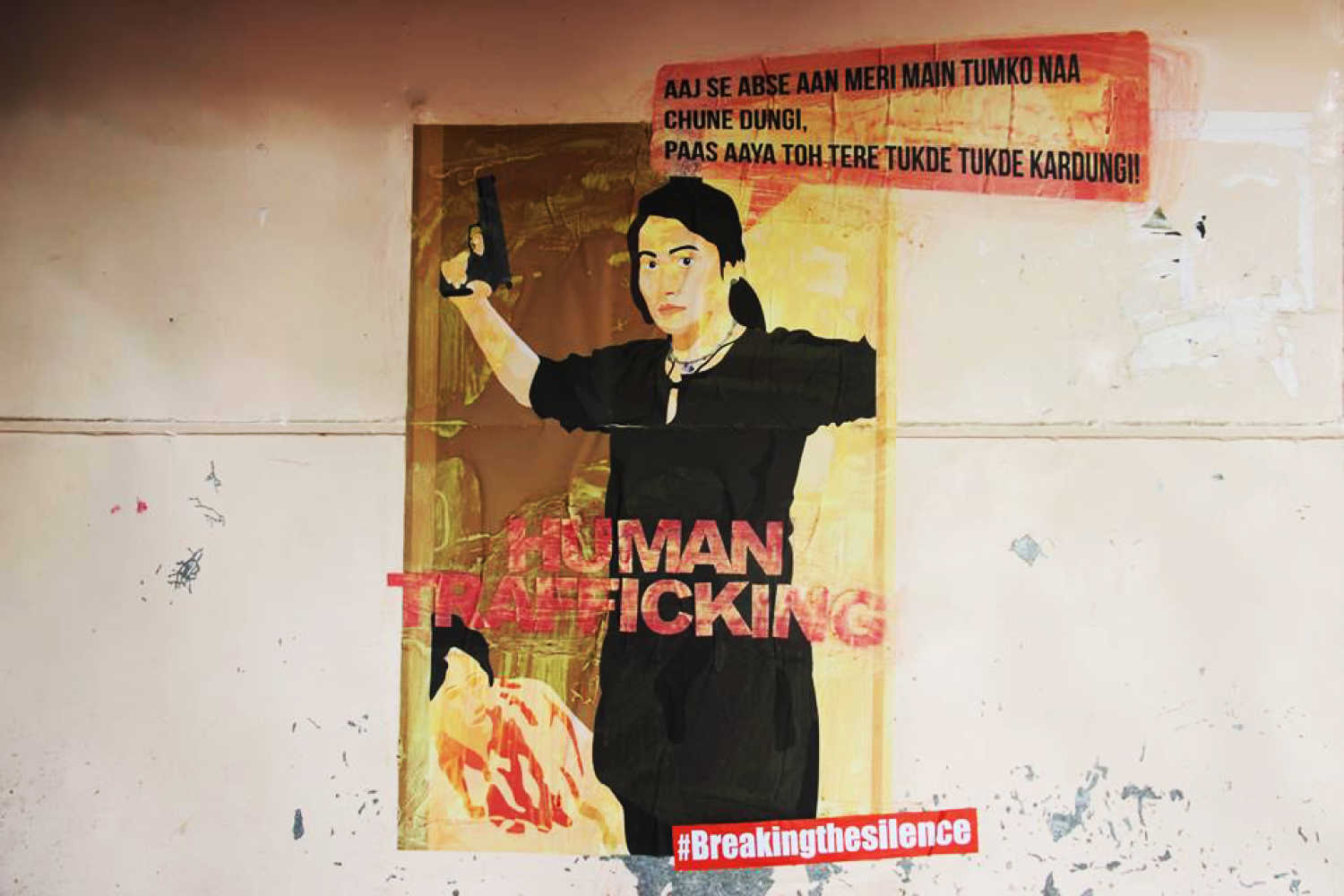 Goradia's murals feature Vidya Balan, Aishwarya Rai, Rani Mukerji and Kareena Kapoor Khan as symbols of brave women that need to take over the streets, like her murals have.

When communicating something so necessary, there can be few better media than Hindi cinema. But it is not always radical. Some street art evokes nostalgia. Dahiya's favourite anecdote is that of a woman who walked up to him while he was painting Bina Rai's Anarkali (1953) and spoke about her first 'date' with her husband. Says Dahiya, "She started talking about her story. She told me she went to watch the film with her husband, back in the time when Pradeep Kumar was her favourite actor. They always connect with films in India."

Brands are using this connection to great effect. Viacom recently launched a campaign painting over flyovers in Mumbai with the help of artist Rob. These artworks used recent films like Bhaag Milkha Bhaag (2013) and Mary Kom (2014) to promote messages of cleanliness. 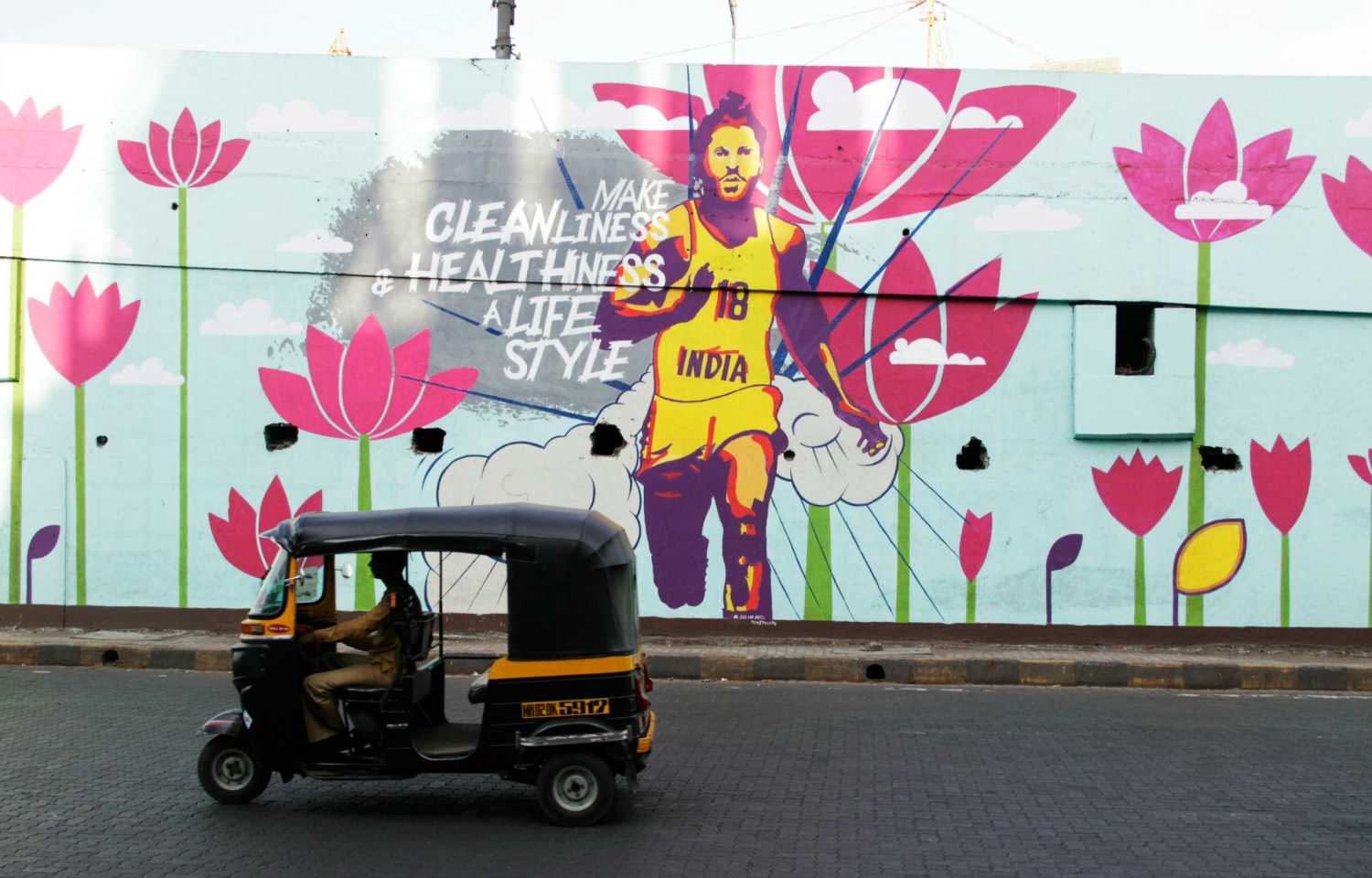 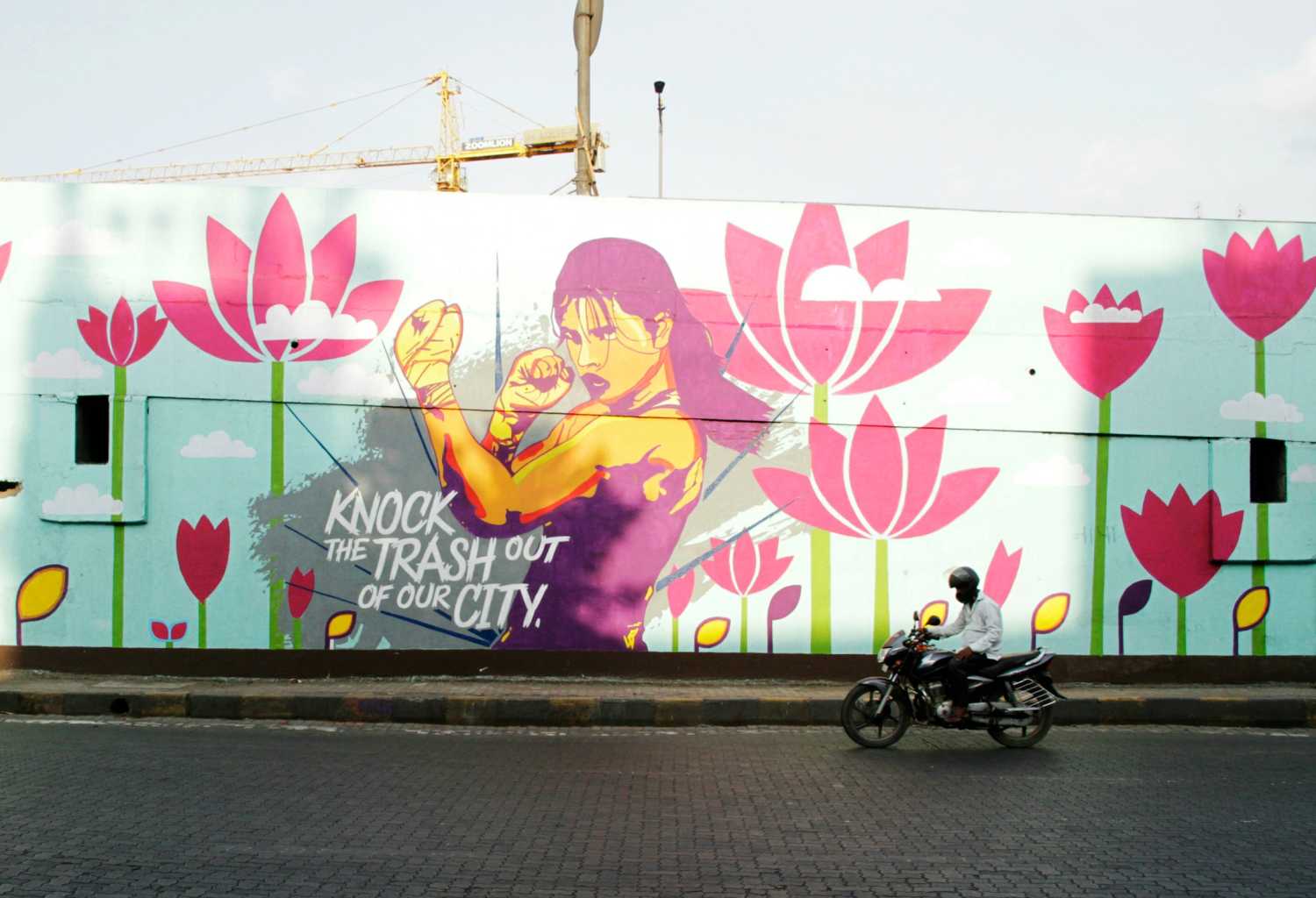 Not all murals depict younger stars. Dahiya's latest mural on Bandra's Hill Road is that of the first couple of Hindi cinema, Dilip Kumar and Saira Banu. Says Dahiya, "I really wanted to paint one of Dilip Kumar and Saira Banu because [they are] one of the oldest couples of the industry. Dilip saheb had his birthday coming up, so I really wanted to put up an image of his in the city." 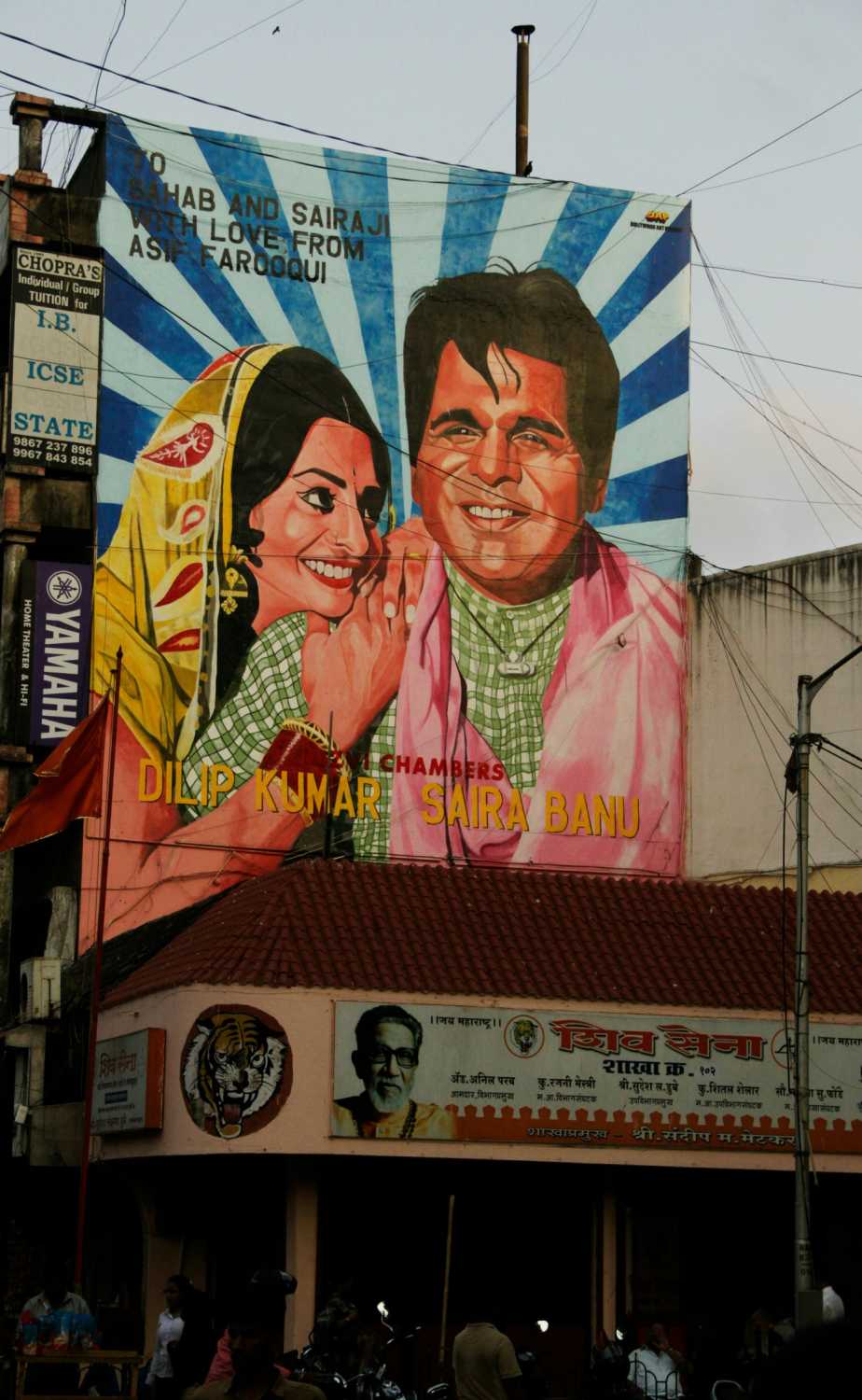 It is not just Mumbai. The project has also worked in other cities. Street Art Chennai, Bangalore, and Delhi are among the cities that are finding new waves of artists arriving every year. Chennai and Bangalore have already hosted international festivals over the past couple of years. Sample this brillliant piece in Chennai based on Tamil cinema icons, Sivaji Ganesan and Padmini.

"Art should comfort the disturbed and disturb the comfortable," is one of Banksy's famous quotes. The anonymous artist is known for leaving touching portraits of humanism and zeitgeist on the walls of cities he visits. Not many people even know what he looks like. It is this sudden blooming of colour, philosophy, and politics that makes street art so effective. It is also the reason why in a growingly stymied and conservative environment, artists are taking to the street in search of a better canvas.

In a city like Mumbai, driven by its commercial overlords, pursuing such a passion, despite its cultural value, is not feasible. In a city like Mumbai, where people never stop dreaming, or working, cinema remains the most accessible form of actualization for most. It is aspirational, escapist, and beautiful. It is why crowds spend weekends standing outside Salman Khan's Galaxy apartments or Shah Rukh Khan's bungalow Mannat, hoping to catch a glimpse of their favourite stars. For those that cannot get through the crowd, there is always a star posing on a wall in Juhu or Bandra.