For the music composer’s 103rd birth anniversary, his daughter Shikha Vohra spoke to Cinestaan about her father’s early influences and how he coaxed a nervous Mukesh to sing the song ‘Dil Jalta Hai’ from Pehli Nazar (1945).

Shikha Vohra grew up in a film family - her mother is actress Ashalata Biswas and her father Anil Biswas, a music composer, but growing up she said she wasn’t aware that her parents were famous. She recalled, “I remember I went to see this film Rahi (1953) at Broadway cinema. I saw my dad’s name on the marquee. I must have been seven years old. I was so excited [that] started jumping and telling my brother, ‘Look, our father’s name is up there’.”

That was the first time, she shared that she realised what her father does. Singers Lata Mangeshkar, and Talat Mehmood dropped by their home but it took her a while to figure out that her father Anil had a career in music. Now of course, she has written much about the history of Indian film music and even penned a fictional book, The Lure of Old Tunes, set against the backdrop of the film world.

Anil Biswas, a top music composer in the 1940s and 1950s, was instrumental in shaping the early careers of singers like Mukesh, Talat Mehmood, Lata Mangeshkar and even introduced singer Sudha Malhotra with the film Arzoo (1950). As a young man, he grew up in Orissa, East Bengal and never learnt music formally.

Vohra said, “His mother was learning music and he would hide behind the door and listen to whatever was taught to her. Then he would rush to the river front where nobody was around and sing whatever he had heard. But obviously, he was some kind of prodigy because at the age of four, he was playing tabla. By 11, he’d given his first tabla recital. Then he got involved in the revolutionary activities.”

Anil Biswas ran away from home to Kolkata at a young age and held down lots of different jobs – teaching music to children through the help of his friend, the flautist Pannalal Ghosh and working as a tea boy in a dhaba. For many years, he had no home and used to sleep in the verandah of a post office.

He was jailed many times for his involvement in the freedom fight and later worked for a couple of years at the Rangamahal theatres where he learnt more about classical music. Vohra remembers that he was very well-versed in the raags despite having no early training.

Biswas came to Mumbai in 1934 and eventually debuted as a music composer with Dharam Ki Devi (1935). He worked steadily after that and got his first musical hit with Mehboob Khan’s Jagirdar (1937). The filmmaker and him formed a strong partnership that continued on with Aurat (1940) and Roti (1942). 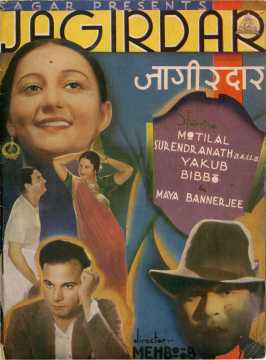 The highlight of Anil Biswas’s career was with Bombay Talkies’ Kismet (1943) which ran at Calcutta's Roxy theatre for three straight years. The patriotic song from the film 'Door Hato O Duniyawalon', also caused concern amongst the British censors but was a hit with the people.

Thereafter he continued to dazzle with his compositions in films like Jwar Bhatta (1944) and Milan (1946). Interestingly, Shikha Vohra revealed that her father used run a weekly gathering of intellectuals from the film industry on Sundays during this period of growth for Indian cinema.
She said, “They had to every week write something and they would create something and recite all that. It had to be non-filmi. And at that end of it, there was a pandit named Chandrashekhar who would read a part from the Ramyana and then there would be a discussion on that. It was very artistic, very high-brow.”

Vohra remembers the attendees like CL Kavish, the scriptwriter, Phani Majumdar, Mahesh Kaul, Ramanand Sagar and Pandit Narendra Sharma. Sometimes even Majrooh Sultanpuri and Talat Mahmood used to join them. “There was a core group and then other people used to come. That whole period belonged to these thinkers and philosophers and then you come to this period which has mindless entertainment,” she explained.

There was a profound shift then in the way movies were made. It shifted for serious, artistic cinema to lighter entertainment. Her father stopped composing in 1963. Many more composers have come since then but Anil Biswas’s compositions remained unique and irreplaceable.

He himself was a good singer but with the growth of playback singers, he stepped back and let them take the limelight. Shikha Vohra narrated the story of how the song ‘Dil Jalta Hain’ from Pehli Nazar (1954) came to be.

She said her father felt he was the best person to express his own tunes but Mukesh changed all of that with ‘Dil Jalta Hain’. She recounted: It is his composition and he called Mukesh. During the rehearsal, Mukesh could not deliver on the complexities of the song. My dad told him that you leave it, you’re not getting the song right. Apparently Mukesh went and told people, ‘If composers sing their own songs, what is going to happen to us singers? What is the future for us?’ Somehow this reached my dad and he said, ‘You have a point, okay, you only sing.’ On the day of the recording, they were at Famous Studios in Tardeo. The musicians had finished and Mukesh had not arrived. My dad was getting very upset.

After all the hullabaloo about wanting to sing the song, Mukesh didn’t show up at the recording. Vohra continued, “Somebody told him that he’s sitting at a bar in Chowpatty, drinking away, because he is very nervous and now he feels he won’t be able to sing. He was [under] stress and pressure. He’s drinking for courage. [My dad] ran to the bar and literally picked him up by the collar. Mukesh was quite drunk by that time and put his head under the tap and gave him a full glass of black coffee. You had said what will happen to singers? You better sing the song now. There were rumours that he had slapped him which is not true.”

Anil Biswas did his best to shake him out of the haze he was under. “Apparently Mukesh was so sobered up after that, he sang that song very satisfactory in one take. It was amazing for a newcomer. My dad said after the song was played back, there was total silence in the hall because there was not a dry eye in the studio,” she ended the story.

Anil Biswas took a vow that he will never sing after this incident. The family has a recording of Biswas singing ‘Dil Jalta Hai’ in his own voice. The song ended up changing Mukesh’s whole life.

Shikha’s own favourite amongst her father’s compositions are the songs sung by Lata Mangeshkar. She prefers the song ‘So Gayi Chandni’ from Akash (1953). “The construction of that song is very unique. It’s only antaras, it travels and meanders on like a river. ‘Rhoot Ke Tum Jo Chal Diye’ is another favourite. Jalti Nishani (1957), starring Geeta Bali, only ran for one week,” she said.