The director of Marathi films, Half Ticket and Aayna Ka Bayna speaks about his first Hindi film, which has one of the quirkiest titles.

In today's times, we can see filmmakers having a no-holds-barred attitude not only with regards to the content but also the title. In the case of director Samit Kakkad’s next film, it is both. It is a Hindi film titled Ascharya – Fuck It!

During a conversation with Cinestaan.com, he got talking about his film with a quirky title. “Ascharya – Fuck It! is, in essence, about worlds colliding. It is about how desire and greed intertwine the lives of a Bollywood star, his chauffeur, a prostitute and her pimp in an unlikely love story. It is not a heightened version that is depicted in other films, but a more truer version of the city,” he said.

Ascharya – Fuck It! has a connection with two diverse art personalities, author Sadat Hassan Manto and filmmaker Quentin Tarantino. “It is inspired by Manto, who I think was one of the greatest and passionate writers. The idea was to take the world of Manto and mix it with the world of Quentin Tarantino; taking two storytellers and making something that hasn’t been seen before on screen. The end product is something different and something original that does honour both Manto and Tarantino,” added Kakkad. 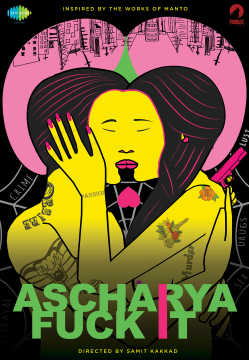 He added that only the characters are inspired from Manto’s stories. “But it’s a complete abstract to what it was in that era. There was a quote by him which puts the whole film into perspective. It said, ‘If you find my stories dirty, the society you are living in is dirty. With my stories, I only expose the truth.’ So, this film is about exposing the truth that underlies the shiny veneer of the film industry. I am absolutely looking forward as this is one film that shows the truth of the society. Thanks to SaReGaMa, the film has shaped up in a way we wanted to.”

Before this one, Kakkad has directed two Marathi films, Aayna Ka Bayna (2012) and Half Ticket (2016). The latter, which also starred Bose, has been appreciated in a number of film festivals abroad and it recently won the Ecumenial Jury Award at the 57th Zlin International Film Festival.