On her 91st birth anniversary (4 July), we recall the beautiful actress whose imposing presence made her unforgettable.

The actress Veena, birth name Tajour Sultana, was born in Quetta, Baluchistan (now in Pakistan), on the same date as another beautiful actress, Naseem Banu, who had a decade over her contemporary. The two actresses were similar in looks and worked around the same period of the 1940s and 1950s. However, Naseem Banu retired from films and later concentrated on guiding her daughter Saira Banu after she made her debut with Junglee (1961).

Veena (also known as Veena Kumari) made her debut at 16 in a Mehboob Khan production, Garib (1942), and continued working until the 1980s when she was a part of Kamal Amrohi’s Razia Sultan (1983) as the empress Shah Turkhan. Her regal bearing and manner meant that she was often cast as royalty or as the daughter in a rich household. 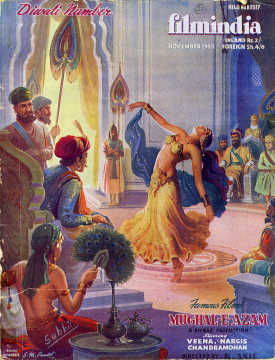 Veena was meant to play Bahar, a court attendant to empress Jodhabai, in K Asif’s Mughal-e-Azam when it was first launched in November 1945. Bahar vies with Anarkali for prince Salim’s affection. When she realizes that the two are already in love, she reports their affair to Salim’s father, the emperor Akbar.

The actress had earlier appeared in K Asif’s Phool (1944) and the director cast her again in his magnum opus. However, the project, which began with Veena, Chandramohan and Nargis, got delayed over the years and was eventually completed and released with Prithviraj Kapoor, Dilip Kumar and Madhubala in 1960. Nigar Sultana stepped in to play Bahar.

Another standout role for Veena came in AR Kardar’s Dastan (1950), a remake of Samuel Goldwyn’s Enchantment (1948), with co-stars Raj Kapoor, Al-Nasir and Suraiya. She played Rani, the elder sister of Raj Kapoor and Al-Nasir’s characters. In real life, she had married Al-Nasir in 1947. The two artistes, who worked together in a number of films like Amarsingh Rathaur (1956), had two children and Veena continued acting even after marriage.

Her role in Dastan, as a haughty, vindictive head of the family, got her positive reviews. The Motion Picture magazine wrote in December 1950, “Veena puts over the role of this proud, defiant woman with an ability which really astounded me. She brings into life the spirit of grim, sordid obstinacy verging to hate, which cleaves and slashes its way with relentless persistence, the unbending hauteur, the scorn and the flash of anger and contempt. In Dastan Veena’s was the best work of the picture and the greatest role of her career.”

Other notable roles were in Kaagaz Ke Phool (1959) in which she played Guru Dutt’s character Suresh Sinha's wife Bina, who separates from her filmmaker husband when he grows close to his newest find on the movie set. Another delayed film in which Veena got to essay a role was Kamal Amrohi’s Pakeezah (1972) in which she played Nawabjaan, sister of Meena Kumari’s Sahibjaan, who raises her lookalike daughter in the brothel.

Veena retired in early 1983 after another Kamal Amrohi production, Razia Sultan, in which she again took on a royal role as the wife of emperor Iltutmish (Pradeep Kumar), empress Shah Turkhan.

The actress, who stayed on in India after Partition, died in Mumbai on 14 November 2004 after being away from the limelight for over two decades.