The filmmaker speaks about his last film Half Ticket and the need of the hour for Marathi cinema.

Kakkad's debut Marathi film, Aayna Ka Bayna (2012), too travelled to a number of international festivals. In an exclusive conversation, the director shared his Half Ticket experience and views on the current scenario in Marathi cinema. Excerpts:

Half Ticket has been screened and appreciated at various festivals.

I think it’s well deserved. It was overwhelming. I think a film like Half Ticket is a universal film. It appeals to all classes of society. Also, while watching it, you tend to relive your own childhood. Every kid would have experienced a desire which wasn't fulfilled, or which they had to struggle to fulfil. While making the film, I relived my childhood. My grandfather was born in a slum at Cotton Green where the film was shot. I haven’t stayed there, but I have visited it a lot. For me, it was like going back home. It was important also because after running after things for so many years, you miss out on your childhood.

With this film I could feel that the gap between the rich and the poor has never reduced. But in an actual sense, the rich and the poor are also immediate neighbours. I see a boy daily selling balloons. Sometimes I buy from him. When I don’t, I wonder after a few hours what would have happened to him. The gap is in your face. Half Ticket made me realize this and the fact that we are all the same.

At international film festivals, people from different countries who don’t even know your language watch your film and start an interaction, which is very interesting. People from the Czech Republic, France, America, Canada, Brazil or the Netherlands talk about your film. They relate to it as everybody has gone through [this experience].

What else did you experience while shooting at a place you used to visit as a child?

During the shoot, I was having bangda [mackerel] fry from the woman next door. The taste of the bangda was the same, maybe better. Sometimes I used to buy fish and ask her to cook. And she used to make it in her zopadpatti [shanty] on her tawa [pan]. We have created this gap. It should go away.

The film is adapted from the Tamil film Kaaka Muttai (2016). Many who are not aware of Southern cinema feel they only make masala action films. But your film made them realize that they make sensible and realistic films too.

Absolutely, they do. That’s the reason I have given credit to Mr Manikandan [director] and Kaaka Muttai in the front title. Otherwise, Half Ticket could have never been made. There are many people who do adaptions [remakes] but don’t admit it. I wanted to say it loud and clear. But the big difference in Half Ticket was that I made Mumbai a character in the movie. It suits Mumbai more.

How and when did you get into filmmaking?

It was because of my father [Amar Kakkad]. The first time I went on a shooting set, saw a camera and the director’s viewfinder, the lights, the clapperboard, came to know what is pre-production and everything else, was because of my father. He has made many documentaries and advertisement films. He was also into theatre. For one play, I did the backstage. So, this was my learning process. That’s why I say my father is also my cinema father.

After my final year exam in college, I started as an assistant editor for TV serials. I have done around 200 episodes as an editor. I was then with Mahesh Manjrekar for seven or eight films like Kurukshetra (2000), Astitva (2000), Jis Desh Mein Ganga Rehta Hai (2000), Tera Mera Saath Rahen (2001), Pitaah (2002) and so on. At the same time, I used to work with my dad. I and a friend opened an advertising agency after that. Then I met Rahul Dholakia and became his associate director for Lamhaa (2010).

Later, I, Dad and Mom decided we should produce the Marathi film Huppa Huiyya (2010). It was a beautiful, simple story and it had to be told. This was followed by Aayna Ka Bayna (2012), which I produced and directed. It went to more than 15 international festivals. It was the first Marathi movie to be dubbed in Hindi. 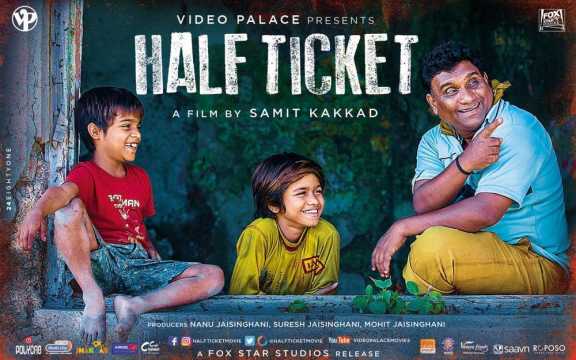 You already knew the process of filmmaking before you assisted Mahesh Manjrekar. How much did it help you as an associate director?

I was lucky. Because of my dad, I knew a lot of things. I believe in learning every day. So I used to learn more from Manjrekar every day and from whomever I met. This helped me grow as a filmmaker and a human being. I keep watching a lot of films. I still watch the Friday first day first show, just like you. The only thing is I don’t write about them. The working styles of my dad, Manjrekar and Dholakia are very different. My style is absolutely different from all three of them. But you learn something or the other from everyone. It helps you to learn, grow more, understand and rectify your mistakes and still make a fresh mistake, then again rectify it.

You don’t speak Marathi at home. Yet you are passionate about Marathi cinema.

I was born in Maharashtra. I call the city Mumbai but I still say Bombay sometimes, out of feeling. I know Marathi but I speak it a little wrong. I only remember my dialogues by heart. So, I make sure I know all the points by heart. At the end of the day, film is a visual medium. It’s a craft. You don’t need a language. A film has no language. We watch French, Czech and American films and they watch our films. If you remember, Richard Attenborough’s Gandhi (1982) was in English. And look at Baahubali’s success here. And I had seen Kaaka Muttai in a theatre. So, anyone who wants to tell a story can do so with the right ingredients. I had intended to make Aayna Ka Bayna in Hindi. But because of finance and other things we couldn’t. Then we thought why don’t we make it in Marathi. Something like this was never tried in Marathi.

What is needed to ensure that more Marathi films go to international festivals?

The answer is content. Content is king. Other Marathi films like Fandry (2014) also went to many international festivals. Thanks to Vivek Kajaria, Half Ticket is going to a lot of festivals. They are the sales representatives for the film. The problem with Marathi is that people first think about satellite rights. The second thing is that subsidy should be stopped. Marathi cinema isn’t able to go to a level where it should because there is so much quantity. Hundred-plus films are made with an average cost of Rs2 crore. Of these, only 5-6 films do well. At the end of the day, the entire industry is at a loss.

There are many players who came into the market due to the subsidy. A lot of people have been saying this, but the subsidy isn’t being stopped. People should believe in what they are making. They should not make anything just because one film did well. Don’t jump into the water just because one guy knows how to swim. He is not going to save you.

What is the need of the hour for Marathi cinema, in your opinion?

A lot of people don’t go to see films. They should be proud of their language, Marathi. Why is South cinema so big? Because they are proud of their languages. They make gods out of their actors. I am not saying the audience should do that here because god is only one. But they should start loving their language. When that happens, nobody can stop Marathi cinema because we have delivered very good content. Just see how many Marathi films are winning National awards. But there is a small gap that should be filled. This will happen when fewer films are made. How will one family watch all films when three films are released together?

Hollywood films are released in Marathi, Tamil and Telugu. There should come a day when a Marathi film is also released in Hindi, Tamil, Telugu and English. That should be the aim. But it is only the audience that can make this possible. There are good films which don’t get good openings. People feel they will watch them later or on TV. Thanks to digital, a lot of people don’t go to theatres. But some films aren’t getting sold to satellite.

Marketing has been a problem with Marathi cinema.

First only think about making a good film. It shouldn’t be about audio sales and box office. These things come later. Make a good film and then market it well. Give it that time. Do a good promotion. See to it that your film reaches the audience. Your 20,000 likes won’t convert to tickets. Get to the ground level. Meet people. That converts into tickets.

You can even hire someone for it. You can’t do everything. You are a filmmaker. You can’t be a marketer. And remember that Marathi is a content-driven industry; not star-driven. But because of so much quantity coming in, the content is losing. Don’t ape Hindi films. Marathi audiences must have already seen it. Make a film relatable for them. But now films need to have universal appeal also. It’s not that the film should only do well in Sangli and Kolhapur.

Your web film Ascharya – Fuck It! is also ready. In today’s times, the title itself won’t get passed by the Central Board of Film Certification if one were to seek a theatrical release for it. What can be a solution to these problems?

I personally feel that [CBFC chief] Mr Pahlaj Nihalani should be stopped, now. Get a person who is more responsible, sensible, someone who understands cinema. Filmmakers should unite asap, else it would be very bad for the industry and creative ideas of filmmakers. Freedom of speech and expression is very important.