On her 8th death anniversary (28 July), we look at how the filmmaker chose Naidu to star in his 1960 film with Balraj Sahni. The film is based on a short story by Sachin Bhowmick.

Before he became a director, Hrishikesh Mukherjee worked as an editor for the legendary Bimal Roy on films like Parineeta (1953) and Devdas (1955). He became a director with Musafir (1957), which interestingly, featured a house as the main character, narrating tales of its inhabitants. The film wasn't received as well as he would have liked, but the new director bounced back with Anari (1959) starring Raj Kapoor and Nutan.

In his third feature, Anuradha (1960), he introduced a new face - Leela Naidu. She was the daughter of nuclear scientist Dr. Ramaiah Naidu and his Swiss-French wife Marthe, a journalist. The young woman had grown up in India and France.

Leela Naidu, who had been Miss India in 1954, had already turned down Raj Kapoor's offer to sign her for a four film contract. Kapoor had been thinking to adapt Mulk Raj Anand’s story The Goddess and the Tractor into a film. Leela made it all the way to RK Studios for a photo shoot, where they checked out how she would look onscreen.

While Naidu thought she was preparing to play a simple village girl, Raj Kapoor was looking towards the future and asked her to change into a black satin pantsuit. It was then she discovered that Kapoor wanted her for a four film contract. Naidu wrote him a polite note declining his offer.

Raj Kapoor had first spotted Leela Naidu as a guest at his brother Shammi’s wedding. But it was quite by accident that Hrishikesh Mukherjee happened to spot Leela. Author Jerry Pinto, in collaboration with Leela Naidu, has written a book about her titled - Leela: A Patchwork Life. Published in 2010, the book narrates Leela's life experiences, made interesting with anecdotes. 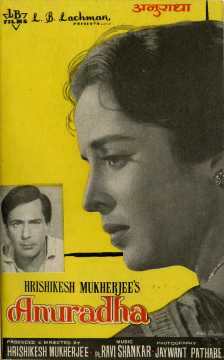 In the book, she recalls how Anuradha came about, through the intervention of a few photographs. “My film career began with three frames that remained on a roll of photographic film. Kamala Chakraborty, the widow of [filmmaker] Ameya Chakraborty, had been shooting textiles or handicrafts as part of the work she did with Pupul Jaykar. Then she came to visit us at Sujan Singh Park and since had three frames left, she used them to take pictures of me,” she remembers.

Those three pictures where the ones that Hrishikesh Mukherjee looked at when he went over to see her. Chakraborty told Naidu that when he saw them, he said, ‘She is my Anuradha.’ Without knowing much about her, he knew that she was the right person to fit in his story. However, Mukherjee was shocked to find out that Leela Naidu wasn’t so keen to join films and had said no to Raj Kapoor already.

But the director was most insistent and sent over the script for Naidu to read. She liked the story of a young woman, Anuradha, who gives up her well-off lifestyle in the city to go live with her husband Nirmal (Balraj Sahni), a simple village doctor. Over time, the two drift apart and Anuradha reflects on all she has given up to be with him.

In the book, she recalls that the costume and makeup department had several thoughts on what a woman living in a village should look like. Naidu didn’t think it necessary for her character to wear false eyelashes, for example. She also noted that Mukherjee, a director, gave her suggestions but did not direct much. However, the director had a keen eye for where his story should go.

Naidu narrates an incident in the book that second her claim. The film’s ending had her character sweeping the floor, with tears in her eyes. Her co-star Sahni suggested to Mukherjee that Anuradha should ask her husband to get a kilo of tomatoes from the market.

She recounts, "I knew where he was going with that one. It would shift the focus from Anuradha’s sacrifice to the doctor’s response. Luckily, Hrishida saw it too and told him he would think about it. I never had to ask for tomatoes and was grateful that I didn’t have to fight that one. Perhaps, it was something to do with the fact that Hrishida was a mathematician. That showed in his cutting of the shots, which was precise and economical. It also showed in the logic in the exposition of his films. If the film was called Anuradha and the internal struggle was Anuradha’s against her circumstances, it seemed odd that it should end on a kilo of tomatoes and reaction shot from the circumstances!"

Naidu, once named one of the world’s beautiful women, only acted in a handful of Hindi films thereatfter. The most notable of these were Yeh Rastey Hain Pyar Ke (1963), based on the famous 1959 KM Nanavati murder, and Shyam Benegal’s Trikal (1985).