The timeless music of SD Burman on Hrishikesh Mukherjee’s Abhimaan


The 1973 feature film was produced under the banner of Amiya Productions, a joint project by the newly wed couple, Amitabh and Jaya Bachchan. The film’s producers Pawan Kumar and Susheela Kamat were the secretaries of Amitabh and Jaya, respectively.

Hrishikesh Mukherjee’s Abhimaan released on 27 July, nearly two months after his two leads, Amitabh Bachchan and Jaya Bachchan (then Bhaduri) were married on 3 June. Mukherjee had worked with Amitabh in Anand (1971) and Jaya in Guddi (1971) and Bawarchi (1972).

The screenplay, by Nabendu Ghosh, and dialogues by Rajendra Singh Bedi, tells the story of Subir, a popular singer who still feels unfulfilled in his life. He meets Uma and falls in love with her while visiting his aunt at her village. They are married soon after. Uma has been trained in classical music by her father, a singer, and is a talent waiting to be discovered. 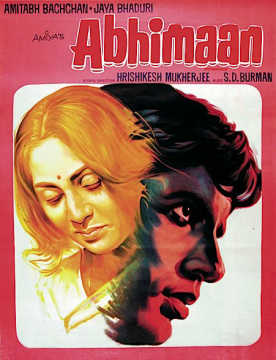 Once the honeymoon period is over, and Uma is asked to sing at events with her husband, the jealous, insecure monster in Subir slowly begins to emerge. The unspoken elephant in the room is that Uma is more gifted singer between the two. The two go their separate ways until a tragedy brings them back together again.

In a more matured and layered performance as Uma than her youthful turns in Guddi and Bawarchi, Jaya won her first Filmfare award for best actress. 1973 was a landmark turn for Amitabh Bachchan with his emergence as the ‘Angry Young Man’.

But the real draw of the film was its music by SD Burman. The story revolves around two singers and it was imperative that the right music composer should bring justice to the album. By age 67, the veteran composer had already had two heart attacks but was still going strong. His wife Meera Dev Burman helped him as his assistant on the film.

All seven songs of the album were penned by Majrooh Sultanpuri. Burman used the voices of Kishore Kumar, Mohammed Rafi and Manhar Udhas for Amitabh and only Lata Mangeshkar for Jaya. The songs ‘Tere Mere Milan Ki Yeh Raina’ and ‘Meet Na Mila Re Man Ka’ went on to be the top songs of that year.

For the song ‘Nadiya Kinare’ sung by Lata Mangeshkar, SD Burman probably evoked his classical training from Ustad Badal Khan and Ustad Allauddin Khan as a young man. He incorporated several elements of nature into the song as well.

In Jai Arjun Singh’s book on the filmmaker, The World Of Hrishikesh Mukherjee, the author writes that Mukherjee grew up with classical music in his home. He played the sitar for All India Radio and collaborated with SD Burman to create a soundtrack befitting the film. The songs fit into the narrative of the film like they’ve always belonged.

Mukherjee admitted in a Rediff interview, "Abhimaan was based on the life of Kishore Kumar. As you know, Kishore’s [first] wife Ruma was no less talented. Since Kishore had a bit of a struggle, early in his career, he was always conscious of Ruma’s gifts as a performer.” However, writer Aalif Surti argued in an online article that the film was based on Ravi Shankar’s failed first marriage with Annapurna Devi, daughter of Ustad Allauddin Khan and sister of Ustad Ali Akbar Khan.

The reality is that is most likely what happens when two talented people in the same field end up marrying. There is bound to be friction and jealously on each other’s successes. If they are secure on their own space, then the relationship will hold. Unlike the film which gave its characters a happier resolution, many real-life marriages failed to make it through. If they did, one partner had to step back in the limelight.

Amitabh and Jaya worked again with their favourite Hrishi-da in Chupke Chupke (1975) and Mili (1975) which, like Abhimaan, have remained afresh in the memories of audiences.