Arjun Kapoor on playing double role: I shared a lot of screen time with myself


The Half Girlfriend actor spoke about the challenging aspects of shooting double role in his upcoming release, Mubarakan.

Arjun Kapoor has nine films in his filmography but with Mubarakan, he’s already tackling a double role for the second time. Earlier, he played twins, Ajay and Vishal, separated at birth in Aurangzeb (2013), Playing double role in Aurangzeb wasn’t very taxing, as both characters rarely came face to face in the same scene.

“I only faced myself once in the course of the film (Aurangzeb). I don’t really have conversations with myself. I didn’t have to switch between Ajay and Vishal in the same scene, barring that one moment. [It was] a different dynamic in terms of every day shooting,” he said at a promotional event for Anees Bazmee’s Mubarakan in which he plays twins Karan and Charan.

During an interview with Cinestaan.com, he explained that he shares a lot of screen time with himself for the majority of Mubarakan. 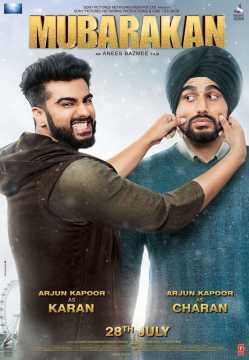 "The challenge in this film is far more superior in terms of being able to retain your character through the madness of switching between Karan and Charan every couple of hours. I became Karan and Charan almost three to four times a day. In the space of an eight-hour shift, I would visit both the characters and do the same material. I had to do the same scene from two points of views. The complexities were far more in terms of the shoot. But that was the charm and the excitement. Also when I read the material, I was excited to do that. As tiring as it is, the result is in front of you when you see it on the big screen. It actually does feel like there are two separate people,” he said.

As he ran down the entire exhaustive, detailed process of changing from one brother to the other, it was evident that the actor had a keen grasp of the entire technical process of creating two characters in the same scene. Screenwriter Balwinder Singh Janjua, aka Bali, was the body double for Arjun in certain scenes where a character he was playing interacted with the other character he played. From a technical viewpoint, Mubarakan is the hardest movie he’s had to film so far.

Mubarakan, starring Anil Kapoor, Ileana D’Cruz, Athiya Shetty and Ratna Pathak Shah, gained some attention after its trailer was released. The film is due to be released on 28 July.