Mehmood, filmmaker who dared to be different


On his 13th death anniversary (23 July), a look at how the actor-producer-director experimented with films off the beaten track whenever he went behind the camera.

Mehmood was often called the ‘King of Comedy’ of Hindi cinema. It is said that many heroes were wary of sharing screen space with him for fear that he would walk away with the kudos. Son of actor-dancer Mumtaz Ali, Mehmood had a long struggle to become a successful actor. He did every kind of odd job from becoming a driver for director PL Santoshi to singing in the chorus with composer-singer Hemant Kumar.

Eventually, the funnyman became much sought after amongst producers and directors for over a decade from the early 1960s through the mid-1970s, winning the Filmfare Best Comedian award four times.

He turned producer quite early with Chhote Nawab (1961) giving himself a lead role opposite actress Ameeta. He was the first to give RD Burman a shot as an independent composer. Prior to this, everyone only knew him as the talented son of SD Burman who assisted his father on a number of films.

In the film, Mehmood himself played a character who must grow up and own up to the responsibilities of the real world. Unlike his other films, where he was introduced as the friend of the hero, or the second lead with a comic track, here Mehmood showed off his acting range as an easily influenced child-like hero who sobers up fast to the harsh realities of life.

He stepped behind the camera as director with Bhoot Bungla (1965), a comedy-horror film. He cast music composer RD Burman for an additional role in the film as his friend and comic sidekick, Tocky. An online rediff.com recommendation of the film states, “In an applause-worthy debut as director, the actor and producer displays his keen sense of script, comic timing and ability to draw the impulsive best from his actors.” With Burman, they were inspired to borrow from the popular Western music of the 1960s, including the hit song ‘Aao Twist Karein’ in the soundtrack.

Along the way, Mehmood backed projects like Do Phool (1973), a comedy starring Ashok Kumar and Vinod Mehra, and Pati Patni (1966), an inner look at a marriage starring Sanjeev Kumar and Nanda. He acted in Pati Patni and was gamely shown in the film’s credits as a cartoon caricature atop a donkey. The film’s producer was his brother Usman Ali.

One of Mehmood’s most famous home productions is Padosan (1968), the cult comedy classic directed by Jyoti Swaroop and starring Sunil Dutt, Saira Banu and Kishore Kumar. Mehmood has a landmark role in the film as music teacher Master Pillai. He and Kishore Kumar were at their creative best in Padosan and completely overshadowed the two leads.

In 1972, Mehmood recommended a tall young man, Amitabh Bachchan, a friend of his brother Anwar Ali, who he thought showed promise for Bombay to Goa, a film made under his own banner. It became Bachchan’s first lead role and, within a year, Amitabh was the actor everybody was talking about. 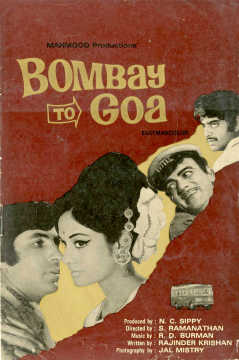 He switched gears with 1974’s Kunwara Baap, a film he directed straight from his heart. The social drama, tinged with moments of humour, showed the debilitating diagnosis of polio, which can be prevented amongst children with the correct vaccine. His own son, Macky, had gone through the same scenario and he cast him to educate the world about the illness.

As a filmmaker, he had a keen sense of the kind of music the audience would like and his directorial ventures always carried a comic sensibility that he himself identified with. In the mid-1970s, with Ginny Aur Johnny (1976), Do Dilwale (1977) and Ek Baap Chhe Bete (1978), he promoted his own sons and comedians like Mohan Choti and Mukri whom Hindi cinema had begun casting less frequently.

His last directorial venture was Dushman Duniya Ka (1996), an attempt to launch his son Manzoor Ali as a lead. However, the cameos of Shah Rukh Khan and Salman Khan loomed larger than Manzoor Ali and the film is remembered more for their special appearances than anything else.

While the quality of films produced by Mehmood may have declined sharply, it showed his interest in wanting to go on the less trodden path. He was always trying something the others weren’t, and the results were hilarious at times (like Padosan), to moving (like Kunwara Baap), to downright silly (like Bombay to Goa). But they always bore his unique stamp.