Vijay Ganguly, Basu's assistant on Jagga Jasoos, shares the remarkable story of his father's journey from the lower rungs of the film industry to directing his own films. Vijay also speaks of his own experience learning the tricks of the trade from his father, a National award-winner.

Courtesy: Vijay Ganguly
give your opinion

The family of Anil Ganguly, born on 26 January 1933 in Burma as Salil Ganguly, moved to Calcutta after Independence. However, young Anil was left behind in the chaos and had to eventually walk all the way to the city.

This incredible start to Ganguly’s life was shared with Cinestaan.com by his son Vijay Ganguly, assistant director and choreographer on the recently released Jagga Jasoos.

Vijay Ganguly spoke at length about the unbelievable experiences that shaped Anil Ganguly’s life before he could become a National award-winning filmmaker. Anil Ganguly is known for directing films like Kora Kagaz (1974) and Tapasya (1975).

As a young man, Anil Ganguly ran away from home in Belgharia, Calcutta, and came to Bombay in 1950 in the hope of meeting actor Ashok Kumar (born Kumudlal Ganguly), who shared a surname with him.

In memoriam: The film personalities we bid goodbye to in 2016

“For a couple of days, he was waiting for Ashok Kumar to come out [of his house]. When Ashok Kumar came out one day, he stopped the car and opened the window and [my father told him], ‘I’ve come from Kolkata, I’ve run and come to Bombay. I want to work with you in the film industry’,” Vijay said.

The star asked the 17-year-old if he had finished his studies. When he replied in the negative, Ashok Kumar asked him to go back home and finish his studies. Anil Ganguly did return home, but after giving school an unsuccessful shot, he once again came back to Bombay.

Anil began his career taking up any odd job available in the film industry. “There was nobody who was giving him work really, so he started singing in chorus' [to cover his] expenses. He used to like to sing, because [of] the whole influence of Kishore Kumar. He didn’t have a place to stay, so he used to sleep on the road. He used to show me the places [where he slept],” Vijay recollected.

After meeting singer Geeta Dutt in a recording studio, the eager Anil ask her how he could learn more about filmmaking. She recommended him to her husband, the actor-director Guru Dutt, and soon he began assisting Guru Dutt. Vijay said, “He was very new so he wasn’t taken seriously. But he was adamant that kuch kaam mila hai, karunga [I’ve got some work, I’ll do it].”

Later, Anil Ganguly moved on to assist director Satyen Bose on a couple of films. He happened to meet actor Pradeep Kumar, who asked Anil to join him on a film he was working on with director Kalidas. Anil went to Satyen Bose to inform him of his decision to leave.

Vijay narrated the incident: “Satyen Bose told him, ‘You’re getting more money here, you’ll get less there. Why are you going? Think about it.’ But Dad said, ‘There the opportunity is more, here the money is more.’ He began working with Kalidas and assisted him on films like Half Ticket (1962) and Bheegi Raat (1965). This whole struggle went on for 14 years.”

Eventually, Anil left director Kalidas when he refused to back a project that Anil wanted to direct. He never went back to work for Kalidas. But he continued to work in the industry, directing a documentary and taking on a project as a ghost director, where someone else would get the credit for his work. But he kept learning throughout these years of struggle, learning film production until the time he got a chance to direct his own film. 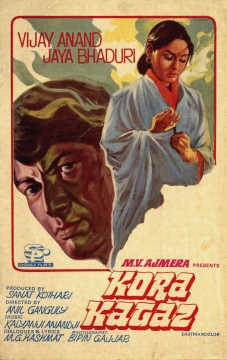 It was Kora Kagaz (1974), a remake of the Bengali film Saat Pake Bandha (1963) starring Suchitra Sen. For the Hindi version, Anil Ganguly signed Jaya Bachchan (then Bhaduri) to star in the film. She won her second consecutive Filmfare award for Kora Kagaz and Anil won his first National award for Best Popular Film Providing Wholesome Entertainment.

Kora Kagaz, incredibly, almost didn’t get made. Just before the film was to go on the floors, the financier backed out. Vijay Ganguly recounted the incident: “Now after 14 years of struggle, he gets his first film and one day before the mahurat, the financier backs out. He [Anil Ganguly] was, like, my life is ruined.”

Anil went to the financier's house and tried to reason with him. But he did not relent.

“The whole night [father] was standing down [outside the financier's house] and the financier kept looking that he wasn’t going,” Vijay continued. "He came down after a couple of hours and said, ‘Anil, go home’. Dad said, ‘My life is over, I can’t do anything. I’m thinking of committing suicide, but problem kya hai, ke main Bengali ka bacha hoon, main akele nahin maroonga, main aapko leke jaaunga [I am a Bengali, I will not die alone, I will take you along].’ The financier got so scared that he said, ‘Anil, you think with a cool head. Hold on, go on with the mahurat, and the rest we will figure out.’ That’s how the mahurat happened.”

The film launched his career. It was a far cry from when he was a lowly assistant director who was slapped by a camera attendant for looking through the lens. ‘Even if we sell you, we won’t get the money for the camera,’ the man had admonished him.

But life has a way of coming full circle. Anil told his son that years later on his second film, Tapasya, the same camera attendant was on his set. “He went and asked Dad, ‘Sir, main camera kahan rakhoon [Sir, where should I put the camera]?’ Dad said that was the biggest achievement in his life. Awards toh milte rahe, par yeh jo satisfaction tha [I have won many awards, but this satisfaction was different],” Vijay recalled.

Vijay said his father taught him everything he knows and he grew up around film sets. “I was born during a film called Trishna (1978), I started walking during a film called Aanchal (1980). That’s how I remember my life. I used to only be on sets and Dad used to take us everywhere,” he said.

His father considered him and his sister Rupali his lucky charms. When they were young, they often featured in small roles in their father’s films. However, unlike with direction, Anil Ganguly had uneven success as a producer, largely because, as Vijay put it, he didn’t understand money. 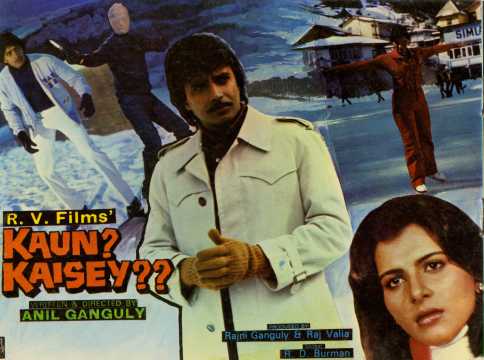 Anil Ganguly’s first film as producer was Kaun? Kaisey?? (1983) starring Mithun Chakraborty. He fell ill after the film flopped, and then gambled all he had on Saaheb (1985), which, fortunately, did well. But his later films also went unnoticed.

“At that time, the whole scene was very different. Now you give it to a studio and they will release your film. Earlier, you had to go to each distributor and sell your film," Vijay explained. "We had trials where people would come from Delhi and Hyderabad. They would watch the film and say we will give this much for the film. Each territory used to get sold. It was a very tedious task. After he started producing films, he went into this strange zone of saying, ‘Yeh toh distributors ko chahiye, yeh toh banani padhegi [Distributors want this, we will have to make it like this]’.”

Vijay also confirmed a quirk about the filmmaker. There are a few reports online that claim Anil Ganguly used to only dress in white. He laughed and said, “At that time, a lot of people used to dress in white. He never wore black, he never wore colours. On set, in life, everything was white. His shoes were white. If you bought him a watch which was gold, he would think twice before wearing it. He was that kind of a person.”

With the constant talk of nepotism one hears in the industry, Anil Ganguly never made it easy for his children. However, he always encouraged them in their professional careers. Vijay remembered, “He always believed that if you want to do something, you have to figure out and do that. If you fail, you will discover what you want to do next.”

Like his father, Vijay learnt about all stages of filmmaking from production to editing. He assisted his father but insisted the experience was too traumatic as his father was too professional with him.

“I wanted to run away because he was a taskmaster with everyone, not just with me,” he recalled good-naturedly. In the office, Vijay would sit outside, and before anyone entered, they would ask, ‘Dada ka mood kaisa hai?’ [How is his mood]? And I used to be like, ‘Aaj theek hai’ [It's fine today] and they used to enter the office. If I said, ‘Aaj kharab mood hai’ [Not good today], they used to make a U-turn and go away, literally.”

As a child, Vijay even acted in Saaheb (1985). He described a hilarious experience where he was almost fired from the film because he couldn’t remember the dialogue. He had been plucked out of school and taken to the sets at Film City, Mumbai.

“I was made to sit on this table and they gave me a pencil and a dialogue which was ‘Main bada hoke goalkeeper banoonga, chachaji ki tarah penalty rakhoonga’ [I'll be a goalkeeper when I grow up, like my uncle]. [At that time] I had no idea what a penalty is, what a goalkeeper is. I am five years old and I can’t say the lines. And [Dad’s] getting upset behind the camera. He is like yeh bachche ko change kardo, doosra bachcha le ke aao [Get another child in],” Vijay said. Eventually, Anil Kapoor, who was also in the scene, helped him out and calmed the director.

Vijay has assisted director Anurag Basu on Jagga Jasoos, which was released on 14 July, and also choreographed the ‘Galti Se Mistake’ song in the film. The project holds a special place in Vijay’s heart, especially the song, ‘Phir Wahi’, sung by Arijit Singh and composed by Pritam.

“When we were shooting this song, Dad had just passed away. When Dada [Anurag Basu] used to play it on set, I used to always choke up. When you see the song now, it is only about the father and the son. It was just so relatable,” he said.

He remembers his father as the real strength of their family. Anil Ganguly was extremely proud of his children and the work they were doing. Vijay would share stories from the sets of Jagga Jasoos. 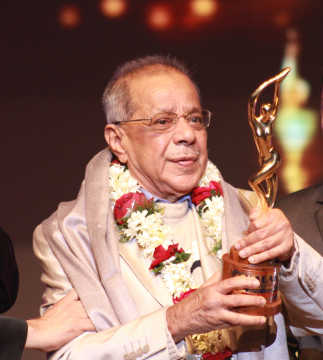 Eventually, he did visit the sets of Jagga Jasoos and see his son in action. Vijay said in the last few months, when he was really sick, they brought him to the film sets, a place he really loved, and he met everyone from director Anurag Basu to lead actor Ranbir Kapoor. Anil had worked with Ranbir’s father Rishi Kapoor in 1987 with Pyar Ke Kaabil.

Anil Ganguly has also given Vijay his go-ahead to remake his older films for today’s generation. “He has already given me a lot of [help]. He has modified the scripts. Our plans are now, Rupali and I, we have our own production company and will focus on that now, make his films and things like that. We want his legacy to be there,” he revealed.