Surjit Singh: Don’t forget the little guys without whom the industry couldn't thrive


On dancer Edwina’s 76th birthday (22 July), Surjit Singh, who has written a book on her, speaks about discovering the elusive background dancer and nurturing his passion to bring the unsung personalities of Indian cinema to the fore.

During the 1950s and the 1960s, a shy, silent background dancer featured in a number of popular songs from films like Dil Deke Dekho (1959) and Teesri Manzil (1966). Often seen as a club member in a song, or a guest at a party scene, Edwina Violette (nee Lyons) managed to win fans over with her presence. She was often uncredited, and there were many in the audience who were left wondering about the charming dancer.

Surjit Singh, now a retired professor of physics who has written a book on Edwina (as she was known in the industry) and many other dancers like her, was one such fan. Since 1999, he has been writing online about Hindi cinema and its music on his own website. 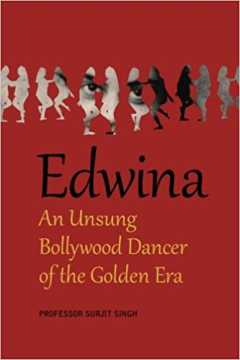 Cinestaan.com spoke with Singh, who lives in San Diego, California, about his fascination about the unknown artistes in the industry. Excerpts:

Your field of study is theoretical physics and you have also written books in that field. How did the opportunity to write a book on Edwina come about?

I have always been interested in Hindi movies and songs for a long time and I have been collecting stuff too. I had decided that when I retire, I will do something [associated with it], write books and so on. Of course, I started a website many years ago where I started [writing about songs].

One of the things that happened is that I found out many of my friends did not know the names of the actors who [appear] again and again. They knew about Jeevan and Pran, but there were many other character actors they just didn’t know. So I put pictures on my website so that people knew that this is Dulari or Anwari Begum, all the different names they hadn’t heard of.

Once, while searching the web, I found out about Greta [Kaemmer’s] website and she had linked to my pictures and that she is also interested in all of these things too. So I started really going to her website and asking questions about who is who and so on. She watches a bit of obscure movies and wondering about obscure things and in one of [her blog posts], she mentioned about Terence Lyons’s band that she saw again and again in movies. Terence’s son actually came on her website and declared he was his son, this is Terence and that girl you see is my aunty Edwina.

So from there I found out about Edwina. And then, from there, my friend got to work and we found out that even though she was uncredited, she appeared in about 100 songs. So then I said, "Well, I must write a book on her."

Eventually, she joined Facebook and we became very good friends and I talked to her quite often. It’s her birthday on 22 July and I have a surprise birthday gift for her that she doesn’t know yet. Her book [Edwina: An Unsung Bollywood Dancer of the Golden Era] is two years old and those people who were interested have bought it already. I’m preparing to put up the book on my website, all 110 pages, for those who don’t want to buy it. They can just read it there.

Do you think without the support and interest of the online community of bloggers and ordinary people, you would have ever found Edwina?

It would have been difficult, let me tell you that. Without the internet, it would have been very difficult, again maybe a string of coincidences will lead to her again. Maybe somebody [would have] spotted her and that may have happened. Earlier, we used to have these Google groups, before Facebook, and lots of people like me were going on that and RMIM [rec.music.indian.misc, a Google group to discuss Indian music]. I have written a book on the history of that as well. We would have asked somebody in Bombay if you have seen this girl, asked the director or producer maybe about her. [But] from her, we have found out about more background dancers.

You have also written about them and their histories, with their photographs, in Indian cinema in the book, which is also important.

Right, I tried to include as many as I could, but there are many more people I have discovered.

Unfortunately, like you wrote, Edwina was only credited for three films.

By getting to know the real Edwina during the course of the book, what did you think of her journey? What did you learn about her?

I thought she was really resilient. In other words, she doesn’t give up, that’s the most important quality I remember about her. She had many setbacks in life in different ways, but she didn’t give up, she continued. She was really interested in going into films, but she stayed with her husband Keith even after he moved to England. There she was lost for a while, but she took classes and worked quite a lot and put herself back together. I liked that about her.

What do you think about her contribution to Hindi cinema? It’s mentioned in the book that she introduced some dances in the songs.

She introduced a few new things, I guess, that’s true, but generally speaking it’s the contribution of background dancers. How many solo dancers will you have? You have to have group dances. Not just her, but all of them together. In India, we have had group dances for a long time, like the raas-leela.

You have called Edwina, the actress Indurani, and others like them 'unsung personalities of Indian cinema'. Why?

Well, my personal feeling is that every person, whether they are successful or not, have contributed in their own way to the film industry, and their contribution should be recorded somehow, if we can find it. I’m very passionate about that. It must be done. Don’t forget the little guys without whom the industry couldn’t actually thrive. If you only have the hero and heroine, how many movies can you make with just two people? You need all these character artistes, background dancers, and all. Many times it’s the same guy coming again and again. People want to know about him, what’s his personal life like, how did he come into the movies? We know everything about Shah Rukh Khan and Dilip Kumar, but we also want to know about Shivraj, Brahma Bharadwaj and Hari Shivadasani. At least I want to know more.

How did your interest in cinema come about, given that you are a man of science, and it’s so specific.

The first movie I saw, Shrimatiji (1952), I was about 16 years old, I fell in love with the movies. I was in a small town and then we moved to Ludhiana where I went to high school. My parents, of course, didn’t like me seeing movies, but I went from school anyway. I was a good student so my studies didn’t suffer.

Most people just see movies and forget about them, but since I’m in physics, you can see that my mind is analytical. How did they film that? I always wondered how did the guy disappear or they jumped this high, so technical aspects I was interested in. I was also interested in how many little guys I kept seeing again and again. Like seeing this girl [Edwina] dancing again and again. It’s a childhood interest that developed and continued, even though I made a living as a physicist.

You also moved away from India, so how did you keep up your interest?

When I came to Canada, video cassettes had just started. We rented the cassettes, recorded songs from them, and I took notes. We didn’t have two VCRs so I watched a movie and took notes in my notebook and kept them for further use and that continued. Then DVDs came. Now I watch on YouTube. Actually, I am trying to find many old movies. Recently, a friend of mine actually found a movie that was supposed to be lost, it’s KL Saigal’s movie Karwaan-e-Hayat (1935). A friend of mine in Delhi found out that somebody has it in Mumbai. He paid Rs25,000 to buy it and he has a copy. KL Saigal and Noor Jehan are my two favourites before Lata Mangeshkar, Mohammed Rafi, Kishore Kumar came along. I couldn’t sleep for two nights when I found out this Saigal movie existed and I’m going to get to see it. He plays a prince who mixes with gypsies and likes to dance. He actually dances in the movie, I am told.

Now how do you keep alive your interest since you have retired? Has it become a full-time hobby?

Absolutely, that’s all I do. Apart from that, I keep my wife happy by buying groceries or going shopping with her. The rest of the time I work on my songs collection, my video collection, and my book and magazine collection. I listen to the songs, label them, and I collect songs every month. My friends are sending them to me, I exchange them with my friends. Mainly Hindi film songs, but other songs too. I have a huge collection.