Aahana Kumra: I want men to get uncomfortable while watching Lipstick Under My Burkha


In an exclusive interview, the actress speaks about why Lipstick Under My Burkha is empowering, and how working on it was an eye-opener for her.

After being lapped up at around 40 film festivals across the world and receiving 11 awards in the last one year, Lipstick Under My Burkha had a different experience back in India as the Central Board of Film Certification (CBFC) refused to certify the film and allow its theatrical release.

When we met one of the four leading ladies of the film, Aahana Kumra, at her home in Andheri in suburban Mumbai, the actress was visibly excited that, after a long battle, the film has reached audiences in India.

Lipstick Under My Burkha review: Fine performances guide this well-written drama of women and their dreams

The theatre actress has previously worked on films like Sona Spa (2013) and The Blueberry Hunt (2016), and starred with Amitabh Bachchan in the TV series Yudh. In Lipstick..., she plays a two-timing beautician Leela looking to escape the stifling circumstances in a small town.

Kumra lived her formative years in Lucknow before moving to Mumbai, but her real life story is far removed from her on-screen portrayal in the film. "My mother was a DSP [deputy superintendent of police]. I have learned fearlessness from her," she said as she sat down to talk about the eye-opening experience of working on a film like Lipstick Under My Burkha, directed by Alankrita Shrivastava. Excerpts from the conversation:

Did you at any point during the making of Lipstick Under My Burkha, or even when you read the script, feel that this film is going to cause the kind of stir it has?

I never really thought about it that much because our shoot was very hectic. Only thing that you worry about at that time is to get your scene right. All of our scenes are crucial and physically exhausting. I was doing a scene at a location where I kiss Vikrant (Massey) and somebody threw a stone at us, and we were asked to get into a tent. At that point of time I was like, some people are going to have a problem with this. And it had never happened in Bhopal. We have shot the whole film there. And we were shooting in Chowk, which has a predominantly Muslim population. We never had a problem before that incident.

While you have got tremendous support on social media, some detractors have been saying 'why do you need to show sex to show women's empowerment'.

Do we always want to show that a woman becomes a doctor or an engineer or she is becoming a sportswoman to be empowered? Why can’t sex be an empowering tool? It is such an important process of our life... of our body. Why can’t we talk about it openly? That is what I am trying to explain out here. How can a woman give birth to a baby? Because she has had sex with her husabnd or with her partner. There is a reason why we choose to have sex with someone — to feel empowered. And at that moment we do feel empowered. I don’t see why this is a problem.

Sexual freedom... freedom to choose is an important part of women’s empowerment...

Educating a woman or getting her to study in a good school or college are not the only things that are empowering. She may be having a miserable life in her bedroom with her husband or boyfriend. Maybe she is in an abusive relationship. That is not empowering. Just because you put on make-up, wear good clothes, go out and work in a multinational firm, have a swanky car drop you, a chauffeur driving you or a doorman opening the door for you is not empowering enough. What is empowering is what you actually feel from within, and some people feel crap from inside because they are really having miserable lives. So why can’t we talk about sex openly, is my question.

How was the filming experience? Had you watched Alankrita’s previous works as a director? 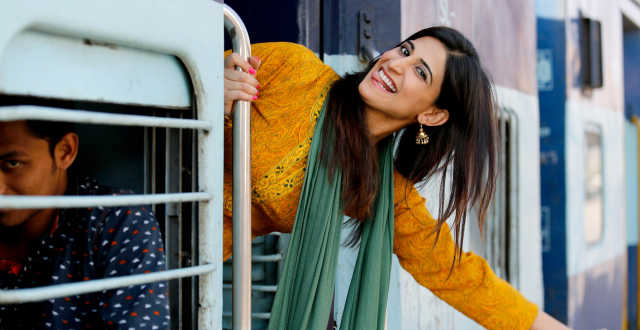 I hadn’t watched Alankrita’s films, unfortunately. When I read this script, though, my mind was blown. I was like, I haven’t read anything like this before and I don’t know if I will ever read anything like this. I will never be offered a role like this, ever! A lot of people call you up and say madam clean film hai, clean project hai, clean director hai. I would go like ‘clean? yeh clean kya hai?’ I was like, what does this mean? And some scripts come to you in which women are constantly objectified. I have never wanted to be a part of films like that, so that’s why those films have never come to me.

Nobody has ever thought that I could do something like that. If it was offered I wouldn’t know how to react to something like this. So when I was offered this one, I felt like I don’t think I will ever be offered a role like this. I don’t think there is ever a role written so well balanced while talking about the sexual desire of a girl, plus what it talks about is what she wants in life.

Since you have grown up watching the 1990s movies, would you pick up a role in a mainstream entertainer of that kind?

I don’t know how I would react to it if something like this were offered to me. If they are going to give me shitloads of money and fame, I may take it up because then it would put me in a better position to later choose the roles that I want to do. If it is paving a way for me, why would I say no to it? It’s work.

I am just lucky that Lipstick... has come to me and it has somewhere educated me in more than one way. It has made me think about myself as a woman and what are the conditions I have put myself through to be able to live life till now. For example, my conditioning has been a very conservative one unknowingly, and that has happened with most of us. Whenever I get a period, I use the words I am down. Why? Or how I do not want to talk about it on set or with my male co-actor. It’s so weird and it's just conditioning. And I sit and judge a woman if she has more than one partner.

Is that [social conditioning] also the reason why the CBFC may have been uncomfortable with the film?

I think so. Somewhere they felt threatened about the fact that women will start thinking about it because this film has actually made me think. It made me think about a 60-year-old woman who can have a sexual desire. What do women do at 60? They don’t have sex? I never thought about it and felt like an absolute idiot. I am this liberated woman with liberated thoughts. A Hugh Hefner can openly talk about taking Viagra and having sex at his age, and a 60-year-old woman is not even supposed to talk about it?

How was your experience working with Alankrita Shrivastava?

She was a hard taskmaster. She wouldn’t say yes to a take until she liked it completely. She really pushed us. It was a physically exhausting part for me. All my scenes are in these 2x2 locations. The DoP, the sound guy, Alankrita, me, Vikrant... everybody stuck in this little room. Sometimes I was like I really need to step out for two minutes.

What is good about her is that she never made me feel that I was working with a female director or anything like that. I only felt like I was working with a director who knew her onions. But the thing was also that to get many of these scenes [sexual ones] right, I felt at utmost ease because she was a female director. Maybe I wouldn’t have been that comfortable if it was a male director. I wouldn’t have found the confidence to do something like this because I was doing it for the first time. My crew was amazing.

What does it add to you as an actor when you work with amazing artistes like Ratna Pathak Shah or Konkona Sen Sharma or Amitabh Bachchan?

All my life I have learnt from Naseer sir [Naseeruddin Shah, with whom she does theatre] and Ratna ma’am... the last 12 years of my life. Whatever I know about performance has come from them, and Makrand Deshpande, who has a very different way of working — very fluid. I am doing a play with him and I am on stage with the writer-director of the play [Deshpande] so I can’t screw up. But if I am feeling a certain thing he will let me be. With Naseer sir I have learned that you have to rehearse 100 times to be able to give that kind of performance. With Bachchan saheb again, I never thought a star like him would have time to do rehearsals. I would do 15-20 rehearsals before a scene during Yudh and I was blown away by him.

And Konkona, she is so lovely. She is always in her character, so working around her comes naturally to the rest of us because you can only build on to that. I can always use all their performances as my reference at any point of time.

What is the most interesting reponse you got from someone who saw the film at one of the festivals?

We were in Los Angeles for a festival. I was sitting behind this gentleman while watching the film. And he was just so uncomfortable while watching the scenes. That made me so happy. He kept saying 'our women don't do this'. I was excited to see that the man got uncomfortable. I want men to get uncomfortable in a good way. Not being condescending to them, but it's good. When I watch an item song, I feel uncomfortable and it makes me question if this is really the idea of women in our country or even the world. And if that is, then this should also be there.

There's another instance. In Japan, I watched the film for the first time at the festival. I was also doing a solo trip across Japan before that. I was staying in Kyoto in a hostel. And there were two Japanese women staying there with me. I extended the invitation to see the movie to them. I was going to be in Tokyo to see the movie in two days. Those girls just packed their bags and came to the screening. They had no idea about Hindi cinema. After the movie, they came to me with tears in their eyes and said that their situation in Japan was worse than what was depicted in the movie. And the film just became so alive to me at that moment because I realized that this [gender inequality] is not an India-centric problem but a global problem.