The studio has plans to release a film each month in theatres starting in September.

Music label Saregama India is stepping into filmmaking with Yoodlee Films, aimed at the growing target group of individuals aged 18-30 who are largely exposed to world cinema through digital platforms. Their goal is to produce intriguing content that will tell “socially significant stories”.

Yoodlee Films draws from its core philosophy of ‘fearless filmmaking’ and its films will revolve around tales that are inspired by real-life incidents or have been adapted from world literature. These films are shot on location with sync sound, giving it a realistic feel.

Their plan is to release a film each month in theatres along with distribution partner PVR Pictures. At first, these films will be seen in the larger towns and cities and later be available on digital platforms and TV channels too.

Their current slate includes four films beginning with Brij Mohan Amar Rahe on 1 September. Directed by Nikhil Bhatt, an ad filmmaker who was a creative producer on Mickey Virus (2013), the Hindi film is based on a true story of a man who gets sentenced to death for his own murder. 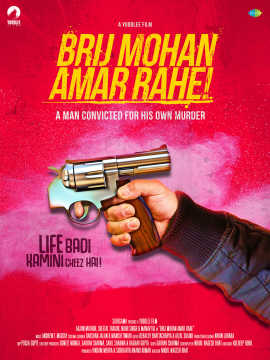 The second film, due to release in Tamil and Malayalam on 25 September, is also inspired from real-life. Abhi & Anu is directed by Tamil cinematographer-turned-filmmaker BR Vijayalakshmi and revolves a young couple, a blogger and an engineer, whose love could get destroyed by a secret.

A third film inspired by true events is the Hindi film, Ajji, directed by Devashish Makhija, in which a 65-year-old grandmother takes revenge for the rape of her nine-year-old granddaughter.

Finally, The Noblemen, an adaptation of William Shakespeare’s play A Merchant of Venice, will be the directorial debut of Vandana Kataria, a production designer on Oye Lucky! Lucky Oye! (2008) and Shanghai (2012). The English film will take place in a boarding school where a 15-year-old is pushed to the brink by a group of bullies.

The press release for the studio says Yoodlee Films wants to make their film a collaborative effort and will offer “a profit sharing of 30% to all key stakeholders (director, key crew members, etc.) of every film, thus ensuring that all parties are equally invested in the success of the project.”

The managing director of Saregama India, Vikram Mehra, said in a statement: With 1,20,000 songs Saregama has the biggest and best music IP in the country. With Yoodlee Films, we plan to extend this leadership to films business, thus positioning us uniquely to take advantage of the digital entertainment economy."

Additionally, the vice-president of films and television, Siddharth Anand Kumar, stated, “We are looking to create a tidal wave of thematic and real cinema for an audience starved of it. And we are doing this with filmmakers who are unafraid of challenging every norm of commercial cinema. We promise fearless filmmakers complete transparency and respect at every stage of the process."

Besides the above films, three more projects are under production and three more are in the scripting stage. These films will also be in regional languages.