If you are talented, you will get a chance: Kartik Aaryan


His monologue in Pyaar Ka Punchnama (2011) made him famous, but behind the success lay years of hard work and failed auditions.

It is easy to like Kartik Aaryan. Smart and jovial, the actor has quickly become one of the more liked personalities in Hindi cinema.

Hailing from a middle-class family in Gwalior, Madhya Pradesh, Aaryan made it big with his performance in Luv Ranjan's cult comedy, Pyaar Ka Punchnama (2011), as the henpecked Rajat. The film launched him into fame, with every young man identifying with his character and every young woman feeling sorry for him.

Since then, the actor has worked for or starred with some big names in Hindi cinema — Subhash Ghai (Kaanchi, 2014), Paresh Rawal (Guest Iin London, 2017). And he is all set to sign a film with Taapsee Pannu and Sonakshi Sinha.

The path was not easy though. Aaryan's famous monologue arrived at the end of a two-year struggle in Mumbai's suburbs, hunting for roles. He said, "I would travel by local train from Belapur to Andheri, or wherever the audtions would happen, 5-6 hours of travel. There were several fake auditions as well. I even got one film which never took off. After two years, I managed to get an advertisement. My first pay cheque was worth Rs2500. For these 2-2.5 years, I kept going to and fro, and was constantly failing in college. I never told my parents about it."

That was not the only thing he kept from his parents. During an informal chat at the Cinestaan.com office, Aaryan revealed that he never told his folks that he wanted to be an actor. "I hail from Gwalior, it is a small town," he said. "Over there, to tell someone I want to be an actor, a hero basically, is difficult. My family is a simple, middle-class family. I decided that I won't tell my parents until I find a footing in the industry. My parents wanted me to become a doctor or an engineer, the typical dreams. So, I decided to move to Mumbai under the pretext of education. Then I could pursue my struggle." 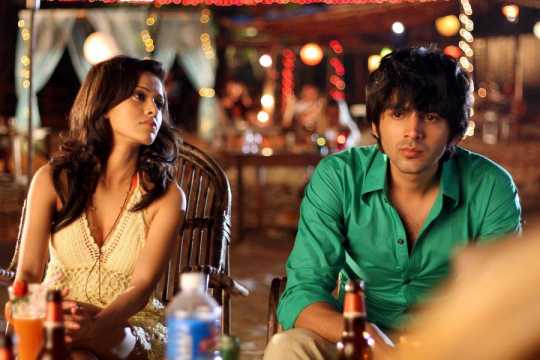 To get auditions, he would often scour social media platforms like Facebook and Twitter for casting calls. It was on one such occasion that he spotted casting director Vicky Sidana looking for actors for a small film, Pyaar Ka Punchnama. The film, made on a budget of Rs70 lakh, went on to earn Rs17 crore at the box office. Aaryan earned particular fame for a five-minute monologue. It also became his calling card in the industry.

At earlier auditions for the film, the actor revealed, he was rejected. It was only an incidental call to the casting director to ask for his portfolio shots from the audition shoot that led to his destined chance.

Aaryan laughed as he recalled, "It was a five-and-a-half-page script for the audition, I thought they have given me the script for a short film! It was the final call, if I cracked this scene, I would be in the film. They gave me a day to prepare, and I sat up the whole night preparing for it. I performed it in front of them, but I fumbled over the second or third page. But by then, people were clapping. That encouraged me. That was the moment which got me the contract."

That was seven years ago, but the actor remembers every line of the monologue. His practice made sure of that. "You know how parents often show off saying 'My child dances so well, or sings so well.' So when the neighbours come in, they are like 'beta, say that monologue quickly. Say it to uncle' (laughs). That's how it is with me."

Pyaar Ka Punchnama was director Luv Ranjan's first film, and was released the same year as Zoya Akhtar's Zindagi Na Milegi Dobara. The reason the small film with no known names caught on was its relatability. Dealing with the pressures of relationships and the struggles of maintaining one, Pyaar Ka Punchnama became a sleeper hit. Aaryan said, "I think the right combination of writing and directing, and the background score, which was subtle, made the monologue special. To make such a sequence again becomes difficult because it is a combo-effect. It is not just me doing the monologue. The reactions to it are just as important."

The film also marked the beginning of a friendship between Aaryan and Luv Ranjan. The duo are currently working on their fourth film together, Sonu Ke Titu Ki Sweety. The actor was quite profuse in his praise for the director, calling himself 'lucky' to have found a director who shares his 'frequency'. "I can't understand how one man can acquire so much knowledge," he said. "Not that he is very old, but he is so wise. You can talk about anything with him, and he will have an answer to it. He is a genius!"

Be that as it may, the actor has done quite well for himself. In an age of star kids and internet sensations, he has become one of the more recognized faces in the industry. As the likeable boy next door burdened with an unwanted guest in Guest Iin London, he has now performed with his idol, Paresh Rawal.

"He [Paresh Rawal] is one of the finest actors we have," he said. "He is someone who, apart from being an amazing actor, is an amazing human being. He is very funny, timepass. Chilling with him is like chilling with my younger brother. He is very young at heart."

Guest Iin London was the actor's third comedy film. Despite this, he says he likes dramatic scenes more. "I like making people cry more than making them laugh," he said. Asked if he worried that he would get stereotyped as a comedian, Aaryan said, "I don't think the audience thinks from that perspective as much as we in the industry think about it." He said, however, that actors should look to explore new things. A fan of Shah Rukh Khan's performances in Darr (1993) and Baazigar (1993), he said, "I look for different things in stories that I like, but not because I want to change my image."

Strangely, for all his love of dramatic films Kartik does not like horror films. Asked if he had watched co-star Kriti Kharbanda's earlier work in Raaz Reboot (2016), he sheepishly admitted, "I never watch a horror film by myself. If I watch a horror film, then I sleep with my lights on." It seems safe to say we won't be seeing him in a horror film anytime soon.

However, in the age of microscopic attention spans and the pressures of stardom, actors seldom have the opportunity to test out different characters before they are relegated to obscurity. The threat is greater for an 'outsider' with few connections in the industry. Aaryan, however, disagreed with the 'nepotism' debate, saying only the skilful survive. "The industry today is welcoming," he said. "Chances are available. Lots of outsiders are finding breakthroughs, just as much as insiders. If you have to talk about it, star kids are only those who deserve and have the potential."

In fact, he even sympathized a little with the 'star kids' saying he shares a great relationship with several of them from the new generation. "I also think they have the challenge of having to fill some 'big shoes'," he said. "It is quite a burden. You can't deny the pressure on them. I don't have that pressure. When I interact with them, I can feel that. You are judged in everything you do, every day. I get sympathy as an outsider, so that is an advantage sometimes."

So, which of the new generation actresses would he love to act with? Pat comes the reply, "Alia Bhatt. I think she is amazing and the film choices she has made are commendable."

What about Kharbanda, his co-star in Guest Iin London? "She is amazing, sometimes when you are acting with someone for the first time, and are thrown into a romantic scene, it becomes awkward. She [Kriti] is a very spontaneous and jovial person... If you improvise on a scene, she will do the same. I share a great rapport with her."

After Guest Iin London, the actor returns to shooting with a familiar face, Nushrat Bharucha, in Luv Ranjan's next, Sonu Ke Titu Ki Sweety. "Even she might be bored of my praise," he said. However, praise her he did. "People had started to hate her that she played such an irritating girlfriend in Pyaar Ka Punchnama. It is a commendable thing that you play a character that appears so real that people take it to be your real self. It is her acting that earned me all the pity." he laughed.

However, he remained tightlipped about the film itself. All he said was that it has the 'feel of Punchnama with a little more in it' and suggested that we watch the announcement video. He was not lying. The video features Kartik Aaryan, Nushrat Bharucha and Sunny Singh as the famous trio argue among themselves. It certainly has the feels of Pyaar Ka Punchnama.

Before the fleet-footed actor could slide out of office, we asked how he unwinds. "I love playing on the PlayStation," he laughed. As for his favourite sports team, it's Leo Messi's Barcelona.