Revisiting Babul: When Dilip Kumar was caught between Nargis and Munawar Sultana

A love triangle, SU Sunny’s Babul (1950) was one of the first films to create Dilip Kumar’s image as the ill-fated lover, caught between the affections of two women. Although the film seems like a simple love story of a village postmaster Ashok (Dilip Kumar), who wins the hearts of two diametrically opposite women played by Nargis and Munawar Sultana, the film is an exploration of deeper issues.

Ashok gets a job as a postmaster in a village and meets Bela (Nargis), the innocent and spirited daughter of the former postmaster.

Bela is enamoured by Ashok and interprets his fondness for her as love. Usha (Munawar Sultana) is the daughter of a wealthy landowner. She lives in a lavish mansion and drives a car. Although the relationship between Ashok and Usha has a rocky start, they share common interests and eventually fall in love. But Bela believes Ashok is in love with her and will marry her, and asks Usha to relinquish her love for him. However, things do not go as planned and Ashok finds himself caught between the affections of the two women.

Caught in the middle

Dilip Kumar plays a Renaissance man -— he is well-educated (with a BA degree), sings, plays the piano and harmonium, paints, writes poetry, reads, and smokes contemplatively. He delivers a fine performance as a charming man and balances his performance as he shifts his gestures in signifying his affection for Bela and his love for Usha. The two women symbolize tradition and modernity, though, notably, neither is painted in a negative light. They also embody class difference as Bela belongs to a poor family while Usha is a zamindar’s daughter.

It is in fact Bela’s innocence that leads to her misreading Ashok’s intentions. Out of generosity, Ashok promises Bela’s father that he will assist him in bearing the oft-repeated 'beti ka bojh' (the burden of a daughter) and even buys her jewellery for her marriage with this intention. But Bela sees it as an indication of his love and her joy and expectation know no bounds.

In the end though, Bela realizes that her desire is unreciprocated, but she also realizes that the class difference between her and Ashok cannot be bridged. In a scene where she tells Usha that she was wrong in interpreting Ashok’s feelings for her, she says, “Chand akash hi ke liye paida hua hai, dharti ke liye nahin [The moon's place is in the sky, not on earth]."

All three characters are caught in circumstances and no one is to blame for the predicament that they find themselves in. The most complex character is that of Munawar Sultana, who seems haughty and brattish in the beginning but gains our sympathy for her brave decision. In fact, even Bela describes Usha as a stone-hearted woman, but this seems to be just jealousy as Usha graciously agrees to step aside in the face of Bela’s claims on Ashok, sacrificing her own feelings.

Babul marks the acting debut of the first comedienne of Hindi cinema, Tun Tun, who would have turned 94 today (she was born on 11 July 1923). 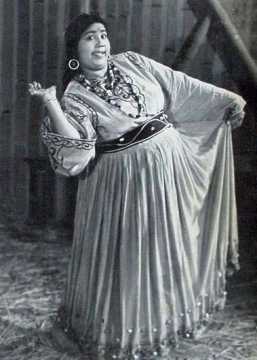 Credited as Uma Devi, her screen name in the film, Tun Tun, was coined by Dilip Kumar, who wanted to give her a funny name to suit her personality!

The story goes that Uma Devi came to Bombay to become a singer and met the legendary music director Naushad. On meeting him, she threatened to fling herself into the sea if not allowed at least an audition! He auditioned her and she went on to sing several hits composed by him, including her biggest hit, 'Afsana Likh Rahi Hoon' in Dard (1947).

Here's what you don't know about the legendary Tun Tun

But the film that marked the height of her singing career, Chandralekha (1948), also became her undoing. Her working on the SS Vasan extravaganza violated her contract with AR Kardar and the aftermath of her decision saw the drying up of singing offers for her. This, along with the rise of Lata Mangeshkar, sealed her fate as a singer till the opportunity of being a comedienne presented itself.

Tun Tun has just a few scenes in Babul but is quite effective in them as she uses her portly presence and incessant laughter to great effect, providing easy comic relief. Employing the oft-used trope of parents worrying about the marriage of their daughter, Tun Tun’s parents try to find a suitable (or any, in this case) match for her.

Tun Tun is seen exercising diligently as her mother urges the father to find a man for her daughter who is delicate as a flower! There is a hilarious meeting between her and Dilip Kumar where she is meeting him as a prospective suitor and invites him to arm wrestle with him! She then chases him around the cot only for both of them to collapse on it and break it!

The sets and lighting of Babul were highly appreciated and one can note the influences of German expressionism in the lighting by ace cinematographer Fali Mistry.

In a review in Filmindia, the film was celebrated for its 'maddeningly beautiful photography'. The review showered high praise for Mistry saying, '[Fali Mistry…] has turned the camera into a painter’s brush and made every frame a canvas of art and beauty.'

While praising the film for its technical mastery and haunting melodies, the review reserved its harshest criticism for the worn-out plot, a 'common boy-meets-girl story', saying: 'The cheap, common and oft-repeated story of Babul has made a technically great motion picture look almost worthless.'

But the film was a huge hit and its memorable melodies remain popular even today. 'Chod Babul Ka Ghar' became a mandatory song to be played at weddings when the bride leaves her home.

Babul has 15 songs in all, most of them contemplating the hues and effects of love. The memorable duet, 'Miltey Hi Ankhein', by Shamshad Begum and Talat Mahmood has an anecdote related to Naushad. Apparently, during the recording of this song, singer Talat Mahmood lit a cigarette in the presence of Naushad. This earned the displeasure of the composer and he never chose Talat Mahmood to sing his compositions ever again, a charge Naushad denied vigorously in his interviews!