The two actresses are sharing screen after a gap of seven years.

The first poster of Aamhi Doghe is out and it gives positive vibes about the Marathi film. Director Pratima Joshi’s debut made a splash when it was announced earlier this year as it would reunite two of the most prominent Marathi actresses — Priya Bapat and Mukta Barve — after a gap of eight years.

The first poster is a simple, yet attractive image of Bapat and Barve having gola (flavoured ice candy) on a beach in Mumbai. The bright blue gola cart and colourful bottles are juxtaposed against the pleasant shades of the sunset and sand.

While the makers have kept the story under wraps, Joshi has said in the official statement, “Aamhi Doghi is about the relationships of today’s women. Relations like mother-daughter, father-daughter and boyfriend-girlfriend are tackled in the film. It says that one should not be restricted to his or her own point of view and also give equal importance to others’ views. The story revolves around this ideology and it will be relatable to every young girl. It will help the young audience to think sensitively.”

The last time Bapat and Barve acted together was in director Deepak Balraj Vij’s Aaika Dajiba (2010). 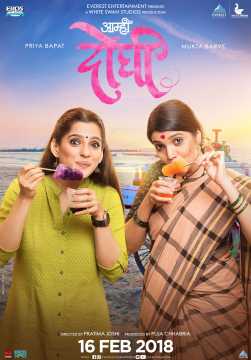