The industry needs to wake up to the worth of a good writer: Richa Chadha


In an exclusive interview, the Fukrey Returns actress speaks of her rapport with her co-stars, the character Choocha's strange obsession, and the lack of powerful heroines in Hindi cinema.

It's a relaxed sunny afternoon, but Richa Chadha is a busy woman. The actress is having one of those long interview-filled days when Cinestaan.com decides to catch up with her.

Sitting down in the living room of her cosy apartment in Versova, Chadha looks at ease despite the hectic schedule. "This is why I prefer to do things at home, where I can be chilled and relaxed," she says.

The actress is set to reprise her role as the Delhi gangster Bholi Punjaban in the ensemble caper Fukrey Returns. The film, which will be released on 8 December, is a sequel to Fukrey (2013), which has gained quite a cult following among youngsters who identify with the four lost heroes trying to fix their rundown lives with a little 'jugaad'.

Filled with comedy, sharp wit, and some creative ideas, the sequel brings together a cast of Ali Fazal, Manjot Singh, Pulkit Samrat, Varun Sharma, and Chadha herself.

"It is a very strange space to be in, but I love hanging out with these guys and having fun with them," says Chadha. The chemistry on screen is a result of the bonding off screen, she says. From making fun of people to cracking silly jokes, Chadha reveals she has become part of the gang.

Rapport is an aspect that certainly helps when it comes to performing in a comedy. Chadda adds, "It [rapport] is very important. At least in a comedy, because comedy is a function of comfort. You don't crack jokes in front of strangers unless it is a standup comedy routine. I love working on this film because we are all such great friends now. We have no boundaries. We make fun of each other, and even the worst things." 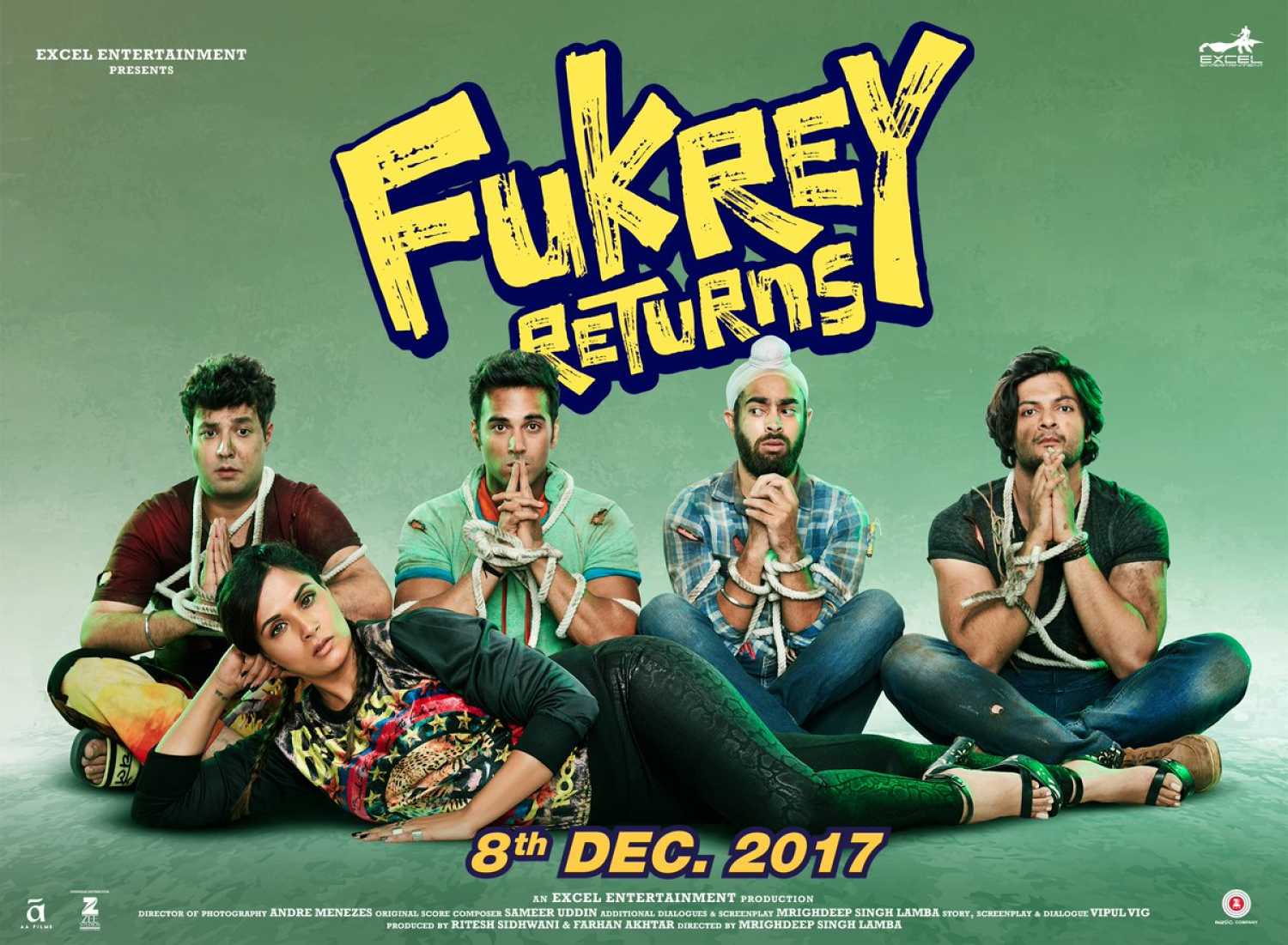 The funniest gag though is part of the film. The relationship between the goofy Choocha (Varun Sharma) and Bholi (Chadha) has been a popular gag explored through the trailers of the film. Chadha laughs at the suggestion, saying it is beyond her understanding. "I don't know why he is in love with her. By the way, he [Sharma] has moved into my building. And he moved in the day I moved in. So I really don't know if god is trying to put us together."

The film has Mrighdeep Singh Lamba returning to the director's chair. Lamba had chosen not to work on any other project since delivering Fukrey. This dedication has earned him some serious loyalty from the cast, and Chadha's love. "I love him," she says unabashedly. "He is immensely patient, because he didn't work on anything between Fukrey and Fukrey Returns. He could have moved on to doing a huge film with an A-list star. But he chose not to do anything because he could not connect with any other script. He was not sort of desperate to jump back into the saddle. I really respect that."

In an industry that produces close to 500 films a year, sequels have become a trend. However, the record of their performances on the box-office has been mixed, to be kind. However, Chadha has faith in Fukrey Returns. "I do believe it will be a box-office success," she says. "We [the cast] have all grown in our careers. The film has grown in people's memories.

But comedy is not the only thing on Richa Chadha's mind. Having made her mark with films like Oye Lucky! Lucky Oye! (2008), Gangs Of Wasseypur (2012), and Masaan (2015), she is set to continue her love affair with powerful characters. With films like Love Sonia and Daas Dev, she is returning to her habit of playing characters that leave a mark on audiences.

"I think I have been lucky with well-written parts," she says by way of explanation. "Sure every actor will bring something special. The industry needs to wake up to the worth of a good writer. When there is a good writer and a strong, distinct characterization, the character becomes beautiful. No matter what it is."

So does she interact with writers on the set? "Not really," Chadha answers. "But I have questions. For instance, I did this film Love Sonia, where I had to play a prostitute. When it comes to playing the character, the accent is very important for me. I have worked on accents for every film I have done. Even for small parts like [in] a Ram-leela [Goliyon Ki Rasleela Ram-leela, 2013], or a Gangs... the Bhojpuri-Bihari accent, or Masaan. Bholi has to sound like she is from Delhi."

Accents may be an important part of her preparation, but does switching from serious to comic roles and back take a toll on her emotionally? "Sometimes it is very difficult," Chadha muses. "I usually take a break. I take a vacation out of India where I am not recognized. When the last Fukrey was released, I went to Goa. It was awful (laughs) because I was spotted and recognized everywhere. That is no fun."

In a rare moment of clarity about the perils of her occupation, she says, "What you are trying to escape comes and imprisons you."

The actress also has Sudhir Mishra's Daas Dev scheduled to be released next year. She plays Paro to Rahul Bhatt in this modern adaptation of Sarat Chandra Chatterjee's 19th century Bengali novel, Devdas. "It is iconic, but it is a very modern adaptation of Devdas. The guy is a fool. It is not a Paro that is burning a diya, singing in silence, and sobbing into the pillow," she warns us beforehand.

As for Mishra, Chadha says, "I would recommend for every actor, if they get a chance, to work with a filmmaker like Sudhir Mishra. He is an institution to this industry. People like Anurag [Kashyap], Imtiaz [Ali] have been his ADs [assistant directors]. He himself has learnt from Kundan Shah, Shekhar Kapur, and Mahesh Bhatt."

Speaking about her experience working on the film, Chadha says she learnt a great deal through the schedule. "He has such interesting characterizations. As an example, everybody knows the story of Devdas. Throughout the film you barely see me in a lot of makeup. But there is a scene where Paro is finally leaving Dev. On the day of the shoot, Sudhir asked them to put some red lipstick on me. That was bizarre! It was a scene in which she is distraught. Any other director would have made her look eyes swollen, mascara running, tears, but he wanted me in make-up. I asked him why is she suddenly needing to look pretty? He said, 'Woh dishevelment me na beauty honi chahiye. Bande ko lage ki ladki chhod ke jaa rahi hai.' [There should be beauty in the dishevelment. The guy should realize the girl is leaving him.] That was genius!"

Despite 2017 being hailed as a year of fantastic female performances, Chadha believes the industry lacks the genuine presence of a female superstar. "Unfortunately, I am also an actor. But even in the commercial space, we had a Sridevi who could be Charlie Chaplin in the same film and really sensuous 10 minutes into the film. Madhuri [Dixit], Sridevi, Rekha, Rani Mukerji," she rattles off names, "they were women who could carry a film on their shoulders. They were women to reckon with, who took a stand."