In a major embarrassment, a leading English television news channel committed a typographical blunder and announced the demise of Congress MP Shashi Tharoor instead of veteran actor Shashi Kapoor. Kapoor, aged 79, died this evening in a Mumbai hospital.

The news channel had spoken to filmmaker Madhur Bhandarkar who paid tribute to the actor. But the channel posted the following tweet at 6:16 pm, wrongly mentioning Tharoor instead of Kapoor. 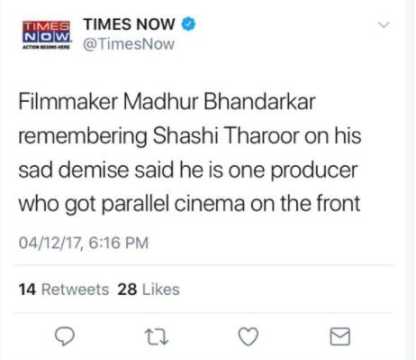 The error soon drew flak on social media even as Tharoor’s office began receiving condolence messages. Tharoor, however, did not lose his cool and made light of the typographical error.

We're getting condolence calls in the office! Reports of my demise are, if not exaggerated, at least premature. @TimesNow #ShashiKapoor https://t.co/nbtZGcdQTa

The channel was quick to rectify its mistake and issued an apology to the Congress leader.

Tharoor, on his part, was eloquent in his praise for the veteran actor, saying a part of him was gone too, referring to the rhyming names.

I feel a part of me is gone. A great actor, smart, cosmopolitan, impossibly handsome & w/a name that was often confused w/mine. (My office got two calls from journalists today about my reportedly serious ill-health!) I will miss #ShashiKapoor. Condolences2his family&all his fans pic.twitter.com/fSz3jafPZJ