80 years of Snow White And The Seven Dwarfs: From folly to fortune maker


The film was premiered at the Carthay Circle Theater in Hollywood on 21 December 1937. We look at the impact of the classic on animation and beyond.

Walt Disney, creator of arguably the world’s most famous animated character Mickey Mouse, is largely regarded as a champion of animation in cinema. His film, Snow White And The Seven Dwarfs (1937), the first full-length animated feature film ever produced, is a milestone in American animation and certainly set the standard for all animated films that followed.

The late American film critic Roger Ebert wrote of Disney and his masterpiece: “The word genius is easily used and has been cheapened, but when it is used to describe Walt Disney, reflects that he conceived of this film, in all of its length, revolutionary style and invention, when there was no other like it — and that to one degree or another, every animated feature made since owes it something.”

In the 1920s, animated shorts and newsreels were normally shown before the main film as a precursor. Disney’s creation Mickey Mouse became popular after the short Steamboat Willie (1928), one of the first shorts with sound. As did other animated characters like Felix the Cat and Betty Boop. But a full-length feature had not been attempted as yet.

The animator-turned-filmmaker was inspired to do the "impossible" after watching a silent film on the Brothers Grimm fairy tales in 1917. By the mid-1930s, the cost of short films was rising steadily and double features began to take the place of the shorts before films. It took Disney nearly three years and a crew of over 500 — animators, layout artists, inkers, painters and many more talented artists — to make the 83-minute Technicolor feature film.

Disney put all his money in the film, even mortgaging his house, and it shows in the extraordinary detail displayed in the film. For the first time, each frame of the animated feature was filled with detail — vibrant characters, props, backgrounds took up every inch of the cel.

The film expanded the use of the ‘multiplane camera’ technique which Disney Studios had previously used in the shorts. The camera allowed the director and animators extra control over the depth and realism of their scenery in the film. Before the advent of computers in animation, this was go-to technique for backgrounds.

The animators also pushed themselves to the limit to showcase what could be done and shown in a feature film. Each character in the film, whether it had a speaking part or not, is given equal importance. From the dwarf Dopey to the little birds and animals Snow White meets in the forest, all had a part to play in the film.

Snow White and her prince do not have the cartoonized design of previous shorts; they are relatable and incredibly human. Further, the crew put in the hours to get the movement and action right — studying zoo animals, going back to art school on the lot to understand gravity and physics, even watching and copying actors acting out the sequences in front of them.

All of these methods are employed today, albeit on a grander scale. For example, Pixar sent the production team of Up (2009) on a research visit to Venezuela’s Angela Falls, to replicate the fictional Paradise Falls of South America for the film. Though the technology has vastly changed, today’s animators still act out their assigned scenes as reference.

After its premiere at the 1,500-seat Carthay Circle Theater in Hollywood on 21 December 1937, Hollywood columnist Louella Parsons wrote in The Los Angeles Examiner, “One thing I do know is that this picture is the best Christmas present the children of Hollywood could possibly have.”

RKO Radio Pictures, the distributors, made sure to amp up the promotions before the premiere — 1,000 billboards featuring the film’s posters were put up in and around the city of Los Angeles. The star-studded premiere was attended by the crème de la crème of Hollywood from Shirley Temple, Marlene Dietrich, Charlie Chaplin and Ed Sullivan to Clark Gable, Judy Garland, Jack Benny, Cary Grant and many others.

Disney and his team of artists, who were worried about the film’s reception, had no reason to fear. The audience walked out of the theatre crying, moved by the emotion displayed in the film’s ending. Snow White And The Seven Dwarfs opened across the United States on 4 February 1938.

A year later, in February 1939, Disney was presented a special Academy award (one normal statue with seven smaller statuettes to represent each of the dwarves) for the film by child star Shirley Temple. The citation read: “To Walt Disney for 'Snow White And The Seven Dwarfs' recognized as a significant screen innovation which has charmed millions and pioneered a great new entertainment field for the motion picture cartoon."

Surprisingly, German dictator Adolf Hitler was one of the film’s famous fans. Russian filmmaker Sergei Eisentein, who had made the landmark Battleship Potemkin in 1925, complimented the animated feature, calling it “the greatest film ever made”.

The popularity of the beloved animated classic meant that it was released another eight times over the next five decades. What began with ‘Disney’s Folly’, the name given to the financially burdened production by the trade, has today emerged as one of the world's largest conglomerates. Just last week, the company that Walt built was in the news again as it bought over 21st Century Fox for a rumoured $52.4 billion.

Such was the success of the film that Disney Studios in Burbank, California, was made from its profits. Made on a budget of $1.75 million (though originally budgeted at $250,000), the film grossed around $8.5 million the first time it was released. It was later overtaken by another Hollywood classic, Gone With The Wind (1939).

Today, it sits at number ten on BoxOfficeMojo.com’s list of highest US all-time box office (adjusted for inflation) ahead of such films as Avatar (2009), Star Wars: The Empire Strikes Back (1980) and Ben-Hur (1959). Since Snow White And The Seven Dwarfs was released 80 years ago, animation has become a force to be reckoned with at the box office.

Snow White And The Seven Dwarfs may have launched the Golden Age of Animation, but it also gave rise to the animation industry. Now, it is a global enterprise, with smaller studios in unlikely locations in China, Spain and, yes, even India. However, the major players are still American and European; the Japanese stalwart Studio Ghibli temporarily shut down in 2014.

Animation as a whole has grown exponentially, especially for television and digital streaming platforms. No less than 40 films are currently under production or in development in studios across America. It is not surprising when animated movies feature regularly in the top ten at box offices in the US and across the world. Ironically, the number one film of 2017 is a live-action retelling of the 1991 Oscar-nominated animated hit, Beauty And The Beast.

For the studio heads, it’s an easy decision. Illumination Entertainment’s Despicable Me 3 (2017) has already earned $1 billion at the global box office this year. A little over 100 films were made in 2017, ranging from the traditional 2D animation to the more lucrative CG (computer-generated) animation which is shown in 3D in multiplexes. 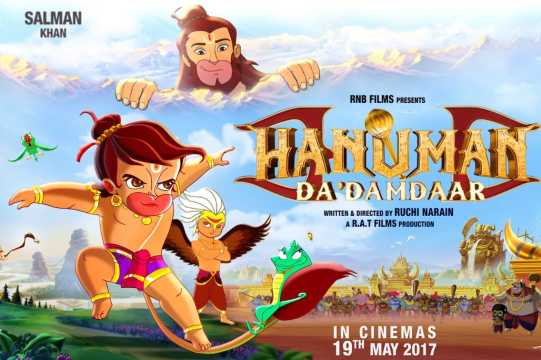 India had a single release with Hanuman Da Damdaar, which featured the voice of superstar Salman Khan as Hanuman. The talent of Indian artists is frequently seen in various Hollywood productions, particularly large-budget blockbusters, and DreamWorks Animation had opened an Indian unit in Bangalore, but since it was acquired by Universal Pictures, the studio's fortunes have changed and the unit has been closed down.

One thing is for sure. Indian animation has a long, long way to go before it can compete on the global stage.