Flowers from Holland, Rumi's poetry and 45 days of work — things you want to know about Virat-Anushka's wedding


Post the wedding, details have emerged about the work that has gone into making the biggest wedding of the year.

The wedding might be over, but the buzz about it continues on the world of the internet. One of the major questions surrounding the massive hype of actress Anushka Sharma and Virat Kohli's wedding is managing the secrecy of the entire operation. Wedding designer Devika Narain, of Devika Narain and Company, was in charge of the task. Post the wedding, several details have emerged on what went into creating one of the biggest weddings of the year.

In a Facebook post on her company's profile, Narain wrote: 'It's finally all settling in, the cold is seeping back in and at this point I'm an odd mix of relief and immense excitement. We've been keeping a secret for a couple of months now and all of it has come to life today, in a beautiful Tuscan village, where Virat Kohli and Anushka Sharma officially got married (sic).'

While the buzz about the wedding has been building for over a year, Narain's involvement in the process began after the couple's wedding planners, Shaadisquad, approached her to arrange the wedding. Speaking about it in Quint.com, Narain said, "Anushka, chose us because she wanted a very intimate wedding. She was very clear that this was a celebration for her family and that she had no one to show off to, or impress."

The wedding took place on 11 December at the Borgo Finocchietto heritage hotel in the 800-year old village in Tuscany. The location was one of the most closely guarded secrets of the entire operation. The venue was chosen for its quiet homely feel in addition for its secluded location. The choice of the villa in Tuscany prevented any major media presence, considering the high profile nature of the two celebrities. 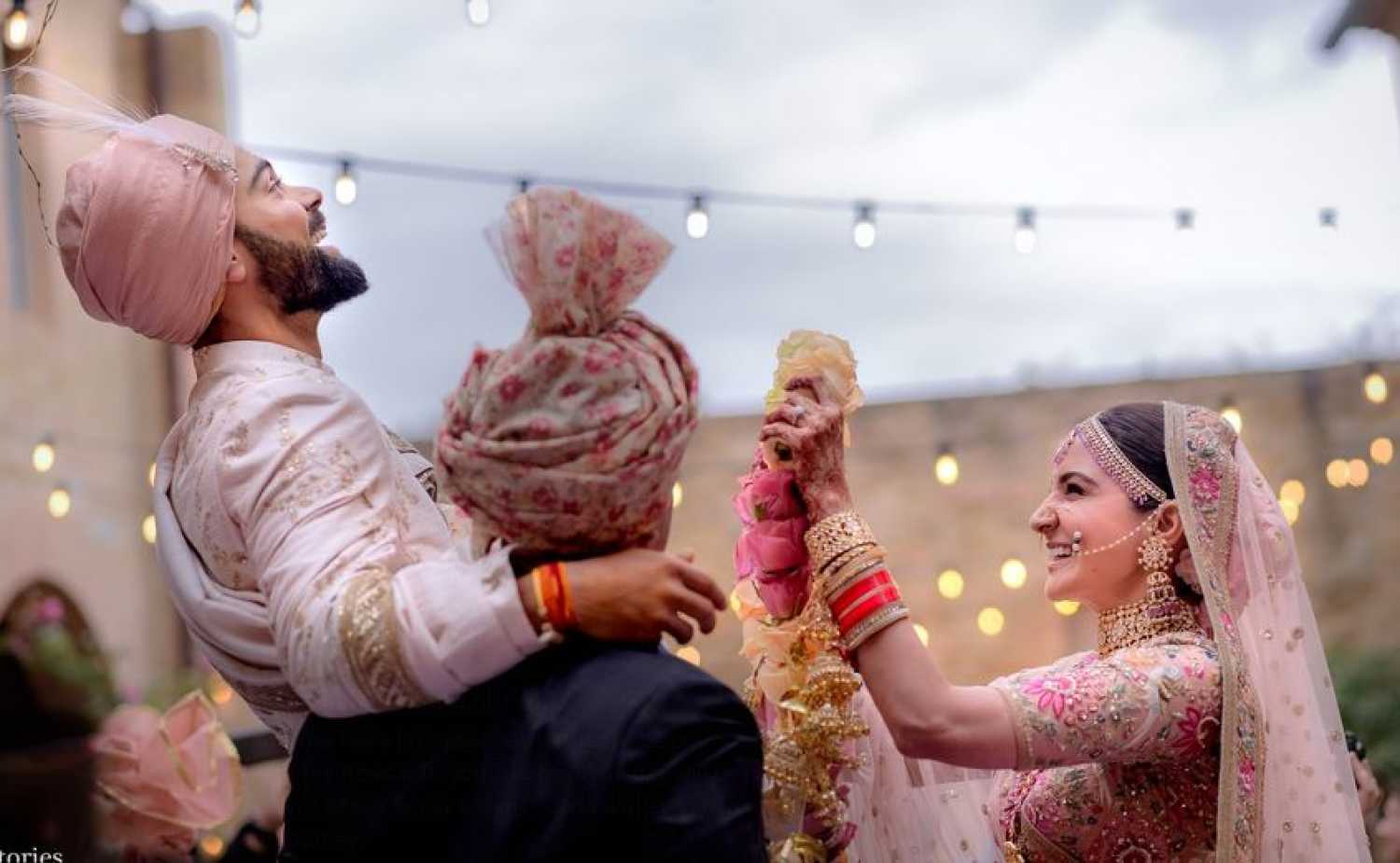 The villa was previously famous for hosting the Obamas during their vacation in Italy. Located at a four-hour drive from Milan, the venue offered the couple an exclusive location, as well as scenic settings.

While it was a superstar wedding, the origins of the theme were very spiritual. The few selected guests at the wedding were gifted an anthology of poems by the Sufi poet, Rumi, a favourite of the couple.

The guests apart, the wedding saw some stunning fashion on display by the couple. Designed by Sabyasachi Mukherjee, the wedding couture of the two revolved around the theme of a 'pink' wedding. From Anushka's lavish bridal couture to her velvet sari for the reception, it seemed to be the dominant colour. As designer Sabyasachi Mukherjee revealed in his Instagram post, 'hot pink is her favourite colour'.

From the fuchsia boho attire that she wore for her mehendi to the signature burgundy velvet sari that Sharma wore for her reception, Mukherjee was in charge of creating unique designs that set the mark at the wedding of the year. The pick of the lot was the pale pink lehenga that the Phillauri (2017) actress wore for the ceremony. Sharma paired it with stunning earrings from the Sabyasachi Heritage Jewellery Collection. The earrings were reportedly crafted in 22k gold studded with Iranian turquoise, uncut diamonds.

But it was not all Sharma apparently. Kohli, the captain of the Indian cricket team, was just as fashionable throughout the event. He wore a raw ivory silk sherwani for the special event with a hand embroidered Benarasi pattern, as well as a rose silk turban to add that distinct touch.

The prices might seem outrageous, but the dreamy pictures of the wedding justify them.

However, this was not the only challenge. Keeping the event a secret was another major challenge. Narain's team spent 45 days working round the clock to create the perfect wedding. Reports suggest that the designer made several secret trips to the location through the year, before it was finalised and preparations began. Among the elements involved were the flowers, which were imported all the way from Holland to Tuscany.

In her interview to Quint, Narain revealed Sharma to be an 'involved' bride. That aspect is certainly obvious from the choice of the song for Sharma's entry to the jaimala ceremony. Videos shared online reveal that the actress chose the song 'Din Shagna Da' from her home production, Phillauri (2017), as she walked down the aisle.

The couple is now expected to return to India, where they will hold a reception in New Delhi on 21 December, followed by another in Mumbai. For now though, the internet seems besotted with the dream wedding of the year.