The Konkani director speaks about the lead characters of his acclaimed film, why he dislikes closeups, and the Sexy Durga controversy. 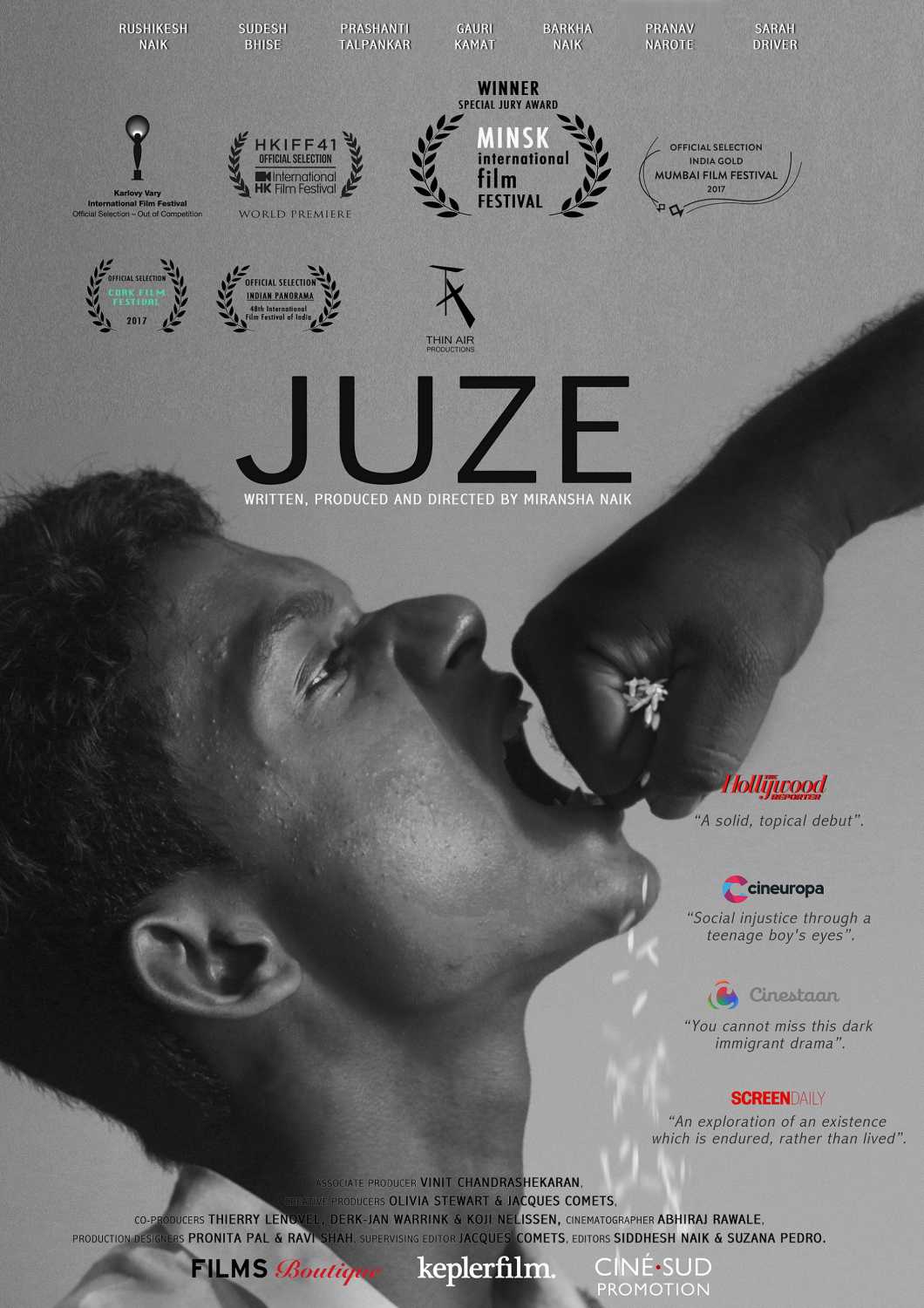 Juze is the story of Santosh, a poor orphan who is abused and exploited with an iron fist by the brute property owner Juze. Santosh is good at his studies and has to take drastic steps to free himself from the shackles of Juze.

Cinestaan.com caught up with Naik, the soft-spoken director of Juze, who has been enjoying the good run of his film in the festival circuit. Wearing a fitted blue shirt, Naik settled down for a chat in a tiny, makeshift office during IFFI 2017. The twinkle in his eyes and number 4 in his bracelet and ring are hard to miss. “I was born on the 4th of April. So I like that number,” he said when we asked about his belief in numerology.

Naik completed a course in screen-writing at the Whistling Woods International Institute in Mumbai. He made short films Shezari (2012) and Ram (2014), which paved the way for his feature film debut with Juze. The chap from Quepem in south Goa attended the screening of Juze at IFFI 2017 with his full cast and crew who also hail from Goa. Excerpts from the interview:

The film is about Santosh [Rushikesh Naik]. Why did you call it Juze and not Santosh?

We have seen a lot of Juzes in many Goan villages. Is this story inspired by real life?

Yes! You see a Juze in every small village wherever you go. It takes something serious to take that image down. This was one of the common experiences that I observed in my surroundings.

You have taken care to show authentic Goan village life — women talking outside their homes, fathers dropping their kids to school on a cycle, boys loafing around... how does it feel bringing your film to your people after travelling all over the world with it?

In the film, the scene of women talking has been edited. Initially it started with the poder [bread man] coming and women chatting after they pick up their bread. Maybe it’s not so common anymore, but that’s how it used to be in Goa. When you travel the world, some nuances get lost in translation. For local Goans, there was a personal touch as they could relate to what was happening in the film. As a filmmaker, you have to incorporate all those details. Otherwise what’s there for the audience?

It’s good to see an elderly woman abusing in the film. I remember grandmothers being strict about not using cuss words. Again, was it done to bring that touch of authentic Goan life?

Of course. It is one of the things I tried to show in my film. Very few read my script. When the actors and other Goans were reading the script, they told me that the Konkani which you have used for dialogues isn’t how you write it. And I said, ‘Did you question Munna Bhai [MBBS (2003)] when it was made in that rowdy Hindi?’ You know, the way they talk among themselves, they use dialects of Marathi, Hindi. There is a disconnect when you are depicting reality, and the moment it goes on screen, people start talking in drama or film language. For me, I was projecting reality. The people I observed spoke in this language, and that’s why it made it to Juze.

In Goa, filmmaking has not been a traditional career choice. Where did your filmi keeda come from?

I always had interest in filmmaking. Though I enjoy all kinds of cinema, I had a special place for arthouse cinema from the beginning. I have loved movies like Mausam (1975), Masoom (1983) and Saudagar (1991). As kids we used to watch cinema in somebody’s house who had a VCR or whenever Mausam or Saudagar were shown on DD [the national broadcaster Doordarshan]. We used to get to watch one film every Friday. Those films stayed with me, I enjoyed them. I remember I always had a place for them.

I continued watching 'Bollywood' films, as parallel cinema was missing, then that drew me to world cinema. Once I was introduced to world cinema, my interest in filmmaking grew tremendously. I started watching films with subtitles. Then film school happened.

Did IFFI have a role to play in your introduction to world cinema?

I started way before that. As I said, IFFI being so big is the right place for cinema. They get these world films to you. But again, it’s only for 8-10 days. Now I have a red access card, so I can go in anywhere. But otherwise it becomes very difficult to watch each and every film. It’s important that we find another way of watching films.

Who are your influences in the cinema world?

I love Federico Fellini, but there are some movies that I don’t like at all. I’m a big fan of Fellini’s La Strada (1954) and The Nights Of Cabiria (1957). I keep watching them again and again. La Dolce Vita (1960) was such a big hit. But I could not connect much to that film. For me, it depends from film to film, not the filmmaker.

Does watching your favourite movies influence how you tell your own stories?

It broadens your mind, to begin with. There are different kinds of filmmakers. Some people get influenced, but others don’t. Directors have a certain way of doing their job, making a movie. I just go with what I feel. A simple example is, I don’t like close-ups. For me close-ups are a bit surreal. I like to keep a little distance and bring in more of the ambience. It gives me the feel of reality. I don’t think I have so far used any close-ups in my films. That’s not my style.

Don’t you think close-ups give you more of a sense of intimacy with the character?

I think that’s subjective. You can be at a distance and still get into a character’s head, heart, everywhere.

You address the issue of exploitation of immigrants at the hands of Goans. Did you ever feel they might take offence that they were being shown in bad light?

I hope Goans see it as the reality. If I had shown anything that is not true, then I would have been two-faced. I think everyone knows that if you are a ghati [a term used to refer to immigrants in Goa], you are treated badly. Not everyone is like that though. If you see Seby [a character in Juze], he never treats another person low. There are some people who behave very badly with immigrants. I don’t think I have said anything that is not true or is exaggerated. These scenes come from my personal observation of things that have happened in my village. I hope nobody complains.

What is your take on Sanal Sasidharan’s S Durga, Ravi Jadhav’s Nude and Pakistani film Saawan being dropped from the IFFI schedule?

I haven’t seen Nude or Saawan. But I have watched S Durga and if you see the film, there is nothing to get offended by. In fact, the people who are complaining for putting ‘sexy’ before Durga should be ashamed. What the filmmaker is trying to show is if a lady is alone on the street at night, she is not safe.

I feel everyone should try and promote this film and keep the name Sexy Durga. People should try to just see the point. On one side, you are worshipping Durga, and on the other a woman is not safe and this is how you treat a woman. There is definitely something wrong here. When a film like that gets dropped, it doesn’t make sense to me. The film got the censor board certificate. This shouldn’t have happened.

Your characters bring your script alive. Tell us more about Rushikesh Naik who plays Santosh, and Sudesh Bhise who plays Juze.

Sudesh has acted in my short films, Shezari (2012) and Ram (2014). Rushikesh was the lead in Ram. When I first met Rushikesh and saw his photos, I knew he has inborn acting talent. He has the potential of becoming a very good actor, he is already one actually.

Sudesh is a businessman, not an actor. But he always had this passion. He is very dedicated. If you see him in the film as Juze, he doesn’t have to do much. He has the face, the body language and the presence. I so badly wanted him in the film.

He was supposed to do a small role before, and when I was discussing with the team, no one was sure. Rushikesh is such a good performer, so for Juze we needed to be sure Sudesh could do it. He had a lot of screen time. We all were not sure if he would be able to deliver. I told him I would need to do a lot of workshops, rehearsals with him. He already had it in him and just needed a push. And I couldn’t imagine anyone else in Juze’s role.

How long did it take to write, shoot and do the post-production?

The script was written during my filmmaking course at Whistling Woods. It was part of my assignments, like a diploma film. We had to write one feature-length script.

Didn’t you want to make it then? Or did they just want a script?

We were from the screen-writing department. I pitched it to some people and everybody liked the script. But it was in Konkani and a lot of people showed interest, but there was no commitment. Then I started making short films and became confident of my direction. I decided to just go ahead with Juze. For pre-production, we ended up spending a lot of time raising funds. When we finally took the call to make the film, we had just two months to put everything in place. We managed because we had a lot of things already in place.

What are your plans to release Juze theatrically?

I am working to get a censor board certificate for Juze. Once I have it, I am planning a release in Goa.

What about neighbouring states like Maharashtra and Karnataka that have a substantial Konkani-speaking population?

I had a few meetings for other markets, but I don’t know how it will pan out. It’s not easy to distribute a Konkani film, unless I have someone coming on board to help me with distribution. But I think I can handle Goa on my own.