On the singer’s 88th birth anniversary, choreographer and director Vijay Ganguly recounts a few quirky tales he had heard from his father, Anil Ganguly, about Kishore Kumar.

Vijay Ganguly, son of filmmaker Anil Ganguly, grew up on and around film sets. He cherishes many of those memories, particularly the anecdotes relating to actor-singer Kishore Kumar. He first saw Kishore Kumar at the recording of a song from Pyar Ke Kabil (1987).

Like most children of his age, Vijay was in awe of the legendary singer and had grown up listening to his melodies. He remembered being seated across from where Kishore Kumar was recording ‘Tere Jaisa Mukhda Toh’.

“That’s a vivid memory of the singer," he said. "He had come in a lungi for the recording. He was unkempt and had a stubble and just walked in.” At the time, the singer made fun of the song's lyrics, written by Indivar.

“He used to always keep fooling around, joking around. There was never a dull moment. And he was flawless, he used to sing the [entire song] in one shot,” he said adding that Kishore Kumar made everyone around him laugh, from the recordist to the music composer, his nephew Bappi Lahiri. 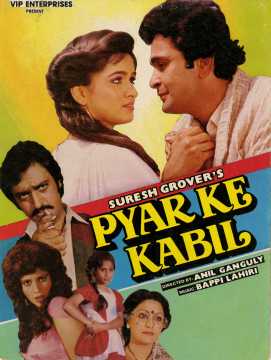 Vijay had heard that Kishore Kumar was quite practical when it came to his fees. “Pehle paise milenge toh gaana gaunga [I will only sing after I get the payment], he was like that. That’s what I’ve heard. There used to be a cup in the recording studio and when he used to come in and if he saw that the saucer was under the cup, it meant the money had been paid. If the saucer was on top of the cup, the fees had not been paid.” Depending on the sign, he would either sing or walk away from the recording.

Kishore Kumar had a soft spot for Anil Ganguly and sang a song in each of his films. When Anil Ganguly produced his first film, he asked Kishore Kumar to sign for its album and paid him his fees in cash. “He [Kishore Kumar] returned a big chunk of the money back. 'Teri pehli picture hai [This is your first film], this is for you. Good luck!' That was a memorable moment for Dad, because he [Kishore Kumar] never did that for anybody,” Vijay said.

Anil Ganguly and Kishore Kumar's acquaintance and friendship went back a long way. As a young man who had run away from his home in Kolkata, Anil had waited outside Ashok Kumar's [Kishore Kumar's elder brother's] house looking for an opportunity to join the Hindi film industry. Kishore and Anil, with the same surname — the actor-singer's real name being Abhas Kumar Ganguly — shared a close bond.

Anil Ganguly worked as chief assistant director on Half Ticket (1962), which was helmed by Kalidas. On one of the shooting days, Kishore Kumar, who was starring in the film, did not show up on the sets. The production team called up at his house, but there was no answer. The shooting was cancelled and, obviously, everybody was upset.

The next day, the director arrived on the sets at 7 am only to find Kishore Kumar sitting on a chair outside the locked studio premises. Kalidas went up to him and asked, "You came early?" To which Kumar replied, "I couldn’t come yesterday because of a problem so I came early today."

The reason why he couldn’t make it? According to Kishore Kumar, a cow was blocking his way on the road. He got off his car and whispered in the animal's ear, ‘Kalidas ki shooting hai, bahut nuksan hoga, chalo nikalo [I need to go shoot for Kalidas or he will suffer huge losses. You need to move away]’. The cow didn’t budge and Kishore Kumar apparently had to turn around and return home.

When Anil Ganguly recounted these tales to his children, they would laugh heartily at the legend's almost neurotic stories.