Though not as big as older brother Salman, Arbaaz Khan has certainly made his mark as an actor.

The second of three sons of screenwriter Salim Khan. Arbaaz Khan has often had to live under the shadow of older brother and superstar Salman Khan.

The Khans are a close-knit family and Arbaaz will be the first to acknowledge the stardom of Salman Khan. But that does not mean Arbaaz Khan hasn’t made his mark as an actor.

Arbaaz Khan has achieved what neither Salman Khan nor younger brother Sohail Khan could do — an award in his maiden film. Arbaaz made a promising start to his acting career with a few hits, and, as a matter of fact, looked the better actor than Salman Khan in those days. Luck did not favour him, nor did he do films by the dozen, and he eventually had to settle for fewer lead and supporting roles. Yet, even in those he made an impression.

As the actor-filmmaker turns 50 today (4 August), we look back at five defining roles of his career.

Eight years after Salman Khan stepped into Hindi cinema, it was the turn of younger brother Arbaaz Khan to make his debut. Unlike Bhaijaan, as Salman Khan is known among friends and relatives, Arbaaz Khan chose to make his debut with a negative role in Abbas-Mustan's Daraar, which was inspired by the Julia Roberts-starrer Sleeping With The Enemy (1991). Arbaaz looked menacing and it was a gamble that paid off. He played Vikram, a possessive wife-beater. Though it was just a film, Arbaaz had this maniacal look about him that sent shivers down the spine. He picked up the Filmfare award for Best Villain that year. Sadly, that remains his finest performance.

After starting his career as a villain, Arbaaz Khan played the protagonist in the next few films. Perhaps he had committed to these films earlier, or he didn’t want to be tagged a villain. Pyaar Kiya To Darna Kya was a Khan family film in which Arbaaz played the older brother of Kajol, who played the love interest of Salman, while younger brother Sohail was the director. While not a negative role, Arbaaz Khan’s character was that of an overprotective brother who calls the shots in the family. Suraj (Salman) and Vishal (Arbaaz) shared a sweet relationship in the film, Vishal always quick to anger and Suraj using his humour to calm him down. Despite his overbearing nature, Vishal was still a likeable and responsible character.

At first you might wonder where in this Imran Khan-Genelia D’Souza debut film was Arbaaz Khan. But jog your memory and you might recall the comic cameos of Arbaaz and Sohail Khan as Bhalu and Bagheera, respectively. Their names were weird, and so was their conduct. The rich Rajput brothers had this insane obsession for experiencing life in a lockup. While in Mumbai, they travel on horseback even to a disco, behave indecently with women, brag about their riches, splurge money, all just to get arrested. Their early attempts yield no results, but slapping a constable at the police station sees their wish fulfilled. Albeit unruly, Bhalu and Bagheera’s insane humour was one of the film's highlights. It might well have been Sohail Khan’s best performance, but it remains one of Arbaaz’s underrated roles.

Madhur Bhandarkar has made a career out of exposing the underbellies of different professions. How much of it is true may be subject to debate, but in the Bhandarkar world greed overrides personal relationships. Arbaaz Khan found himself playing the opportunistic fashion tycoon Abhijit Sarin in Fashion. All that matter to Sarin are name, fame, and money. He doesn't want to compromise on any of these, even at the cost of personal loss. Sarin ends his affair with supermodel Meghna (Priyanka Chopra) after the latter spills the beans to his wife. Sarin was an opportunist, a soulless character, and Arbaaz Khan played the part to a nicety. Chopra walked away with most of the kudos, but Arbaaz Khan, like the other supporting cast, did an admirable job. 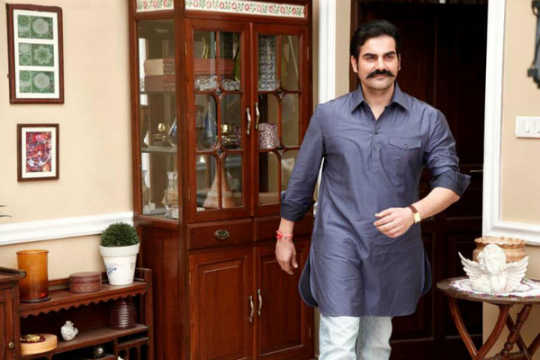 With big brother Salman Khan in the lead, nailing it in his desi Robin Hood avatar, Arbaaz Khan had no choice but to play second fiddle. Makkhanchand Pandey, teased by all, including brother Chulbul, as Makhhi, has big dreams but lacks the acumen. He is too innocent for his own good, and his attempts to impress his love or father often end in embarrassment. You might get angry but you also empathize with Makkhi. Arbaaz displayed the requisite innocence to the T. Dabangg may have been all about Salman Khan, but without Makkhi the film would have been incomplete.