I am happy just thinking that things will work: Bobby Deol


At the moment, Bobby is in a very 'happy phase' and is not afraid of failures.

Bobby Deol became an overnight star with his debut film Barsaat in 1995, but his stardom faded gradually with Bollywood placing its bets on a new crop of actors and experimenting with different stories. The actor says everyone goes through ups and downs, and that he doesn't want to spend his time thinking about the past.

At the moment, Bobby is in a very "happy phase" and is not afraid of failures. He says his fans still want to see him on the silver screen and so he is eager to move forward on a positive note. 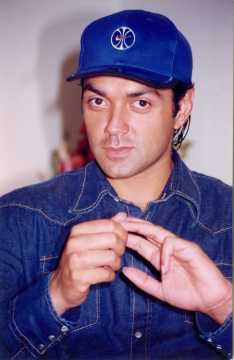 "After my last film, I was just not interested in subjects that were offered to me. I didn't want to pick anything, and my last film didn't do well. So, I was just waiting for something nice to come my way. I was trying to work on myself, improve myself and reinvent myself," Bobby told IANS news agency in a candid chat over the phone from Mumbai.

"Reinventing is just a term used in our industry. It is basically getting oneself in the right frame of mind and being positive and then just trying to move forward," he added.

After the failure of Yamla Pagla Deewana 2, Bobby had a guest appearance in Singh Saab the Great in 2013.

The mention of his break from the silver screen makes Bobby reflect on how he fought his battles.

"Between this, I went through a phase where I was totally disappointed, low in life with nothing going my way. I fought those battles and came out of it. I don't look back at all that negativity and the low phase of my life. I am happy just thinking that things will work.

"I have Poster Boys and I am doing Yamla Pagla Deewana Phir Se. So, things are moving forward and one has to be positive," he added.

Bobby will be back on the big screen after almost four years with Poster Boys, scheduled to be released on 8 September.

Poster Boys, which also stars Sunny Deol and Shreyas Talpade, is a story of three men who are shocked to find their photos being used as part of a vasectomy campaign. The film is produced by Sony Pictures Networks Productions, Sunny Sounds Pvt Ltd, actor Talpade Shreyas his wife Deepti Talpade.

The actor said: "I know that people still love me and still want to see me in movies. It requires me to move forward. You never know which is the right movie. You just have to look for the subject and work."

After a successful debut, the son of veteran actor Dharmendra experimented with his craft, and picked varied projects — from love stories to thrillers to hard core action films.

His fast-fading career got a new lease of life after hitting the jackpot with Yamla Pagla Deewana in 2011. But he couldn't continue the successful streak, courtesy films like Thank You and Players.

The father of two said setbacks make one stronger.

"I cannot be philosophical about it or anything. I am just saying that everybody goes through ups and downs. You have to be brave enough to face them and fight it... No one around you can help you unless you help yourself. That makes you stronger."

The Apne actor also said that he wished he was "more positive and more focused in my life earlier" than he is at present.

"I wish I was like that but I can't change that. I don't want to cry about how I was and how I should I have been."

At the moment, he wants to work in good movies.

"I want to work every day of my life. My ambition in life is to always keep moving and for that you really have to work hard and look after yourself."

"I am in a very happy phase in my life in my mind. Even if I have failures when I work, it won't push me back like it used to earlier, because I just want to move forward and my ambition in life is to just keep moving forward," Bobby concluded.