On the 20th anniversary of the director's death (27 August 1997), we take a look at three of his films that define his unique take on family and relationships.

One of the most famous trilogies in Indian cinema, perhaps the most famous one, is Satyajit Ray's Pather Panchali. The trilogy by Ray focuses on a young boy's journey through the city of Kolkata. Ray's masterpieces offered audiences a view into the individual's mind and life, through the lens of the city around them. In the 1970s, another group of Bengalis sought to bring to the urban audiences a new genre of cinema.

Between them, Hrishikesh Mukherjee, Basu Bhattacharya, and Basu Chatterjee are often credited with creating a new middle ground of cinema. Of these, Basu Bhattacharya stands out for his nuanced take on the struggles of married couples in urban settings.

Beginning his career as an assistant director to Bimal Roy on Madhumati (1958) and Sujata (1960), Bhattacharya soon progressed to direction with Teesri Kasam (1966). Produced by the lyricist Shailendra, the film was a beautiful take on unrequited love between a simpleton and a village dancer. With Raj Kapoor and Waheeda Rehman playing the main characters, Bhattacharya managed to create a wonderful portrait of the rustic life.

Yet, the director soon further progressed to more urban settings in his next films. Of these, three stand out for their common theme, treatment and subjects. While the films did not win any awards, their portrayal of the life of urban couples and their struggles in a still conservative, but changing India touched the chord of a emerging generation in the 1970s.

The first of these was Anubhav (1971). Starring Sanjeev Kumar and Tanuja, the film revolved around the life of a couple struggling to find their own space in a fast closing world. The entry of a third person from the wife's past (played by Dinesh Thakur) sends the whole thing into a tizzy, leading it to a climax. A wonderful little film, it is better known for one of Geeta Dutt's wonderful song, 'Meri Jaan Mujhe Jaan Na Kaho'.

While the first film surprised the audience, the second one surprised the critics. In Aavishkar (1974), Bhattacharya cast the leading stars of the day, Rajesh Khanna and Sharmila Tagore, in roles that lacked any star appeal. In the film, Khanna and Tagore played a rebellious couple who marry each other, despite family opposition. A few years later, they struggle to cope with the flaws and insecurities of their own selves, aggravated further by their spouse's ignorance.

The film was a rare choice for both Khanna and Tagore, as it did not portray them as couples in love, but rather one caught in the illusion of love. Khanna, in particular, won a Filmfare Award for Best Actor in 1975 for his portrayal of an insecure, arrogant, and obsessed husband.

Despite the story's delicate setting, Bhattacharya, as was his wont, ends it with the sight of the couple sitting down for a talk about their weaknesses. It was a rare departure from the overtly romantic portrayal that was in trend.

While these two films focussed on discord within a marriage, the third part of Bhattacharya's trilogy, Grih Pravesh (1979), spoke of the attraction of an extra-marital relation. Except, the director plays out the attraction as a subtle game. Sanjeev Kumar's character struggles between letting go of his wife, or even acquiring the attention of the 'other woman'. 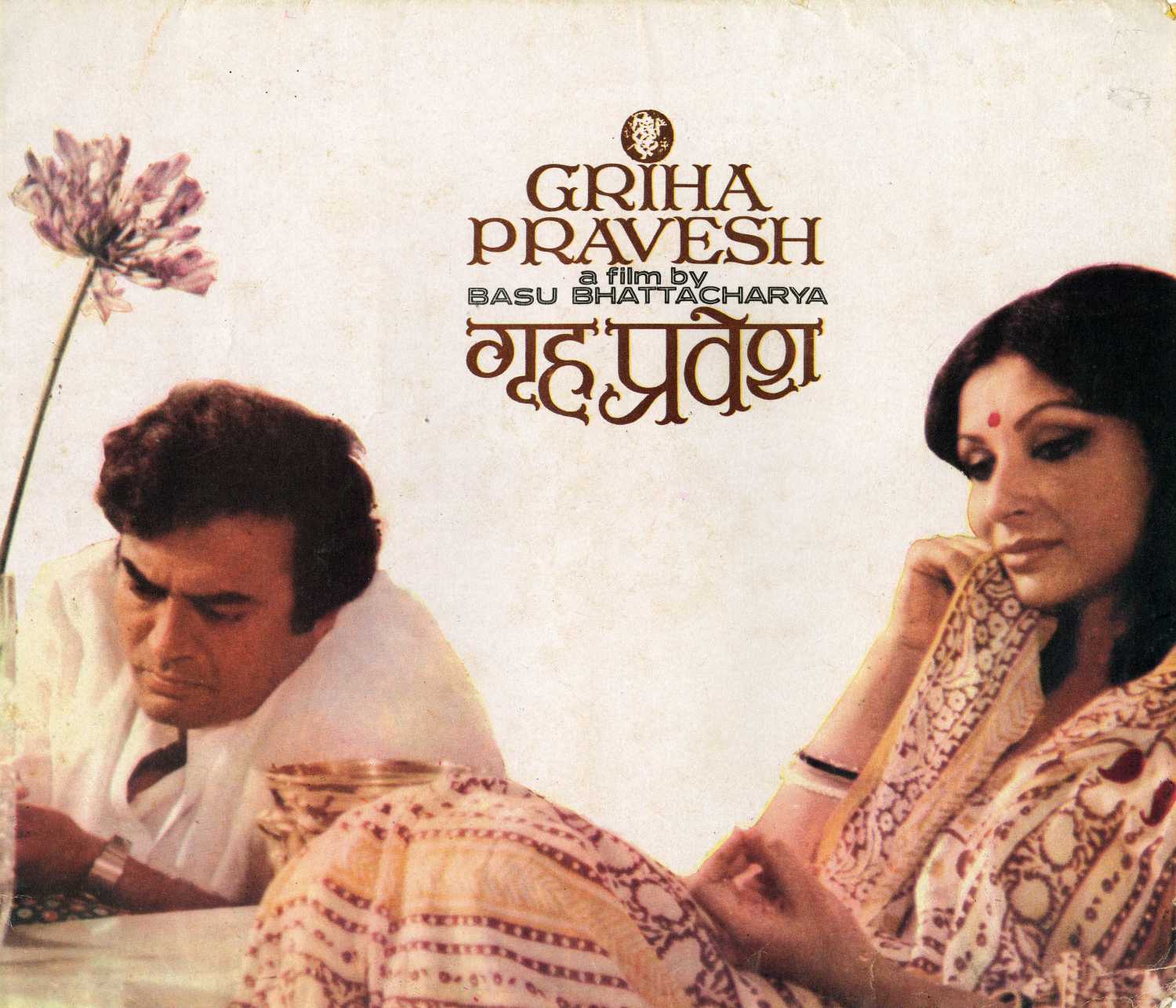 Even the women themselves are not portrayed by Bhattacharya as entirely manipulative, or innocent. When the marriage is on the rocks, it is the wife who takes on the responsibility to draw the line for her husband and deliver the final order.

The film also has a rare moment of lyricist Gulzar making an onscreen appearance at a friendly party with the couple present. If nothing, that makes the film a wonderful anecdote for cinephiles.

This decade was an age of evolution for Hindi cinema. On one side were the multi-starrer blockbusters from Manmohan Desai, while a world of independent cinema was beginning to burst forth with Shyam Benegal and Govind Nihalani leading the pack. It was in the middle ground that Basu Bhattacharya, Hrishikesh Mukherjee, and Basu Chatterjee found themselves.

While Hrishikesh Mukherjee turned to comedy as a means to poke fun at society around him, Bhattacharya took recourse to stark dramatic portrayals of couples struggling to hold their little world together.