Darshan Kumar on his first full-blown commercial entertainer, A Gentleman


After playing earthy characters in Mary Kom (2014), NH10 (2015) and Sarbjit (2016), Darshan Kumar enters blockbuster territory with Raj Nidimoru and Krishna DK's A Gentleman. The actor speaks about the transition from theatre to films, and the high-octane action sequences with Sidharth Malhotra.

Since making his breakthrough as the supportive Onler Kom who egged his wife on to become a champion boxer in Mary Kom (2014), Darshan Kumar has achieved the recognition that every actor in the industry craves. In Anushka Sharma's debut production NH10 (2015), he played the violent male chauvinist Satbir who murders his own sister for the sake of his 'honour'. The diverse choice of characters, and their starkly realistic portrayals, are byproducts of Darshan Kumar's long years of stage training under veteran Naseeruddin Shah on Motley Productions and in Neena Gupta's Sahej theatre group.

In an exclusive interview with Cinestaan.com, Darshan Kumar spoke about the journey from a young, gawking college boy cast in Tere Naam (2003) to filming one-take action sequences with Hollywood stunt directors. Excerpts:

To start with, A Gentleman is a very different film from Mary Kom or NH10. It is an out-and-out commercial action film. How was the experience?

We also had a lot of rehearsals for the action scenes, which are quite brilliant in the film. Each and every action sequence in the film, I had a great time doing them.

It's the first time I am doing a full-fledged action and commercial film. It was a different kind of enthusiasm for the project.

This film also has a lot of high octane action sequences, which are different from the realistic fights of NH10? How was the prep?

Well, for the last 5-6 years, I have been learning kick-boxing and martial arts. For the first time, I got a chance to use it in this film. There is one scene that our choreographer, Cyril, asked 'Can we try this in one take?' It was 12 moves in one take! He was so confident about me doing it, and we did it!

I had a great time doing action. It is also a very different kind of role I am playing. Most of the films which I have done, Mary Kom (2014), Sarbjit (2016), even NH10 (2015), were in a realistic zone. In this, I have used my imagination as an actor. We usually do this while doing theatre, imagination comes into the picture.

I play Yakub in the film, who is very intelligent, sharp and daring. He just loves his job, whatever he does. 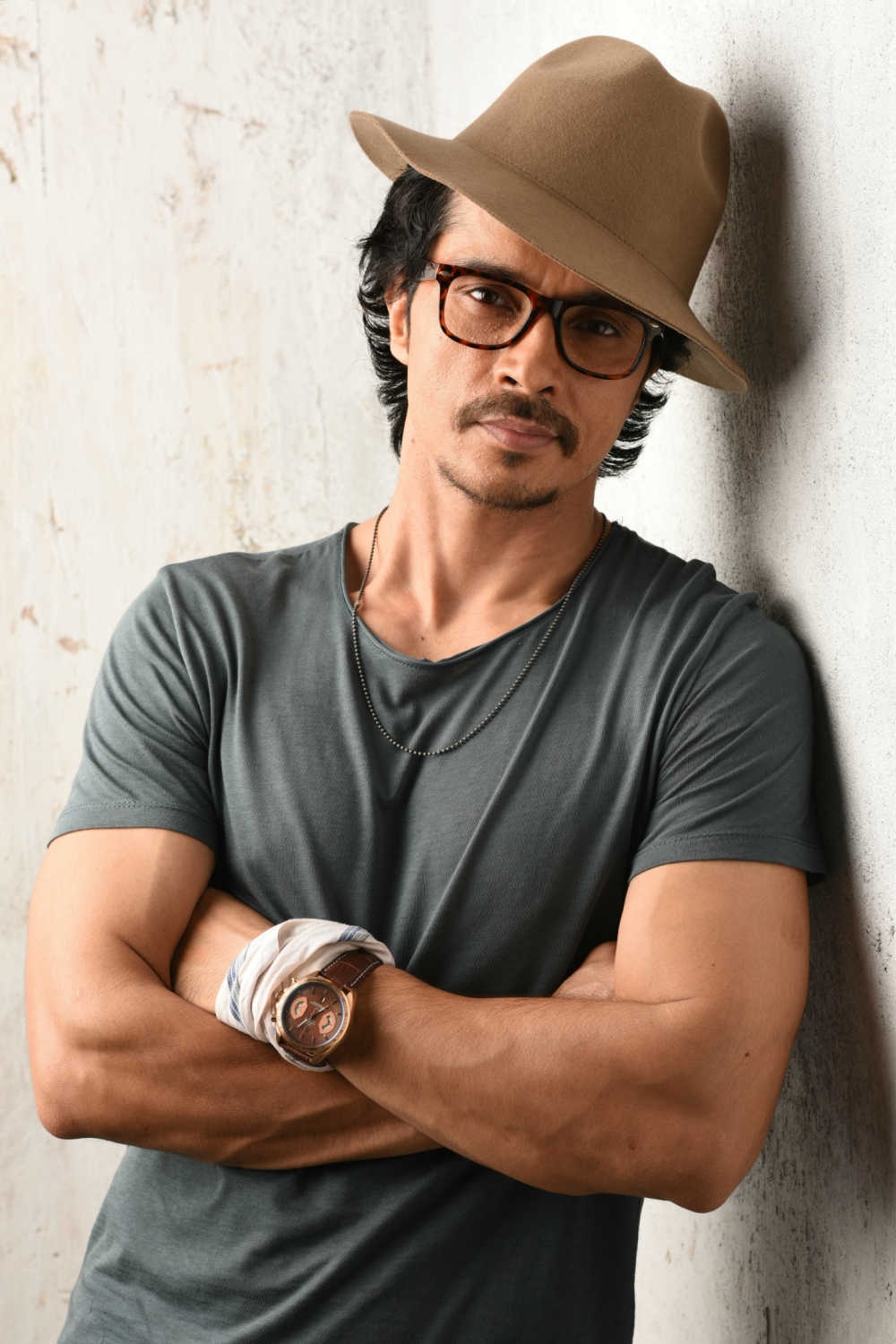 Must have been a nice change going from the realistic zone to a complete no-holds barred commercial film?

Yeah, but see as an actor, you have to work hard for both the films. When we are doing biopics, you know you have to stay close to the characters' real persona. Everyone knows about that. You work on their walk, talk, and why they think in a certain way.

In commercial films, we also have to work hard because we have to portray a character which we haven't seen. We have to imagine that. How will he walk? How does he talk? What would his body language be like?

We have to work hard for both films, but it gives a different kind of feeling each time.

How was your chemistry with the two leads of the film, Sidharth Malhotra and Jacqueline Fernandez?

It was amazing. Sid is a 'yaaron ka yaar' kind of guy. We became very good friends on the set, pushing each other to do a better shot each time. We would talk about acting, films, and food. If you become friends, it becomes easy, as an actor, to focus on the film. He doesn't come with a baggage. He is calm. As the film says, he is a 'sundar, susheel' guy. The words are perfect for him.

Jacqueline has a very different energy. She is bubbly all the time, spreading positive energy. It was nice when she was around.

While success has only been recent, you have been working in theatre for a long time with Sahej and Motley Productions. How has the transition from the stage to camera gone for you?

Stage is a one-take act. You have to be there. We often say 'Aap stage pe nange hote ho' (You are naked on stage). You are completely open to everything.

In films, you have the liberty to choose. This portion, you have to play with the emotion, or the face, or just action. You have to be knowledgable about the camera, lighting, close-ups. But you have to be very real in your performance. If you are not, the camera catches you very quickly. Every emotion, even if you blink, is caught.

On stage, when you are performing, people are noticing little things like you fidgeting with your finger, or a habitual thing.

I guess theatre helped me in that way. That's why I got a lot of compliments from my directors, DK and Raj. When we finished the shoot, Raj and DK paid me a compliment by saying, 'You should be in Hollywood'. They loved my work in that way.

Thanks to theatre, I guess. There I got a chance I to work on myself. Even if I give the best performance, there is a chance to better it the next time. Even while performing, there are surprises that make you think 'Why didn't I think of this before?"

It's like net practice, while films are like hitting a sixer off a bouncer in the real match.

A Gentleman directors Raj-DK: We don't have a special interest in double role films

Nowadays, the story is the hero of the film. Audience has changed. They want something different. I try to read a few stories every day. That's how I get the idea of scripts as well. I see the entire picture of the film.

When I read a script for the first time, I read as an audience. I visualise how it would look when it is shot. That helps me a lot. I see the entire scenario, the director, the production house which matters a lot these days, before going in for the project.

Your choices in roles, with the exception of A Gentleman, have been quite realistic. What are you looking at next?

Right now, I have two scripts of two different genres. There is one film which needs a lead actor. Talks are on, so I guess we will finalise something soon.

They are different films, one is a thriller, the other is a bit suspense. So, I guess we will find out soon.

Although you have just come into prominence, there has been a long journey behind it. You actually made your first appearance in Tere Naam (2003)?

It was just a guest appearance. I was in theatre that time, and Satish Kaushik saw my performance and asked me if I would like to be a part of the film. It was a fun thing for me, because back then I was studying and working in theatre.

Was that the moment the acting bug bit you?

Well, I guess the 'chaska' for acting was there right from my childhood. Actually, my dad wanted to become an actor. One of the best production houses finalised him as a lead, but the family did not support him and he could not come to Mumbai.

Right from my childhood, I used to write poems, and perform in school plays. I won several prizes as well, which encouraged me. It was then I joined NK Sharma's group in Delhi. While doing theatre, I got this film.

Yet, after 2003, there is a long gap. Did you ever fear that you won't break through into films?

That fear comes even today sometimes. But my father supported me in a big way. My cousins, my sisters kept pressurising me that 'You are only doing theatre, not earning at all. Do you think there is a future?' I was sure of making a living, but when every call is about this, you start thinking the other way.

I called up my dad telling him I will move to Australia, stay there, work, and try theatre there. Dad asked me 'You want to go to Australia, and still do theatre? Why do you leave from here then?' I told him I had to think about the future as well. He told me 'As long as I am around, you don't have to worry about that'. That's how I survived.

What is the major challenge facing actors trying to break into the industry?

The biggest challenge is to get what you want to do. It's not easy to give auditions after auditions.

Firstly, it takes many years to understand the industry. Secondly, it takes more years to get a good role. Then, even if you get it, you have to establish yourself with consistent performances. Once Anurag Kashyap told me "If a star son is launched, he needs only one film, but an outsider coming in would need 5-6 films to come into that level."

It's true that you have to show your performance again and again. Bang on the door saying 'I am there'.

Star sons have the advantage of a big family being present, and as soon as they come in they naturally fit into the family. But yeah, they have to have talent to sustain.

But for us, we have to start from the scratch. Sometimes, you don't know where the auditions are happening. You search for that, and you get shortlisted but are not called. Then you keep doing something or the other. It takes years before you get the kind of role you want to do.

That's what happened to me as well. Before Mary Kom, thanks to Naseer Sir (Naseeruddin Shah) I was getting a chance to show my skill in theatre and in plays. I would often get an offer from many directors. But I waited for the right opportunity.

It happens, but you need to have patience.

So, which do you prefer? The stage or the camera?

I would always love to do both. Right now, I am preparing for another play. I love that. My mentor, Naseer Sir, is doing the same thing. Theatre and cinema, and he is balancing them both. I think I will do the same.