How Madhur Bhandarkar made Trishakti before making films on 'stree-shakti': Birthday special


On the filmmaker's 49th birthday, we take a look at some lesser known aspects of his career.

Madhur Bhandarkar is synonymous with woman-centric films. He might be the only current Hindi filmmaker to have made as many as eight films in which the central character is not male. Even his recent film on the Emergency, Indu Sarkar, had a female protagonist.

Woman-centric films have come to the fore in Hindi cinema about five years ago. But Bhandarkar has been doing such films when nobody was ready to risk them. He started off with the iconic Chandni Bar (2001). Based on the life of a young woman forced by circumstances to become a bar dancer, the film and the performance of its lead artiste, Tabu, was well received. Plus, the film won as many as four National awards.

However, not many may remember Bhandarkar's work before Chandni Bar. On his 49th birthday (26 August), let’s look at some less known aspect of his career.

Chandni Bar was actually Bhandarkar's second film. He made his directorial debut with Trishakti (1999). It was an action thriller starring three male leads, Arshad Warsi, Sharad Kapoor and Milind Gunaji. They played best friends who wish to live a carefree life. Unfortunately, they face severe financial crisis. This lures them to join the underworld. A cop Dayal (Sadashiv Amrapurkar) also has an important part to play in the turn of events. 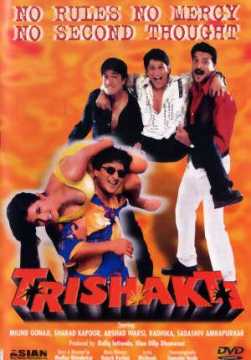 Simply put, Trishakti is a B-grade film. The 1990s saw a number of wannabe action and gangster films with mindless fights, invincible heroes and weird-looking baddies. This is exactly what Trishakti was. Needless to say, it is impossible to believe today that Bhandarkar made this film.

For example, during his entry scene, Warsi is made to look super cool with words that go in the background, ‘Come on baby, won’t you be my girl. I say, hey hey hey!’

There are some other gems in the form of the following dialogues, which do not bear translation:

The biggest shock here is the regressive portrayal of women. It’s shocking not because of what is shown but because it is so far removed from what Bhandarkar has been doing from his second film onwards. For instance, Warsi gives a lift to a random girl and after covering some distance, he stops the car and kisses her. To which the girl has no objections.

This is not all. Radhika, who played the female lead, is shown to be a dumb witted woman. For example, a thief snatches her purse. Warsi gets hold of the thief but lets him go as he is mesmerized by the woman's beauty. And guess what? The woman doesn’t even raise an eyebrow. She is also someone who doesn’t feel angry when she comes to know that Warsi's character had taken her for a ride. The film also has a derogatory take on homosexuals.

But there is one instance that suggests the presence of modern-day Bhandarkar. During a scene, the words, ‘Vote for BJP’, are inscribed in bold letters on a wall along with the party’s lotus symbol.

Coming back to Trishakti, this was the only film of all the projects directed by Bhandarkar that he did not himself write. So, we can conclude that once Bhandarkar took the pen in his hand, he came out of Trishakti and started making films on 'stree-shakti' (woman power).