Of the director's 14 Hindi films, six revolved around female protagonists. On his 16th death anniversary today, we analyze four of them.

Regular production of woman-centric films is a fairly recent trend in Hindi cinema. In fact, much as it is the need of the hour, there are still a few factions in society that do not approve of 'lady-oriented' films.

One would have expected the state of affairs about half a century ago to be more regressive. However, the picture seems a bit different. While Hindi cinema in the 1950s grappled with narratives on the raging social issues of poverty and unemployment after Independence (Do Bigha Zamin, Shree 420, Pyaasa, and Anari, among others), there were quite a few films that represented female voices.

On his 16th death anniversary today (25 August), we analyze four of his woman-centric films. 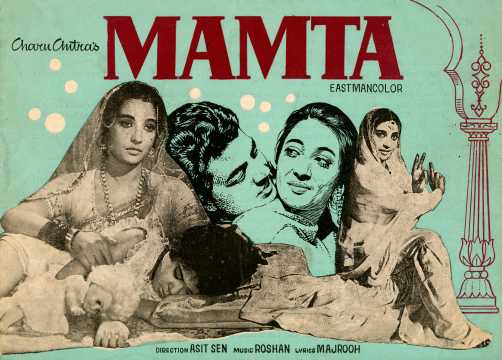 While shifting his craft between the Hindi and Bengali languages, Asit Sen remade a few of his Bengali films into Hindi, Mamta being the first. It was also his first Hindi film. Sen, perhaps, wanted to tread tested waters while making his debut in Hindi cinema. The original Bengali film, Uttar Falguni (1963), was not only critically acclaimed, but had also won the National award for Best Feature Film in Bengali.

Mamta, as did the Bengali original, had Suchitra Sen playing double roles, mother and daughter. Devyani (Suchitra) hails from a poor family and marries a wicked man Rakha to pay off her father's debt. Destiny takes an evil turn and she is traded by her husband but flees in time to save herself. Destitute and pregnant, she is rescued by Meena Bai, who moulds Devyani into a nautch girl, Panna Bai.

After a few peaceful years, the wicked husband traces Devyani out and learns of their daughter, too. In addition to extorting money from Panna Bai, he tries to abduct the girl. Panna Bai decides to admit her daughter Suparna in a convent school far away and thereafter stay away from her as far as possible. Devyani meets Manish Roy (Ashok Kumar), her yesteryear lover, who asks her to leave the nautch business and marry him. She refuses but asks him to adopt her daughter. Roy agrees and takes Suparna under his wing.

While Devyani ruled the plot, she wasn't the independent and bold kind. Her life was, instead, ruled by the concept of motherhood. Her identity came from the existence of her child. Her sacrifices for the safety and happiness of her daughter only contributed to the undue dramatization of ‘mamta’ in Indian society. 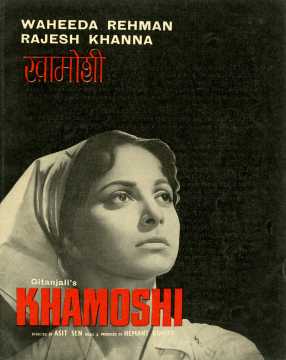 Khamoshi, too, was a remake of one of Asit Sen's Bengali films, Deep Jele Jai (1959). This story had more of a humanist representation of the lead character and left a lasting impression on the viewer.

A committed nurse, Radha Mitra (Waheeda Rehman), at a mental asylum is known for her prowess in curing patients with love and care. In fact, she is part of an experiment that aims to prove that psychiatric patients can be cured with love and care. However, what science fails to take into account is the trauma the nurse goes through while getting emotionally close to the patient.

Radha had once helped a patient Dev Kumar (Dharmendra) out of his mental illness. He leaves the hospital hale and hearty. But the process has eaten into Radha as she had really fallen in love with Dev. There comes another patient, Arun Chaudhary (Rajesh Khanna), and Radha is asked to repeat the ‘curing’ process. Yet again she is successful in treating the patient but ends up losing her mind.

Though the film had a female character at the centre, the message can be applied to people in general. The film rebukes the belief that an individual is happy and normal just because of his/her silence in the matter. It also questioned the ways of scientific advancement and research. Can scientific research be completely objective and devoid of emotion? 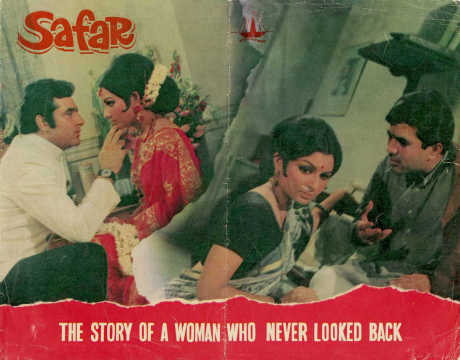 This film was loosely based on Asit Sen’s 1956 Bengali film, Chalaachal. A love triangle with a unique angle, Safar is the tale of Neela (Sharmila Tagore) and her lovers Avinash (Rajesh Khanna) and Shekhar (Feroz Khan).

Neela and Avinash are students at a medical college. Though Avinash loves her, he doesn’t let the affair bloom, owing to his terminal illness. Receiving no firm response from Avinash, Neela marries Shekhar, who is besotted by her, but she fails to reciprocate his love. Shekhar, after a spate of misunderstandings, believes that Neela is having an affair with Avinash. Dejected, he commits suicide. Avinash, too, dies of cancer. Neela is now left alone and decides to dedicate her life to medicine.

The film had some commendable performances from all the lead artistes. Tagore looked beautiful and Khanna gave a fine performance of a terminally ill protagonist, a role he was to repeat the next year with Hrishikesh Mukherjee’s Anand.

However, the amount of tragedy surrounding the female protagonist makes her a bit unreal. At one point, you stop sympathizing for Neela and just wait for the events to unfold, and end. 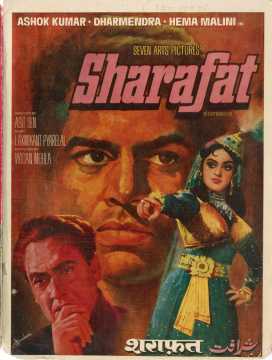 Asit Sen’s Sharafat was again an attempt to highlight the oppressed state of women in a male-dominated society. Chandni (Hema Malini) is both a product and a victim of a hypocritical society. She is the illegitimate daughter of Jagat Ram (Ashok Kumar) and a ‘bazaaru aurat’ (woman of loose character). Her mother passes away leaving her in the care of Kesar Bai, who is supposed to lead Chandni to her biological father. Instead, the woman forces Chandni to become a courtesan.

Enter Rajesh (Dharmendra), a professor who loves Chandni and tries to save her by discovering her father. But alas! the father refuses to accept the illegitimate daughter. Rajesh and Chandni in their innocence try to begin a new life by eloping. However, the bliss lasts only for a day and Rajesh is beaten up by men from ‘civil’ society for bringing a nautch girl into the neighbourhood. After a few more dramatic scenes, Jagat Ram finally accepts Chandni and gives her his name.

The film tried to make the point that women should be given a chance, irrespective of where they hailed from. However, the onus of acceptance is again put on the shoulders of men. The woman will find a name only if a man is ready to share it. The woman, even if she is a ‘matric pass’, is incapable of finding her own identity.

Though these films did not give out the message of an individualistic and independent woman, Asit Sen needs to be commended for moving away from the cliched formula and giving women prominent space in his Bengali and Hindi work.