The three film personalities were presented with Lifetime Achievement awards, on 19 August, for their outstanding contributions to Indian cinema.

The event began with a musical tribute to the past of Indian cinema and played hits old and new, including some from Bimal Roy’s hits - 'Chadh Gayo Papi Bichhua’ from Madhumati (1958), among others. The film society, which was formed in 1996, is headed by Roy’s daughter, Rinki Roy Bhattacharya.

Click here for all the pictures from the event.

It also shared its upcoming plans for a Bimal Roy museum to commemorate the filmmaker, his films and their memorabilia. Rinki Roy Bhattacharya has been working to restore his films so that future generations can view them like they were meant to. 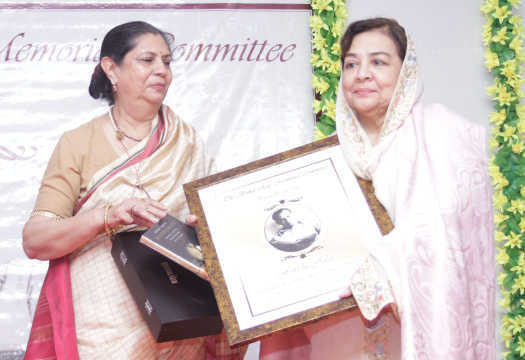 Actress Farida Jalal was honoured first and awarded the Lifetime Achievement award by Rinki Roy Bhattacharya. Jalal began her career in 1967 with Taqdeer and since then has been a part of iconic films like Aradhana (1969), Paras (1971), Majboor (1974), Henna (1991), the critically acclaimed Mammo (1994) and Dilwale Dulhania Le Jayenge (1995). She was last seen on the television show Satrangi Sasural.

Jalal thanked the audience and the Bimal Roy Memorial Committee and gave a special thank you to Rinki Roy Bhattacharya “for thinking that I am worthy of this honour”.

Filmmaker Kundan Shah was honoured next. An alumnus of the Film and Television Institute of India (FTII) in Pune, he made his directorial debut with the cult classic Jaane Bhi Do Yaaro (1983). He then directed seminal television shows like Yeh Jo Hai Zindagi, Nukkad and Wagle Ki Duniya in the 1980s. Kundan worked with Shah Rukh Khan on Kabhi Haan Kabhi Naa (1994) and Preity Zinta on Kya Kehna (2000). P Se PM Tak (2014) was his last feature film. 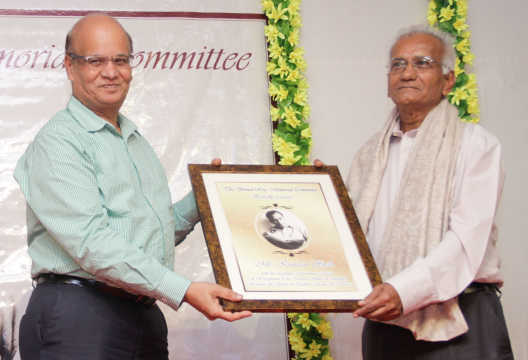 SL Pokharna, President of Raymond Limited presented Kundan with the Lifetime Achievement award. Kundan accepted the honour and said he had grown up Bimal Roy’s films without knowing who he was. He said, “It has filled me with such pleasure, even when I was young and even when I’m 69 today. Whenever I see the films, when you walk out of the hall, your feet are not on the ground. You’re floating and the film remains with you for a long time.”

Finally, the last honouree of the night was actor Naseeruddin Shah. The National Award-winner was accompanied by his wife, actress Ratna Pathak Shah. Lalitha Lajmi, renowned artist and sister of the late Guru Dutt, handed Naseeruddin his Lifetime Achievement award. 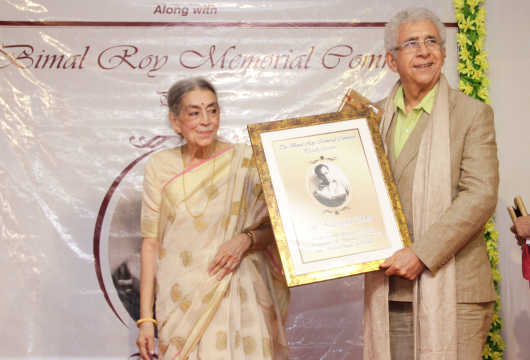 Naseeruddin said he hadn’t seen any Bimal Roy films as a child like Kundan had, but “in a way, I’m glad that I saw his masterpieces like Do Bigha Zamin (1953) and Madhumati (1958) much later when I was of an age to appreciate the value of aesthetics and the tremendous ability he had to tell a story through pictures.”

He warmly thanked the Bimal Roy Memorial Committee, Rinki Roy Bhattacharya and Lalitha Lajmi, for the honour, along with Kundan and Jalal. He wondered and joked about who among them came first, second and third. Naseeruddin acted in Jaane Bhi Do Yaaro, but has never worked with Jalal in a film.

Naseeruddin stated that he never thought the making of Jaane Bhi Do Yaaro was at all pleasurable, garnering laughs from the audience. But he said, “I am quite astonished and delighted and sure, so is Kundan, that almost 40 years after the film was made, it is still being celebrated and remembered.”

Actor Rakesh Bedi, who also attended the event, took to the stage to entertain the audience with humorous anecdotes about each of the night’s honourees, especially Jalal, his co-star from Yeh Jo Hai Zindagi. He praised Rinki Roy Bhattacharya for her ongoing efforts to keep her father’s memory alive, claiming that every luminary should have a daughter like her.

At the end, Rinki Roy Bhattacharya thanked the gathered members, sponsors and well-wisher along with the night’s honourees. She said, “While I offer thanks, I feel compelled to drive home some important urgent issues. Priceless legacies are almost destroyed. It is not just Bimal Roy’s films, but film related memorabilia, like posters, booklets, are in danger. We all love cinema. I think we can all rise to the occasion and save these priceless cinematic legacies from vanishing. Let us pledge to save the past for future.”

The last line, ‘Save the past for the future’ is, incidentally, the motto of the Bimal Roy Memorial Committee & Film Society.