Baby Naaz: The star that could have been


On her 73rd birth anniversary today (20 August), we look back at the troubled life of the talented actress Baby Naaz aka Salma Baig.

A young Baby Naaz in Boot Polish (1954) and later as a young lady.
give your opinion

By the time she was 10, Kumari Naaz (born as Salma Baig and also called Baby Naaz) was already a star. She was one of the child artistes in RK Films’ Boot Polish (1954). She earned rave reviews for her earnest natural performance from The New York Times and a special distinction (along with co-actor Rattan Kumar) from Cannes Film Festival in 1955, where the film was shown in competition.

However, in an interview with magazine Stardust (year unknown), the actress spoke of a rather unhappy childhood. Naaz tried to commit suicide twice when she was merely 10 years old. Her attempts to jump in a well, were quashed by an observant ayah (nanny).

In the interview, the actress had recounted her emotional state at the time, “My ayah used to tell me stories about how people ended their lives by jumping into this well. So, one day when I was all alone at home, I ran to the well. Somehow, my ayah who spotted me, ran after me and brought me home. She was the only one who cared for me.”

The young girl debuted on stage when she was four, and in films when she was eight. Her father, Mirza Dawood Baig, was an unsuccessful story writer and somehow over time, Naaz became the only earning member of the family.

In the same interview, she said, “I wanted to study, but unfortunately I had no time to breathe and had to forget about school. I left studies, for my mother didn’t stop accepting films on my behalf and my father stopped working. My mother was too used to making money out of me and didn’t want to forgo this easy life. She wanted me to work for her comforts and I was both too young and in awe of my parents to refuse!”

She became the highest paid child artiste and worked in around 120 films. But her reality was that she was being neglected by her parents who were constantly fighting with each other. Sometimes, after coming home from the day's shoot, she would fall asleep without having dinner. By the time she turned 12, her parents separated and Kumari Naaz had to stay with her mother, who remarried when Naaz was 16 years old. 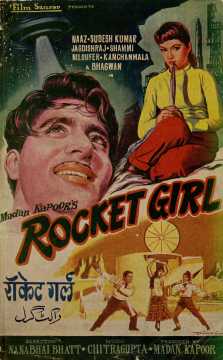 With a troubled family life, Kumari Naaz could never graduate to the big league. There was no one to manage her career and her mother accepted any and every role that came by. Raj Kapoor wanted to send Kumari Naaz to a Swiss finishing school for five years, intending to launch her under his banner after she returned. But Kumari Naaz recalled that her mother had wanted to go along with her to Switzerland too, and turned down the offer when she realised that would not be possible.

Besides her iconic role as Belu in Boot Polish (1954), film buffs may remember Kumari Naaz as the younger version of Parvati in Devdas (1955), as Raaj Kumar’s younger sister Munni in Dil Apna Aur Preet Parai (1960) and a young dancer in Mujhe Jeene Do (1963). She tried her hands at lead roles too, with Lambe Haath (1960) opposite Mehmood, and Char Dervesh (1964) opposite the dashing Feroz Khan.

Kumari Naaz was a strong actress who, from a young age, not only handled emotional and comedic scenes with ease, but also danced effortlessly in front of the camera. However, despite all her talents, she kept playing supporting characters even in the later films of the 1970s. She married actor Subbiraj (cousin of Raj Kapoor) in 1965 and continued working. The two had acted together in Mera Ghar Mere Bachchay (1960) and Dekha Pyar Tumhara (1963).

Not many are aware that she transitioned into a second career as a dubbing artiste. Before Sridevi started using her own voice, Kumari Naaz dubbed for her in the early Hindi hits of the 1980s. It was a far cry from the status she enjoyed during her early years in Hindi cinema.

The number of child actors sustaining their careers in cinema is low. In the 1950s and 1960s, there were those like Nargis that made it big and others like Daisy Irani and Kumari Naaz that didn’t. Kumari Naaz stopped acting by the 1980s and was diagnosed with tumours in the liver during the 1990s. Despite undergoing different kinds of treatments, she passed away on 19 October 1995.