Remembering Baburao Patel's irreverence for the powers that be on India's Independence Day.

What did Kamini Kaushal find when Dev Anand embraced her in Ziddi?
She discovered that Dilip Kumar embraced better in Shaheed.

This was the typical no holds barred response of Baburao Patel, the inimitable editor of the magazine Filmindia, that is no less than an institution in film journalism.

Opinionated and uncompromising, Baburao’s reviews went straight for the jugular, never mincing words about the quality of the film or the performances. His much dreaded, acerbic pen ensured that no one was spared. Actors were called out for their features, age, assets (or the lack thereof) and films were routinely described as being putrid (Afsar -1950), stupid and boring (Ziddi - 1948), unattractive (Miss Coca-Cola - 1955), while lavish praise was bestowed upon them when he deemed them to be worthy.

Launched in 1935, Filmindia continued its run till 1985 and remains an unsurpassed archive of the early decades of Hindi cinema, as seen through the very sharply focused eyes of its editor.

Saadat Hasan Manto called Baburao “a soft-hearted iconoclast”, while Khwaja Ahmad Abbas, who wrote for Filmindia for some time, aptly called Baburao’s style the “sledge hammer style of film journalism”. Despite their differences in journalistic ethics, Baburao and Abbas respected each other and the former even left the magazine in Abbas’s care when he went for a tour of Hollywood in 1939.

Filmindia enjoyed a wide readership with legions of subscribers in India and abroad. The Question and Answer column or Editor’s mail was especially popular and Baburao’s tongue-in-cheek responses made for delightful reading. Once a reader asked, “Who is more talented: V Shantaram or Kishore Sahu”, to which Baburao replied, “Kishore Sahu. He has more education, more intelligence and better art”.

The column was immensely popular and it was his wife Sushila Rani who persuaded him to give more space to it in the magazine.

Though devoted to cinema, Filmindia would regularly engage with issues not pertinent to the film industry. This, in time, veered towards a full-blown interest in politics. In the July 1947 edition of the magazine a reader asked, “Who is the best Indian politician of today?” to which Baburao replied, “Mahomed Ali Jinnah. He got what he didn’t have. Others lost what they had.” 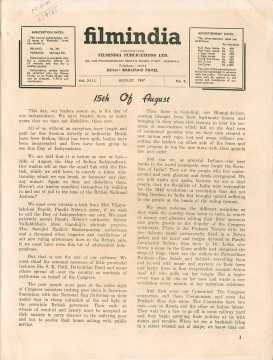 Baburao had started writing on issues of national interest, and with the independence of the nation and its partition on the horizon, this interest was further fuelled, especially as he opposed the idea of Pakistan. His editorial for the August 1947 issue offers insights into his scepticism as he veers away from offering undiluted praise for the leaders of the country at the time when it marked its independence from British rule.

“This day, our leaders assure us, is the day of our independence. We have trusted them so many years that we dare not disbelieve them now”, begins the editorial. Severely critical of the leaders of the nation he wrote, “We must patiently accept Pandit Nehru’s outbursts, Sardar Vallabhbhai Patel’s jibes, Gandhiji’s platonic prayers, Mrs Sarojini Naidu’s Shakespearean melodrama and a thousand other vagaries and vacillations of our new ruling aristocracy born in the British jails, if we must have even this bit of adulterated independence”.

Reserving his harshest criticism for the Congress leaders, he criticizes the socialists, communists and the Partition of India, as he contemplates on “our heritage on the eve of freedom” saying, “The picture of Mother India on her Day of Independence must look like Venus of Milo with her arms cut and just a little cloth to cover her extreme chastity”.

He ends the editorial by writing, “Let us, however, slap our faces and glow gratefully on the Day of Independence, for freedom, however little, is like ambrosia to the human race. Long Live India”. These words today ring as true as they were when Baburao wrote them. His irreverence for the powers that be offers a refreshing take on the moment of independence and it’s hard not to admire his chutzpah.

In his book titled The Patels of Filmindia, Siddharth Bhatia gives us an insight into the Independence day celebrations at Baburao’s residence, “A dozen Brahmin priests had recited Vedic mantras, sweets had been distributed and actors like David, Begum Para and her friend Protima Dasgupta had been invited. Susheela Rani sang Vande Mataram at exactly 12 midnight, which was broadcast through loudspeakers - a photograph showed her smiling, holding a tanpura” (44).

Interestingly, the magazine issue also includes an appeal signed by senior Congress leaders such as Jayaprakash Narayan, Ram Manohar Lohia, Aruna Asaf Ali, Kamladevi Chattopadhyay, and others titled, “Help us build a socialist India”. It states, “We believe that socialism alone is the cement that will bind the torn parts of the country into an enduring unity” and asks for donations with the target of rupees ten lakhs as “TEN LAKHS is a small sum of money compared to the great work that has to be done”.

Once a reader asked Baburao, “Mr. Patel you are so popular, why don’t you stand for elections”? The response was, “And stand on my head and vote with my feet? No sir, I don’t believe in wasting time that way”. But Baburao’s sentiments would change in time as Filmindia and its editor would slowly move into the political arena.

In 1957, Baburao stood for the Lok Sabha elections in Gwalior under the Hindu Mahasabha, and lost. Ten years later, in 1967, he won from Shajapur in Madhya Pradesh and became a Member of Parliament. Although he stood as an independent candidate, he was supported by the Jan Sangh. Hereafter, the magazine was run by Sushila Rani.

His political ambitions were reflected in the magazine’s focus, which had steadily moved away from cinema. To mark the shift, Baburao in 1960 declared that the name of the magazine would be changed to Mother India.

Here are a few gems from the famous column:

Has Gandhiji ever appeared in your dream?
My dreams are colourful. Gandhiji cannot risk them.

Why is our Prime Minister wearing the Bharat Ratna medal round his neck on every occasion which he considers ceremonial?
He is advertising his own product. I knew Nehru would learn something from me if I persevered long enough.

To what school of religion do you belong (Arya Samajist, Sanatanist, Buddhism etc.)?
I am a Hindu, which means a student of philosophy and not a code book follower.

Why do all our leaders wear chappals?
To throw them away quickly and run when they are chased. But in this country they are never chased. Even their damn chappals are stolen and worshipped.

What are Maharashtrians suffering from?
Hereditary laziness and cerebral flatulence!

What is the food that Russians eat?
Propaganda. It gives them a red tongue.