As the nation celebrates 70 years of independence, we revisit the films that made up the tumultuous and momentous year that was 1947.

The year 1947 was momentous for India, as well as the film industry. The nation was divided and two new countries, Pakistan and East Pakistan (now Bangladesh), were formed. In August 1947, 15 million were displaced from their homes and over one million died in the violence that took place when friends and neighbours turned on each other.

In Bombay (now Mumbai), however, the film industry continued to produce movies that enthralled their audiences. Stars were lost (KL Saigal passed away in January, while Master Vinayak passed away a few days after Independence) and future stars were born (actresses Mumtaz, Rakhee and Simi Garewal were all born in 1947). Newcomers stepped into the limelight (most memorably, Raj Kapoor and Madhubala in Kidar Sharma’s Neel Kamal) but most importantly, five films topped the box office that year — Dard, Do Bhai, Jugnu, Mirza Sahibaan and Shehnai.

Three of these movies — Jugnu, Do Bhai and Mirza Sahibaan — featured the singer-actor Noorjehan. These were her last triumphs before she migrated to Pakistan. While Noorjehan left, a new singer emerged to take her place as the top singer. A young woman named Lata Mangeshkar came to the forefront and afterwards her popularity would grow to such an extent that she would dominate the Hindi film music scene for another five decades.

However, 1947 began with the death of singing star KL Saigal on 18 January 1947. Filmindia magazine, in its February issue, had noted at the time that “for a week, after the daily papers flashed the news of Saigal’s death, riots, politics and Pakistan went out of news and the Hindus, the Muslims, the Christians, the Jews, the touchables and the untouchables — one and all reverently discussed the sad and sudden death of Kundan Lal Saigal, the greatest singer the Indian screen had ever produced in its long history of misadventure.”

According to the book, 80 Glorious Days of Indian Cinema, complied by Rajendra Ojha, 182 Hindi films released in 1947. That’s a large number but nothing compared to the over thousand films that are released yearly in the country since then. And out of the 182 films, five flourished and laid claim to the top spots. 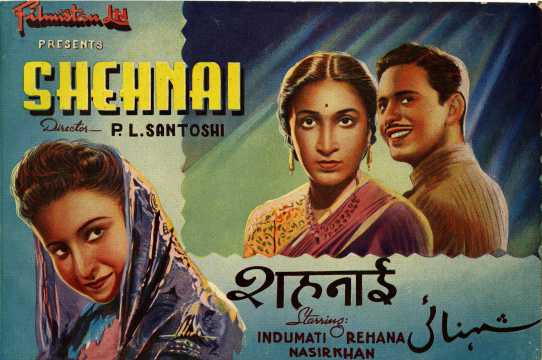 VH Desai played the patriarch of a family with four daughters and each one is wooed in the film by a suitor. The large cast was made up of Rehana, Indumati, Nasir Khan, Dulari, Mumtaz Ali, Kum Kum and Kishore Kumar besides VH Desai. In the turbulent, uncertain times of 1947, the lightness and comedic situations of Shehnai, with its toe-tapping, jazz-inspired music, helped contribute to its success. 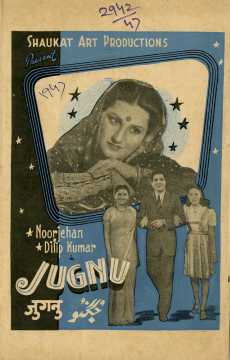 Jugnu (1947) was Dilip Kumar’s first hit at the box office. He had made his debut in Amiya Chakrabarty’s Jwar Bhata (1944) and acted in Pratima (1945) and Milan (1946). All three were Bombay Talkies productions. With Jugnu, he finally ventured out from their umbrella.

The film was directed by Shaukat Hussain Rizvi, husband of Noorjehan, and featured the great singing star opposite Dilip Kumar. The love story of Sooraj and Jugnu moved audiences who bought into the romance of the onscreen couple. It was the only film Dilip Kumar did with the ‘Malika-e-Tarannum’ (queen of melody) as the husband and wife team moved to Pakistan after the Partition. Singer Mohammed Rafi has a cameo in one of the songs.

Another Noorjehan-starrer was Mirza Sahibaan, on the Punjabi legend of lovers Mirza and Sahibaan. 70 years later, the romantic legend still continues to inspire filmmakers even today as is evident with the films Mirzya (2016) and Raabta (2017). Noorjehan’s Mirza was Trilok Kapoor, brother of Prithviraj.

Trilok’s nephew Raj Kapoor had a productive year as well, matching up to his father in Valmiki, and appearing with another newcomer Madhubala (who started out as child artiste Baby Mumtaz) in Kidar Sharma’s Neel Kamal and Mohan Sinha’s Chittor Vijay.

Back to Mirza Sahibaan, the film’s music was composed by Pandit Amarnath who passed away before it released. His younger brothers, Husnlal- Bhagatram, went on to form the first composer duo in the industry. They assisted him on the songs of the film. 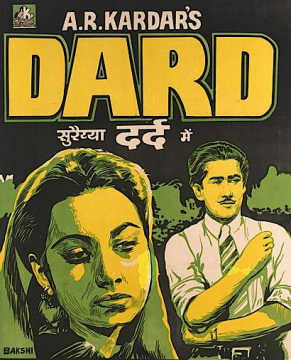 An October release, AR Kardar’s Dard (1947) had actress-singer Suraiya as the second lead to Munawar Sultana (who was incidentally called Suraiya in the film). The Muslim social also featured Kardar’s brother Nusrat as the lead in a love triangle with the two heroines. Like Noorjehan, Nusrat went to Pakistan and began acting there.

The film’s music was composed by Naushad who primarily used the voices of Suraiya, Shamshad Begum and Uma Devi on the hit soundtrack. Uma Devi found more fame as a comedienne instead and was known as Tun Tun. But initially, she came to Mumbai with dreams of becoming a singer. In Dard, Naushad gave the opportunity to singer for Munawar Sultana and the solo songs ‘Afsana Likh Rahi Hoon’ and ‘Yeh Kaun Chala Yeh Kaun Chala’ were popular.

Another Filmistan success was Do Bhai (1947). The studio was having a banner year with the success of Shehnai, Sajan and Sindoor. Do Bhai, directed by Munshi Dil, starred Kamini Kaushal, Rajan Haskar, and Noorjehan. Geeta Roy (she married Guru Dutt in 1953), sung her first song for SD Burman (his first big breakthrough as well) in the film and one of them, the melancholy ‘Mera Sundar Sapna Beet Gaya’ went on to become a big hit that year.

Kaushal acted in the film as a freelancer and found herself at an advantage with a hit. The June issue of Filmindia magazine claimed in its ‘Bombay Calling’ section that the unease in the industry had diminished the power of the star system and their high salaries. “Veera, Neena, Khurshid, Suvanalata, Suraiya, Nargis, Snehaprabha, Shobhana Samarth, Shamim, Mumtaz Shanti, Chandramoha, Motilal, Surendra, etc — all war-time money-spinners in the production field now have no new pictures in hand. In fact no one seems to want them at any price — even free.”

In certain cases, it was business as usual but there was a definite sense in the air that change was afoot in the industry. Theatres in Kolkata stopped playing the British anthem after 3 June 1947. It was common for theatres to play the national anthem after every show. Of course, today, it has become compulsory to play the Indian national anthem before any film in the theatre.

The common factor amongst all these films that did well in 1947 is that they were all big musical hits. Other 1947 songs that did well that were ‘Mohabbat Main Kabhi Aisi’ composed by Khurshid Anwar from Parwana, ‘Sawaan Ki Ghata O Dheere Dheere Aana’ composed by Sudhir Phadke from Aage Badho, and ‘Dil Wale Jal Jal Kar Hi Mar Jaana’ composed by Naushad for Natak.

Moreover, the popular stars of all these films were Muslim. With the Partition, some chose to go to Pakistan, but a number of them stayed back to acquire various levels of fame. Dilip Kumar and Suraiya become beloved with each film release while others like Rehana and Munawar Sultana saw their stars fade.

In a period of great uncertainty (for a long time it was believed that the British would give India its independence by 1948), the film industry soldiered on, providing entertainment and escape to its citizens. Since 1947, the Hindi film industry began to show its dominance and grew in number and popularity, year by year.

Today, there are fewer fantasy films and historicals that once lead the way in the 1940s. Romances are still the flavour of the season, but have repackaged to reflect the vastly changing society. A cursory glance at the list of titles released in 1947 shows films like Beete Din and Elan (both social dramas), Chheen Le Azadi (a costume film), Hatimtai (a fantasy film) and Meera and Krishna Sudama (a devotional and mythological film respectively). 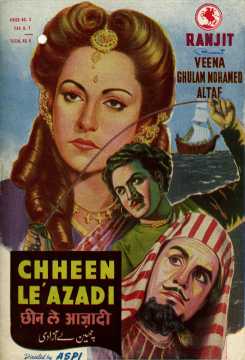 There was a rare biopic Matwala Shair Ramjoshi directed by Baburao Painter and V Shantaram amongst the popular action films like Himmatwali, Stunt Queen starring Fearless Nadia. Overall the films of that year did not reflect the real-life political turmoil but instead focused on stories which provided respite from the viewer’s pressing troubles. 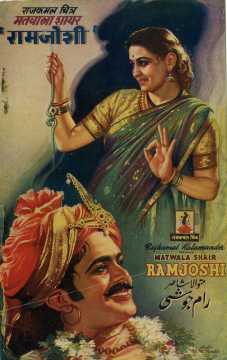 In coming years, the industry slowly turned to tell the stories of what happened in 1947 as many survivors did not come forward to tell their stories. They considered it a disturbing and shameful section of their lives. Filmmakers like MS Sathyu in Garm Hava (1974) and Deepa Mehta in 1947 Earth (1998) explored the devastating consequences of Partition with individual stories of their characters.

In 2017, Srijit Mukherji’s Begum Jaan and Gurinder Chadha’s Partition: 1947 have started the conversation back on the eventful year of India’s history. But by and large, films focusing on the stories of 1947 have been in the minority.