Janmashtami special: Guess who played Krishna 29 times in his career?


On the day of the birth of Lord Krishna, here's revisiting the late veteran actor Shahu Modak's unusual record of playing the Hindu god.

Shahu Modak in and as Bhagwan Shri Krishna
give your opinion

Devotional films about gods were a regular feature in Indian cinema during the black and white era. One actor who had achieved mastery over playing various gods was the versatile Shahu Modak. Throughout his career, he played devotional characters like Krishna, Ram, Hanuman, Bharat, Sant Dnyaneshwar, Narsi Mehta, etc.

But he was considered a specialist in playing Lord Krishna. In fact, he holds a special record for playing the role of Krishna as many as 29 times in his career.

His wife Pratibha Modak shared this trivia along with other interesting bits during a recent exclusive chat with Cinestaan.com.

“He played Krishna 29 times. Sometimes he used to feel that he got so many chances to play Krishna because he must have been a gwal baal (child cow herd) with Krishna in his previous birth [laughs]. Someone had once sarcastically written in an article that he sometimes used to consider himself Krishna,” she said.

It all started when Shahu Modak played Krishna in his very first film as a child actor, titled Shyaam Sunder (1932). Pratibha Modak informed, “Bhalji Pendharkar wanted to make a film on the childhood of Krishna. In those times, only those who could sing were cast. They wanted a boy who looked good, could sing and fell in the age group of 12-13 years.” 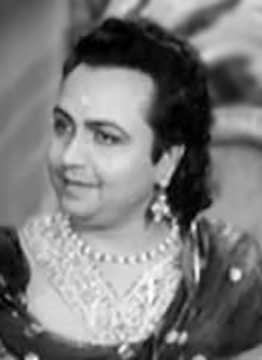 A famous stage actor helped them. “Bhaurao Datare, who was known for playing Shivaji Maharaj on stage, told the makers that Modaks' child looks exactly like Krishna but they are Christians by faith. Datare wasn’t sure Modak’s family would allow him to play a Hindu god, but he felt there was no harm in asking. So, one day Nanasaheb Sarpotdar, Bhalji Pendharkar and Dadasaheb Torne went to Ahmednagar,” she said.

Shahu Modak’s first acting offer came as a surprise. “My husband was studying in the fourth standard then. When he returned from school during the break, he was surprised to see strangers in his house. As he was about to leave, his father asked him to wait. Sarpotdar, Pendharkar and Torne asked him to sing. He did a musical performance of Deenanath Mangeshkar. They loved it and asked if he would act in a film. He didn’t understand this then, so he instantly agreed,” recalled wife Pratibha Modak.

But all wasn’t hunky dory. “A huge conflict erupted in the house. During those times, people thought that a person who works in films goes wayward. So, women in the house started opposing it. But his father pointed out that these are respectable people, not just any chaps,” she said. “He also assured that Shahu’s studies won’t be affected. Finally, all agreed.”

Nitish Bhardwaj is well-known for playing Krishna in BR Chopra’s classic TV series, Mahabharat. Not many would know that he took guidance from Shahu Modak. “BR Chopra told Nitish that if you wish to attain success in the role of Krishna, you should take blessings of the industry’s first Krishna. So, he came home and stayed for a long time. He asked him (Shahu Modak) as to how he brings that specific smile while playing Krishna? He said, ‘You don’t need to bring it. It comes with Krishna’s blessings,’” she added.

Shahu Modak’s debut turned out to be a remarkable success. “Shyaam Sunder became the first talkie to complete its silver jubilee. Producers started queuing up outside his house. In those days they used to make films in two languages (Marathi and Hindi). The film had eight songs and all were sung by him. They became so popular,” she said.

In fact, Pratibha Modak also narrated an incident when they were taken aback by the popularity of Shyaam Sunder. "Years later when we had gone for a show in Solapur, a person working at the venue urged us to come to his office right away. We wondered what he was up to. He made us listen to two songs from Shyaam Sunder — ‘Bhave Varit Go Sevela’ and ‘Bhava Mani Nana Kadhi Na Tyaga Swabhimana’ We were overwhelmed.”

Shahu Modak’s last film was also about Krishna and was titled Krishna-Krishna (1986). However, in this film he played the role of Krishna’s guru, Sandeepan.