Sridevi in Mr India (1987)
give your opinion

Hindi film audiences first saw a young Sridevi in Julie (1975) where she played Irene, the younger sister of lead actress Lakshmi who was playing Julie. She was only 12 but within four years, she was playing the lead in Solva Sawan (1979) with Amol Palekar. A remake of the Tamil film 16 Vayathinile (1977), Sridevi reprised her role in the Hindi version.

However, while the Tamil film with co-stars Rajinikanth and Kamal Haasan was a big hit, the Hindi remake failed to connect with audiences. It wasn’t until Sadma (1983), another remake of a Tamil film, is when Sridevi finally broke through and in a really big way.

Her role as the childlike Reshmi, a young woman who regresses to a seven-year-old, was nuanced and challenging. But the young actress nailed it. She didn’t win any major awards, but everyone knew that she had arrived.

Soon, the producers and directors of the Hindi film industry came calling. At 20, Sridevi was already a veteran of Tamil, Telugu and Malayalam cinema and had worked in a few Kannada films as well. She had been acting since age four as a child artiste.

After Vyjayanthimala and Hema Malini, she too successfully transitioned from the south to mainstream commercial cinema. Her next film after Sadma (1983) was the populist Himmatwala (1983) in which she was paired with Jeetendra. They worked together in 17 films in a five year period from 1983 to 1988!

Both were talented dancers and their films, most of them remakes of south films, were known for their entertaining dance numbers. In 1986, when she was the one of the most sought after actresses of the time, she took on the role of Rajni, a shape-shifting snake who assumes human form to avenge the death of her partner, in Harmesh Malhotra’s Nagina.

At the hands of anyone else, the role could have turned campy, but Sridevi owned it completely. The film, with co-stars Rishi Kapoor and Amrish Puri, was a huge blockbuster and in Nigahen (1989), she played Rajni’s daughter Neelam in the first sequel in Hindi cinema.

With Karma (1986), Sridevi stepped into Subhash Ghai’s starry ensemble alongside Dilip Kumar, Nutan, Naseeruddin Shah, Jackie Shroff, Anil Kapoor, Anupam Kher and Poonam Dillon. She had a small part as the love interest of Shroff like she did in Feroz Khan’s Janbaaz (1986) as Khan’s late girlfriend Seema who overdoses. It helped evolve her image to a glamorous actress dressed in colourful chiffon saris than her earlier films, in which she was more fashionably challenged (it was the 1980s, after all!)

Sridevi was the undisputed queen of Hindi cinema during this time and pursued by everyone for their film. She signed Shekhar Kapur’s Mr. India, produced by Boney Kapoor and co-starring his brother Anil as the title character. Her character, a journalist Seema, who doggedly wants to track down the invisible hero, showed off Sridevi’s funny bone in charming sequence where she channels Charlie Chaplin quite literally.

30 years of Mr India: ‘When viewers can’t get over it, how can the makers?’

Kavita Krishnamurthy: ‘Hawa Hawaii’ was a big feather in my cap

During this time, she was the highest paid actress and became to be known as the ‘female Amitabh Bachchan’. Yash Chopra cast her as his vision of the perfect woman in Chandni (1989) in which she looked her best. That same year, Sridevi also had Chaal Baaz (1989) where she played twins, Anju and Manju in a retelling of Seeta Aur Geeta (1972).

Once again, she showed off range going from docile to authoritative as each sister. She overshadowed her co-stars Rajinikanth and Sunny Deol, completely overtaking them in the film that seemed tailor made for her. Sridevi won her first Filmfare award for best actress for her dual performances.

In 1991, she reunited with her Chandni director, Yash Chopra for Lamhe with Anil Kapoor. Both she and Kapoor gave wonderful performances. Sridevi once again had a double role as Pallavi and her daughter Pooja. Anil Kapoor played the younger Viren who falls in love with the older Pallavi. After her death in a tragic accident, he becomes the benefactor of Pooja. Years later, a grown up Pooja falls in love with Viren. 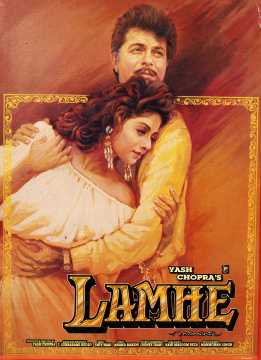 The film was rejected at the time of release by the public, even though it won five Filmfare awards, including best film and best actress for Sridevi. It has since become a cult classic and is remembered for Sridevi’s acting — her confidence and ease as Pallavi matched her vulnerability and naughtiness as Pooja.

In the 1990s, Madhuri Dixit emerged a worthy rival to Sridevi and the two actresses battled it out for top roles. In 1993, Sridevi faced the biggest disaster of her career with Roop Ki Rani Choron Ka Raja. The most expensive film at the time, the Satish Kaushik film flopped badly.

Sridevi was now acting with a newer generation of heroes by the mid-1990s — Sanjay Dutt, Salman Khan and Shah Rukh Khan. In 1996, she married producer Boney Kapoor, her longtime admirer and brother of frequent co-star Anil.

Her last hurrah before she temporarily retired to have children was Judaai (1997). In the film, a home production, she played a housewife Kajal who longs for a more lavish lifestyle and agrees to share her husband Raaj (Anil Kapoor) with the wealthy Jhanvi (Urmila Matondkar).

It was 15 years later that the Hindi film audience saw her again with Gauri Shinde’s English Vinglish (2012). A different Sridevi walked across the screen as housewife Shashi Godbole — she was older and appeared more vulnerable in a new maternal role, although sparks of the actress she used to be, showed up occassionally onscreen.

It took another five years before she took another role in Hindi cinema; she returned to Tamil cinema with Puli (2015). This past July, she returned with Mom (2017) as Devki, a teacher who becomes a step-mother to her student Arya (Sajal Ali). After Arya is sexually assaulted at a party and loses her case in the court of law, Devki takes it upon herself to deliver justice to those accused.

It is a triumphant return to acting, even though it may not have fared well financially. Onscreen, Sridevi fully embodies the characters she plays — she was Chandni, Seema or Shashi. She can tap into any emotion from sadness to happiness and get a viewer to empathise with her character.

From Sadma (1983) to Mom (2017), Sridevi has demonstrated her range adeptly. One hopes she doesn’t take another long break from acting — Hindi cinema has missed her.