Happy birthday Sridevi: Remembering one of her finest performances in Sadma


On Sridevi’s birthday today (13 August), we take a look at Sadma which remains a unique film in its exploration of an unusual relationship between a young woman suffering from amnesia and a schoolteacher.

A remake of Balu Mahendra's Tamil Film Moondram Pirai (1982), starring Sridevi and Kamal Haasan, Sadma remains a unique film in its exploration of an unusual relationship between a young woman suffering from amnesia and a schoolteacher. The Hindi version was initially to feature Dimple Kapadia in the lead role but the original lead actors reprised their roles and the film remains a milestone in the careers of both actors.

A young girl, Nehalata (Sridevi) meets with an accident and loses her memory. She is diagnosed with retrograde amnesia, wherein she has regressed to being a seven-year-old child. She does not remember anything that happened after that age and cannot even recognise her parents who have aged. She is sent away for treatment and somehow ends up in a brothel.

Somprakash/ Somu (Kamal Haasan) is a schoolteacher who is coaxed by his friend (Gufi Paintal) to enjoy life a little and takes Somu to a brothel. He sees Nehalata, who is renamed Reshmi, and takes a liking to her. But both of them are unsure of what to make of each other. While talking to her, Somu realises her condition and seeing her in a vulnerable state, decides to rescue her. He takes her to his home in the hills and from hereon, bears the responsibility of Reshmi. Meanwhile, her parents are desperately trying to search for her with the help of the police.

While amnesia has featured as a plotline in several films — Yaarana (1981), Henna (1973), and the recent Ghajini (2008) to name a few — the focus of Sadma is remarkably different as it concentrates on the relationship between Reshmi and her caregiver, Somu. It is an unusual exploration of people who are unrelated to each other but come to depend upon one another.

We see Reshmi’s helplessness and lack of self-awareness as she doesn’t even know that she is in a brothel, let alone the heinous nature of what she has been put through. Once rescued, she comes to rely on Somu completely. She is vulnerable, demanding, frustrating, playful and winsome, all in parts. He, in turn, indulges her and takes care of her with tremendous affection.

Usually grown-ups performing as children feel like fingernails on a chalkboard, but Sridevi’s acting is par excellence as she moulds herself into the character of a seven-year-old girl. At times it seems like she is acting like someone even younger, but that is easily forgiven as she uninhibitedly adopts the mannerisms, innocence, and the sense of wonder of a child in every frame of the film. The way in which she greedily eats an ice-cream (two ice-creams at the same time!), plays with her skirt, clings to her dog, calls Somu endearingly when she wants him to do something; all flow naturally in Sridevi’s performance.

Complimenting her acting is her natural look sans make-up when she plays a child. In an interview, Haasan mentioned that the director would give Sridevi coconut to rub on her face to ensure that there was no make-up used by her. This is in stark contrast with the way she looks as a young woman, when she is all dressed up.

Haasan’s understated performance as the school teacher who veers towards becoming a caregiver to a stranger is beautifully nuanced. He doesn’t quite know why he has rescued Reshmi, but feels immensely compassionate towards her. There is a sincerity of emotion through which we see that the bond between him and Reshmi is never that of desire. The notion of a romance between the two is eschewed, even though interestingly, he finds her in a brothel. There is only one fantasy sequence where Somu imagines Reshmi to be clad in a red sari. But he quickly dismisses the idea and his paternal nurturing self resumes. 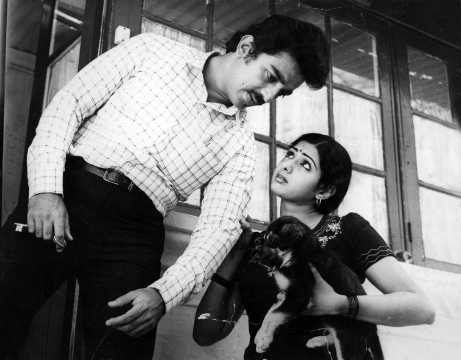 The performance of both lead actors is so well-balanced that they keep us invested in the film. As there is a transformation in Sridevi and she recovers, her expressions change instantaneously. Towards the emotionally charged, poignant end of the film, Haasan’s hitherto understated performance crumbles to mirror his desperation and reaches a fever pitch. He won the National Award for Best Actor for the original Tamil version of the film.