She was one of the earliest female music composers of Indian cinema, whose original tunes were remade later by Kishore Kumar. On her 37th death anniversary, we chart some of her key contributions to the industry.

The Bombay Talkies studios was a place where talent was discovered and nurtured. Actors like Ashok Kumar and Dilip Kumar and filmmakers like Amiya Chakrabarty and Gyan Mukerjee all began their careers from this studio. So did Saraswati Devi, with her first film Jawani Ki Hawa (1935). She was one of the earliest female music composers of Indian cinema.

Very few know that Saraswati Devi was only her screen name. She was born Khursheed Manchershah Minocher-Homji in 1912 and grew up learning Hindustani classical music. Young Khursheed learnt music from Pandit Vishnu Narayan Bhatkhande, a classical singer and musicologist. She later studied the dhrupad and dhamar styles of singing at Marris College of Music in Lucknow, which is now known as the VN Bhatkhande Music Institute University.

Along with her three sisters, Khursheed performed for musical programmes on All India Radio in Mumbai. The sisters played the sitar, mandolin and the dilruba, while Khursheed sang and played the organ. In the mid to late 1920s, their group became known as the Homji Sisters’s Orchestra.

In the early 1930s, Khursheed met Himanshu Rai at a musical concert in Lucknow, who had learnt filmmaking in Europe and was keen on translating his learnings in India. It is also said that Rai had heard of Khursheed through her musical recordings on radio. He offered her the job of a music composer at the studio he co-founded in Mumbai, called Bombay Talkies. This is how she came on board the studio's first offering, Jawani Ki Hawa (1935). Her younger sister Manek also joined Bombay Talkies as an actress. 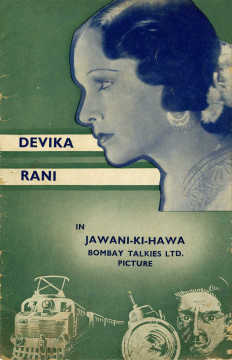 Bombay Talkies became the first public limited film company and issued its shares on 26 February, 1934 to the public. However, the company’s influential and wealthy board of directors, including FE Dinshaw, Sir Phiroze Sethna and Sir Cawasji Jehangir, and the Parsi community at large were outraged that the two young women from their community were joining the big, bad world of films.

They believed that cinema wasn’t the place for daughters of respectable families to join, a general perception of the time. Himanshu Rai firmly stood behind the duo and their right to join the industry. But because of the protests, Khursheed and Manek’s names were changed to Saraswati Devi and Chandraprabha respectively.

For her first film assignment, Saraswati Devi also had to teach the film’s leading lady, Devika Rani (wife of Himanshu Rai), to sing. During this time, the actors and actresses also had to sing their own songs. The music composer had to adjust her songs to fit the talents of the star cast in the film. 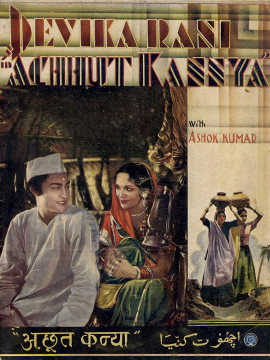 From 1935 to 1939, Saraswati Devi was the only composer for all of Bombay Talkies productions and in 1940, she composed a few films alongside Ramchandra Pal. In 1936, with Achhut Kanya, she achieved great fame and acclaim for ‘Main Ban Ki Chidhiya’ sung by the film’s stars, Ashok Kumar and Devika Rani. The hours of training Saraswati Devi had put in to make sure they sang the song perfectly live onscreen, had paid off.

Saraswati Devi is credited to have sung a playback for a song in Jawani Ki Hawa for her sister Chandraprabha, who was acting in the film, but turned up with a sore throat on the day the song was to be shot. This is when Himanshu Rai asked Saraswati Devi to sing in the background while her sister lip-synced. This wasn’t the first instance of playback singing though, that one was scored by composer RC Boral in Kolkata who did it with the film Dhoop Chaaon (1935), a remake of the Bengali film, Bhagya Chakra (1934).

After Himanshu Rai’s sudden death in 1940, Saraswati Devi stayed on for another year and Naya Sansar (1941) became the last Bombay Talkies film she composed for. She moved on to compose for films like Minerva Movietone’s Prarthana (1943), Nandlal Jaswantlal’s Amrapali (1945) and Atre Pictures’ Khandani (1947). Her last film was most likely Bachelor Husband (1950).

Her compositions live on, even though they have been repackaged for other productions. Saraswati Devi composed 'Koi Humdum Na Raha' for actor-singer Ashok Kumar’s Jeevan Naiya in 1936. Twenty-five years later, Ashok’s younger brother Kishore Kumar sang a new version of the song in his home production, Jhumroo (1961).

An article on Live Mint pointed how the two songs differed and how her composition had been altered, “The original is clearly a song firmly anchored in Raga Jhinjhoti with the tabla providing a steady and conventional rhythmic accompaniment. The orchestration faithfully repeats tutti, the main song melody. Given Saraswati Devi’s training in Hindustani classical music, this is by no means surprising. In contrast, Kishore Kumar’s exquisite and expressive rendering frees the song from its raag–taal casing even while the original melody is retained faithfully, and gives it the hybrid form and structure of the quintessential Hindi film song. This too is not surprising given Kishore Kumar’s lack of formal training.”

The 1961 version had none of the complexities of the earlier version and it is the latter one that is sadly remembered.

Saraswati Devi and her sister Chandraprabha lived together and took care of six adopted children. She had a hip bone fracture after falling from a bus and was only 68 when she died on 10 August, 1980. It is said that no one from the industry came to help her during her hour of need; her neighbours were the ones who took care of her.

In the 1930s, like Jaddanbai and Bibbo (Ishrat Sultana), Saraswati Devi had gone ahead to compose music without thinking much of the rules and guidelines of society. Author Ashok Ranade writes of Saraswati Devi in his book, Hindi Film Song: Music Beyond Boundaries, “The nature of her contribution to Hindi film in the early period becomes doubly creditable when one realises that there was no ready model available for her when she took the plunge in virtually uncharted musical waters!”