Alok Nath was expelled from school for drug use, says author Aseem Chhabra


The noted film critic said he had passed out of the same school and college where Alok Nath studied.

Noted author and film critic Aseem Chhabra dropped a bombshell when in a Twitter conversation he revealed that actor Alok Nath was expelled from school for alleged drug use.

It all started with Chhabra tweeting why politcial writers in India are arrogant.

Can someone explain why many of the political writers (liberal, others) in India are also so bloody arrogant? What makes them so superior?

Chhabra, who enjoys a sizeable following on Twitter, was soon flooded with replies. The conversation then veered to a personal level where Chhabra revealed that he went to Hindu College in Delhi. Chhabra also revealed that Vishal and Rekha Bhardwaj and Alok Nath, too, were at the same college.

Kya snob? I went to common people's college. Although Vishal and Rekha Bhardawaj were there later. Alok Nath was in my year.

You went to college with Alok Nath?!!! How has he been playing daddy-of-the-year since 90s?

Chhabra then dropped the stunner that Alok Nath also hailed from the same school as him but was expelled for allegedly taking drugs. 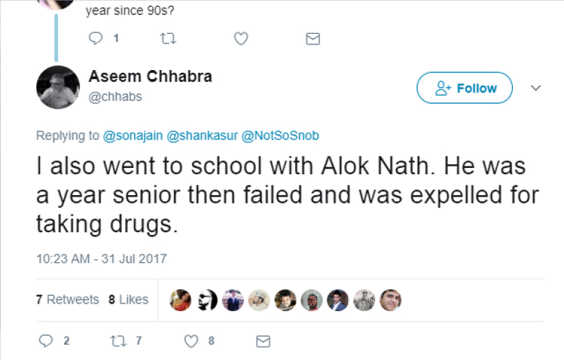 However, Chhabra did not tag Alok Nath in his tweet. Nevertheless, we wonder how the seasoned actor would react when he comes across this statement.