The actress wrote a letter to her school and college requesting them to focus on instituting self-defense classes for girls, while also stressing the importance of tackling the issue of depression among students.

Taapsee Pannu is turning into quite the female icon since her performance in Naam Shabana. The actress has now written a letter to her school and college requesting them to focus on self-defense classes for girls.

An alumni of Mata Jai Kaur Public School in Ashok Vihar, Delhi and the Guru Tegh Bahadur Institute of Technology, the actress wrote a sensitive letter to the institutions requesting them to introduce self-defense classes for girls.

In the letter, the actress writes, "Our educational system should indulge students in compulsory practice of selfd-efense. Behind books and projects, it is an individual who is prepping for what's to come in life." 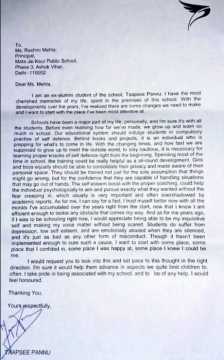 The actress maintained that it is necessary for both genders, girls and boys, to learn self-defense. She wrote, "Girls and boys equally should be able to consolidate their privacy and be made aware of their personal space. They should be trained not just for the sole assumption that things might go wrong, but for the confidence that they are capable of handling situations that may go out of hand."

In addition to the self-defense, the actress also stressed on the need to tackle the issue of depression among school students. She suggested that such measures might also help improve the self-esteem among students and enable them to successfully overcome depression.

The actress offered her help saying: "I take pride in being associated with my school, and to be of any help, I would feel honoured."

Reports suggest that the principal of the school has already taken note of the matter and has started working towards it.