The multi-talented filmmaker was a close friend of Raj’s father, Prithviraj Kapoor, from their days together in Kolkata working for New Theatres.

Kidar Sharma saw filmmaker Debaki Bose’s Puran Bhagat starring KL Saigal and decided then and there that he wanted to pursue a career in films. Against the objections of his family, he boarded a train to Kolkata to find a job in the film industry there.

He got an opportunity to work with his idols, befriending KL Saigal and getting a job as a still photographer on Bose’s next production. In fact, on the sets of the internationally acclaimed Seeta (1934), Sharma, along with director Debaki Bose, leads Prithviraj Kapoor and Durga Khote were nicknamed ‘Gang’ and ‘Four Musketeers’ by the crew.

Through the encouragement of various key individuals at New Theatres, Sharma rose up the ranks, from photographer to painter to writing lyrics and dialogues for PC Barua’s Devdas (1935), starring KL Saigal.

Meanwhile, Raj Kapoor appeared in a small scene in his father’s film Gauri (1943) that Kidar Sharma directed. Back in Kolkata, Debaki Bose had also cast Raj as a young boy in his 1935 film Inquilab (After The Earthquake). Raj began an apprenticeship of sorts with Kidar Sharma as assistant on a few of his films. Eventually, Kapoor graduated from clapper boy to lead actor under his tutelage, but not before learning a strict lesson about his place in front of the cast and crew.

In the book, Raj Kapoor Speaks, Kapoor's daughter Ritu Nanda recounted the incident told to her by her father. “One of my tasks was to give the clap before every shot. I had a good vibe with camera man, and he had agreed to take a close-up of me before every shot and give me the photographs. I used to comb my hair immaculately and then bend my face a little forward over the clapper-board to get a nice close-up. No one had noticed this till, one day, I clapped hard and moved away as usual, but this time the actor’s beard got caught between the clapper-board and the stick. The entire unit burst out laughing and a furious Sharmaji gave me a stinging slap on the face. I was stunned... but I never said a word; I knew the mistake was mine. I walked quietly off the set. As a result of this episode, I got my first lead role. Sharma-ji later said, ‘I was struck by the depth and pain in those intense eyes.’”

Naturally, Kidar Sharma shared his own account of the incident in his autobiography, The One and Lonely Kidar Sharma. He recalled that the cast and crew had travelled to an outdoor shoot to Ghodbundar for a single take at sunset. It was to be a ‘symbolic shot depicting the king’s downfall with the sun setting in the background.’

After the actor’s beard was caught in the clapper-board, Sharma grew angry. He wrote, “We had waited hour and had travelled more than 40 miles to take this shot. I could not control my temper, and in total rage and fury I called Raj. He approached me with a faint smile and when he came to me, I slapped his face hard in front of the entire unit, and a large group of spectators.”

Sharma had slapped the young man so hard that it left an impression on his face. Yet, Kapoor did not complain. The crew packed up and left the location.

Afterwards, at night,Sharma regretted his actions. “I could not sleep. I was ashamed of what I had done, but now I understand the reason why Raj combed his hair and always smiled at the camera. It was because the boy was most keen to face the camera, and not stand behind it.” 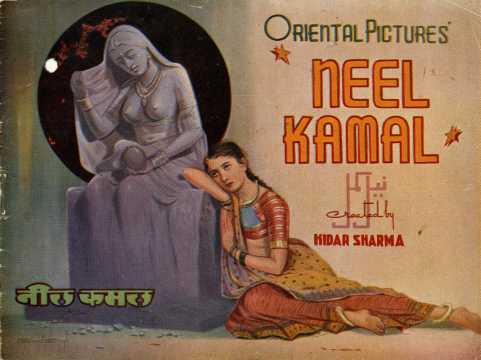 The next day, the shot was finally completed and Sharma called Raj to his office, not to reprimand him, but to offer him a contract of Rs25000 for his next production. The film was Neel Kamal (1947) and Kapoor’s co-star was Madhubala, a child actress transitioning to lead actress.

Many years later, the filmmaker was to be honoured by the Maharashtra government with the Raj Kapoor award, but sadly, he died a day before he was supposed to receive the prize on 29 April 1999. The student had long passed a decade ago, and the teacher too could not collect the award.