A handful of films revolving around astronauts are being planned for the coming year, and it seems like a welcome trend.

2018 might suddenly see a surge of films in which actors like Sushant Singh Rajput and Priyanka Chopra take those tentative steps into space.

Rajput has been cast as an astronaut in Sanjay Puran Singh Chauhan’s Chanda Mama Door Ke (2018) while R Madhavan and Nawazuddin Siddiqui are also part of the project in key roles.

Chanda Mama Door Ke’s director had previously helmed Lahore (2010), revolving around the sport of kickboxing. That film won him the National award for Best First Film of a Director. Not much has been revealed about Chanda Mama Door Ke, apart from the fact that Rajput will be an astronaut and Madhavan will co-star as an air force pilot.

Recently, with Chopra’s return to India, there has been a strong buzz that the Quantico actress has given her nod to the Kalpana Chawla biopic, which has been in the planning stage for quite long. Chawla, the first Indian woman to embark on a mission in space, was part of the seven-member crew of the space shuttle Columbia, which disintegrated on its way back to earth, killing everyone.

First-time filmmaker Priya Mishra has been working on the project for the past seven years and it now looks like the film is picking up speed. Chawla was only the second Indian to make it into space; astronaut Rakesh Sharma was the first. Coincidentally, a biopic on him is also being planned.

Aamir Khan was rumoured to have signed the Rakesh Sharma biopic project, tentatively titled Saare Jahan Se Achcha, the famous words uttered by Sharma when he viewed India from space. The superstar is known for taking on one film at a time and he will be tied up with Yash Raj Films’ Thugs Of Hindostan for the foreseeable future.

Former UTV head Siddharth Roy Kapur is tied to produce the feature under his own banner. However, the casting of Rakesh Sharma, the first Indian to go into space in 1984 as part of a joint Indo-Soviet programme, will be crucial. Khan, who is known to get into the skin of his characters, would have been the natural choice for the lead role. 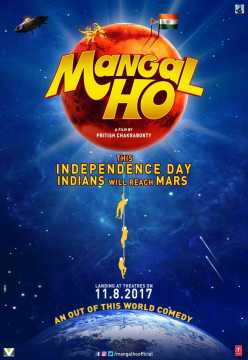 Besides these three space-travel films, actor-director Pritish Chakraborty’s Mangal Ho (2017) looks to find the comedic side of the cosmic journey with an ‘out-of-the-world’ film exploring the colonization of Mars. Actors Sanjay Mishra and Annu Kapoor are part of the film which is set 25 years in the future. Mangal Ho is due to be released this August.