The Children Of Heaven filmmaker is in Mumbai shooting his next, Beyond The Clouds.

Legendary Iranian filmmaker Majid Majidi is in Mumbai, currently shooting his next flick, Beyond The Clouds. He was spotted recently at the iconic Chhatrapati Shivaji Terminus (popularly known as VT) station shooting a sequence for the film.

In both pictures, he is seen standing on one of the railway platforms. One shows him imagining a sequence near a train. In the second one, he is inspecting a scenario while standing next to shooting equipment.

Beyond The Clouds has been in the news for quite some time in India. This is because Majidi enjoys a big fan following in the country. His film Children Of Heaven (1997), which is considered his best film, was highly appreciated in India. It was officially remade in Hindi in 2010 by Priyadarshan as Bumm Bumm Bole.

Produced by Zee Studios and Eyecandy Films, Beyond The Clouds is based on human emotions and it features the story of a brother and sister. The film stars Ishaan Khattar and Malavika Mohanan. Ishaan is the younger brother of Shahid Kapoor. Malavika is an actress from Malayalam and Kannada cinema.

There were reports about Hindi film superstar Deepika Padukone being considered for the role of the female lead. 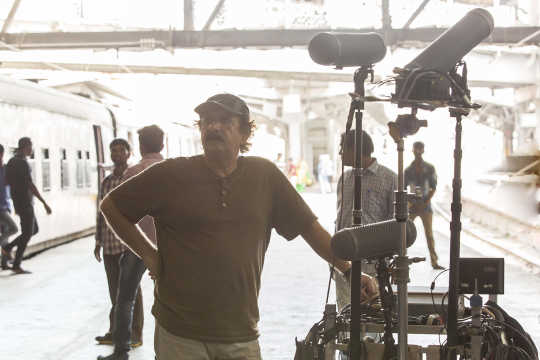