World Book Day: 20 books that made it to the big screen


'It wasn't as good as the film,' is a statement that makes some of us roll their eyes.There are some films that have touched the high standards of their book versions. On World Book Day, we take a look at some stories that travelled from the desk to the film reel.

Devdas (adapted from the novel by Sarat Chandra Chattopadhyay) 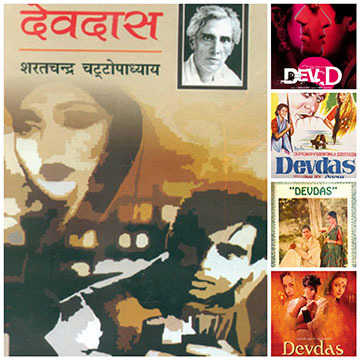 This 1917 romance by Bengali writer Sarat Chandra Chattopadhyay is one of the most frequently adapted books in Indian cinema. A tragedy of epic scales, the book made for a mesmerising film script. Over the century, KL Saigal, Dilip Kumar and Shah Rukh Khan have taken on the mantle of the tragic hero with success. Even the enfant terrible of modern Indian cinema, Anurag Kashyap could not stay away from this epic saga.

Parineeta (adapted from the novel by Sarat Chandra Chattopadhyay) 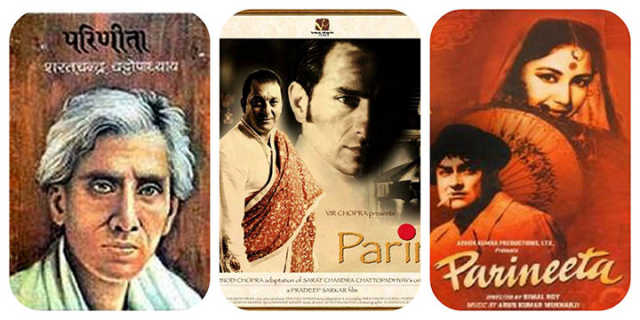 Another Bengali tale of unrequited love, jealousy, and tragic misunderstandings, Parineeta has been frequently filmed on the large screen. The 1953 adaptation by Bimal Roy saw powerhouse performances by Meena Kumari and Ashok Kumar. In 2005, the novel's latest adaptation brought another fiery female star to Indian cinema, Vidya Balan. 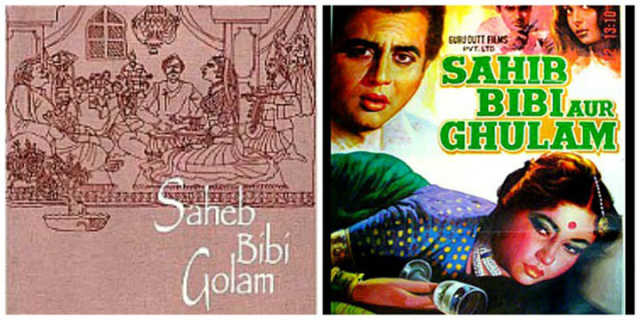 When the handsome face of Rehman snarled at Meena Kumari and uttered 'Gehne tudvao, gehne banvaao, aur koriyan khelo... so aaram se.', it was India's 'I don't give a damn' moment. The ethereal tale of love and betrayal was handled with a delicacy and pathos that defined the duo of Guru Dutt and Abrar Alvi. Meena Kumari's distinguished performance as the the tragic Choti bahu is still considered the epitome of a tragic heroine. 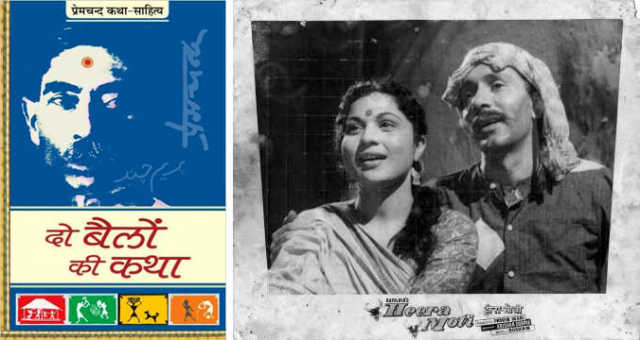 Few writers have been as popular, yet as ignored, as Premchand in the world of films. This 1959 classic starring Balraj Sahni and Nirupa Roy was based on a beautiful short story by Premchand. The story talks about the evils of land tax and the struggles of the poor farmer. A situation many farmers are familiar with to this day.

Kabuliwala 1961 (based on the short story 'Kabuliwala' by Tagore)

The film was directed by Hemen Gupta, once secretary to Netaji Subhash Chandra Bose. Kabuliwala was released in 1961, the birth centennary of its author, Rabindranath Tagore. The portrayal of the  jovial, kind Pathan by Balraj Sahni was a hallmark of India's neorealist movement in cinema. Salil Chowdhury added to the emotion with his soulful composition to Manna Dey's voice in 'Aye Mere Pyaare Watan'.

Sujata (based on the short story 'Sujata' by Subodh Ghosh) 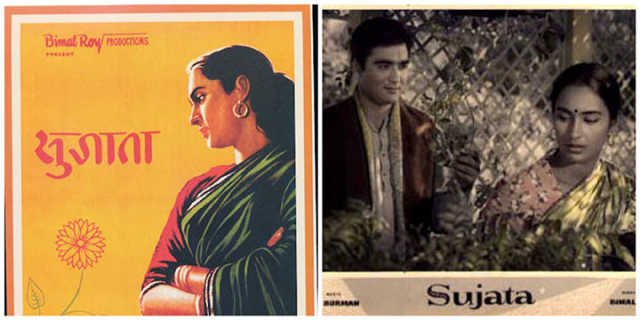 In 1960, the sensitive Bimal Roy brought this wonderful tale of love between an untouchable woman and a Brahmin boy to life in Sujata. Blessed with a fabulous cast of Nutan, Sunil Dutt and Tarun Bose, Bimal Roy touched the hearts of millions across the world. Ghosh would go on to win the Filmfare Award for the best story. 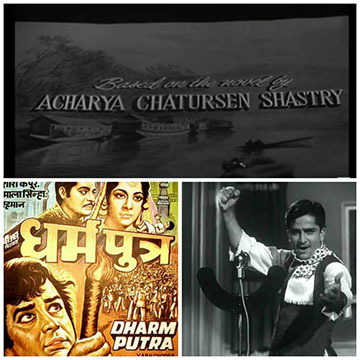 Yash Chopra, of the chiffon sarees and duet songs on Swiss mountains, was a different filmmaker when he began his career. One of his early works is this gritty, realistic tale Dharmputra. Hindi writer Acharya Chatursen wrote the story of a Muslim boy adopted by a Hindu family who grows up to be a religious fundamentalist. The film saw Shashi Kapoor make a mark in his first adult role, and an unknown Deven Verma in a small role. It never took off at the box office. Who knows what kinds of films Yash Chopra might have made if it had?

Guide (based on the novel by RK Narayan) 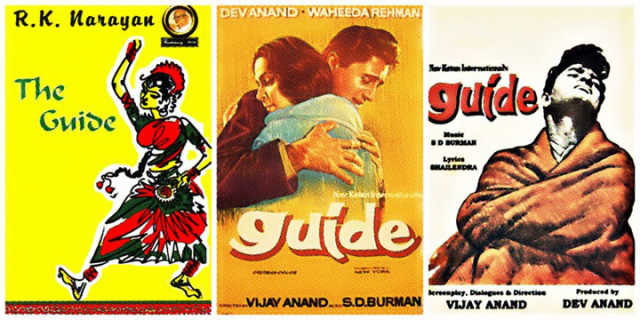 Dev Anand considered it his finest work, while RK Narayan felt it was absurd. It remains the most enchanting Bollywood film to be made from a book. The movie, starring Dev Anand as the 'guide' and Waheeda Rehman as the danseuse Rosie, was a blockbuster hit. Though it did not please its author, the movie did capture the ethos of Narayan's book.

Shatranj Ke Khiladi (based on the short story by Munshi Premchand) 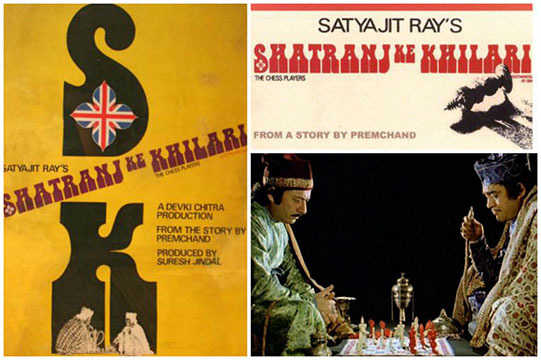 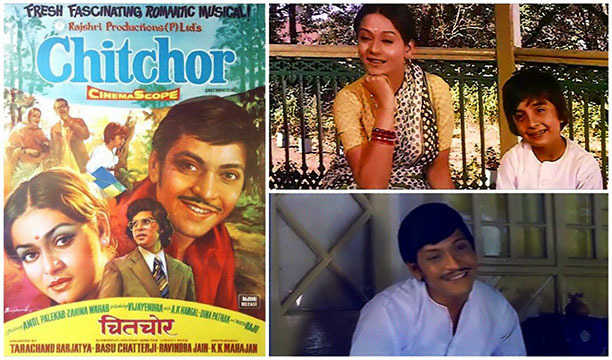 Even at the height of the 'Angry Young Man' phase, there were some filmmakers in Bollywood whose films did not revolve around superhuman heroes or Amitabh Bachchan. Basu Chatterjee's lighthearted adaptation of Subodh Ghosh's lovely story 'Chittachakor' proved to be a cult hit. Starring the 'middle class hero' Amol Palekar, Zarina Wahab, and Master Raju in a wonderful role, the movie provided a delightful diversion from the anger exploding on the silver screen in the 1970s.

Junoon (based on Ruskin Bond's A Flight of Pigeons) 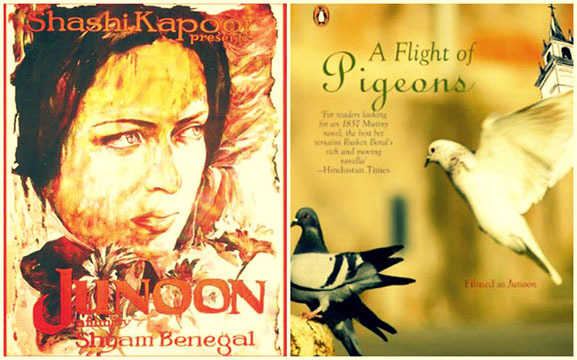 Shyam Bengal's tale of fiery love caught in the midst of turmoil remains immensely watchable even decades later. Adapted from Ruskin Bond's novella 'A Flight of Pigeons', it has some stunning performances by Shashi Kapoor, Naseeruddin Shah, Jennifer Kendall, and Shabana Azmi. The film won the National Awards for Best Feature Film, Cinematography and Audiography.

Kalyug (based on the Mahabharata) 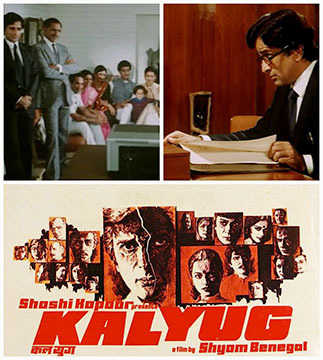 Shyam Benegal's Kalyug belongs to the time of Shashi Kapoor's rise as an enterprising producer of art films. The movie is an adaptation of the Mahabharata set in modern times. Raj Babbar takes on the role of Yudhishtir, while Victor Bannerjee took on the heavy duty role of Duryodhan. But the one actor who takes the cake is Shashi Kapoor, who provides gravitas and nobility with his performance as Karn.

Mandi (based on Ghulam Abbas's Anandi) 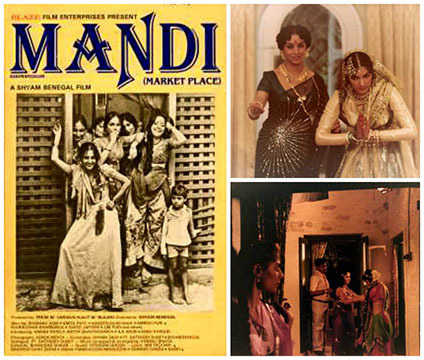 One of the best films in Shyam Benegal's canon, Mandi explored broad social themes about the exploitation of women. The film was based on Ghulam Abbas's short story 'Anandi'. Powered by the performances of Shabana Azmi and a 22-year-old Smita Patil, the film went on to become a shining example of the kind of parallel cinema India was beginning to produce.

Mirch Masala (based on Chunilal Madia's story of the same name) 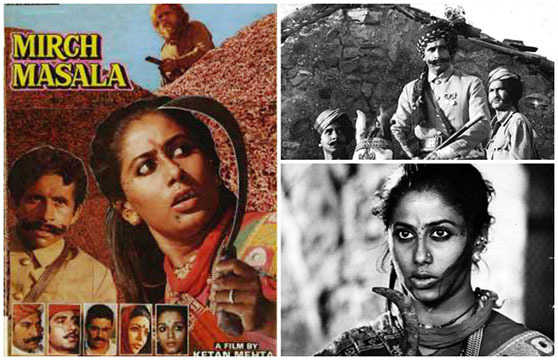 Considered one of Smita Patil's best films, Mirch Masala was a rousing tale of the fight for self-respect and liberation among women in a village in Rajasthan. Ketan Mehta built a script out of famous Gujarati author Chunnilal Madia's short story. Although surrounded by some seriously talented actors, Patil stood out as the courageous, independent heroine. Forbes listed it as one of the '25 Greatest Acting Performances in Indian Cinema.' 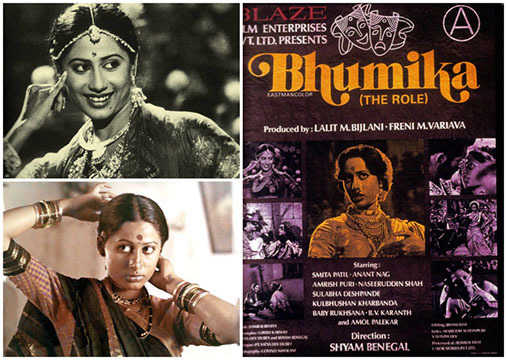 Based on Marathi actress Hansa Wadkar's biography, Sangtye Aika, Bhumika is considered one of Smita Patil's finest performances. Hansa Wadkar began her journey as an actress at a time when women were still struggling to step out of their homes. Patil's personification of those struggles and the fight to define her identity stand out as the most important moments of the movie. 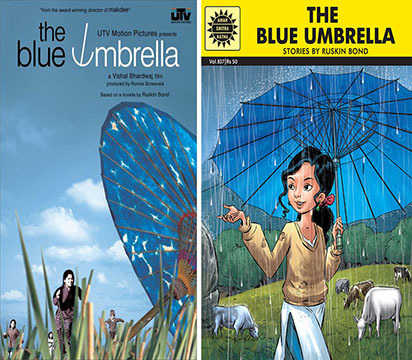 Considering Gulzar's love for adapting stories into films, it was natural that his protege acquired some of that love too. In 2005, Vishal Bhardwaj adapted Ruskin Bond's novella, The Blue Umbrella, into a film. Filmed in the scenic locales of Darjeeling, the movie was a success. Unlike many filmmakers, Vishal Bhardwaj shares a close friendship with the author. Bhardwaj and Ruskin Bond are also neighbours in Mussoorie. 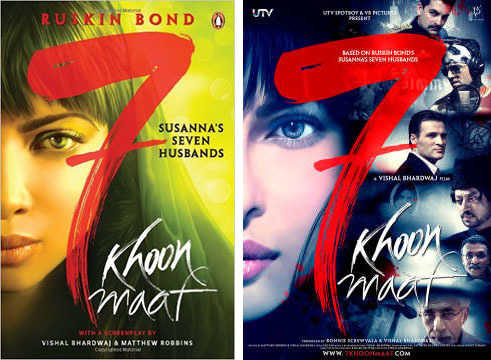 Following the critical success of The Blue Umbrella, Vishal Bhardwaj saw the possibility of adapting another short story Susanna's 7 Husbands into a film. The film proved to be a masterstroke, and earned Priyanka Chopra the Filmfare Critics Award for Best Actress at the 57th Filmfare Awards. It also earned Ruskin Bond his first role in a film.

Bajirao Mastani (based on the novel Rau) 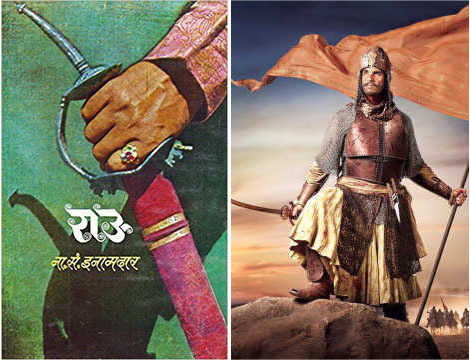 Sanjay Leela Bhansali's grand epic on Peshwa Bajirao I was based on Nagnath Inamdar's Marathi novel, Rao. The film saw Ranveer Singh step into the shoes of the great Peshwa, while Deepika Padukone played the ethereal Mastani. Priyanka Chopra put in a stellar performance as the devout Kashibai, wife of the great Peshwa. The film made a clean sweep at the 2016 Filmfare awards winning awards for the Best Film, Best Director, Best Actor in a Leading Role and Best Supporting Actress.

Based on Charles Dickens's epic Great Expectations, the film saw Aditya Roy Kapoor and Katrina Kaif take on the leading roles. The well-known surprise element of the film was Tabu, who plays the seductive and dangerous Miss Havisham from the book. Despite its gorgeous cinematography and talented bunch of actors, the film failed to match up to the exquisite storytelling of Dickens. 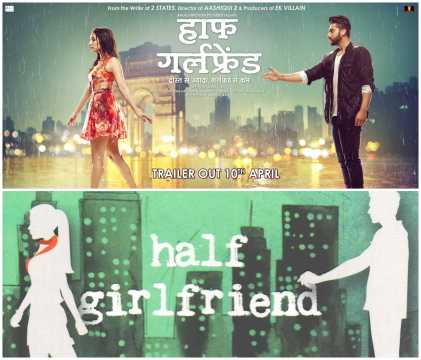 The latest to join the fray is Mohit Suri's Half Girlfriend. Based on writer Chetan Bhagat's novel of the same name, the film stars Arjun Kapoor and Shraddha Kapoor in the lead roles. Bhagat is no stranger to his books being turned into films, having been a part of 3 Idiots (based on 5 Point Someone), Hello (based on One Night At the Call Center), 2 States (novel of the same name), and Kai Po Che! (based on 3 Mistakes Of My Life). In fact, Bhagat is one of the most adapted novelists in Hindi cinema. To put that in context, he ranks in a list that includes names like Rabindranath Tagore, Premchand, Sarat Chandra Chattopadhyay and Ruskin Bond. Beat that!