Priyanka Chopra 'happy to be back in Mumbai's heat'


The actress landed at Mumbai airport yesterday after a year in the United States of America.

After a year long tour of the United States of America, Priyanka Chopra is back in India. The actress touched down at Mumbai airport on Friday night, only to be mobbed by a crowd of fans and photographers at the exit gate. 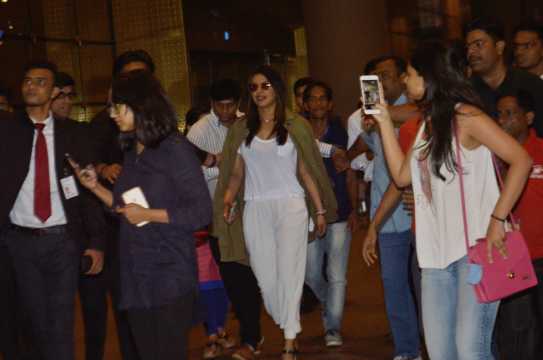 Chopra, who has been making a mark as the most visible face of Indian cinema overseas, will be in the country for a 10-day long vacation. The actress was recently on the jury of the Tribeca Film Festival, having completed the shooting schedule for the second season of her television series, Quantico.

The actress had recently tweeted of having 'conflicted emotions' at packing up her house in New York after the shooting for Quantico concluded.

Packing up the house is such a conflicted emotion!so many things pop out that u didn't remember..Last official week in NYC until next time..

However, arrival in Mumbai has changed it all. The actress seemed to enjoy the attention. Speaking to the press gathered, she said, "I am very excited to have returned home. I have been out of town for a very long time. I am just very happy to be back. Mumbai's heat, the people, the smells, I am just happy to be back."

Wherever in the world I go.There is nothing like coming home.thank you to everyone who gave me such a warm welcome as I landed in mumbai â¤ï¸

Trying to get to my car at the airport.. but so much love and affection. Walking into my house was such a feeling of joy.. ð happy to be home! #happygirlhere

The actress might be back, but she is not done with Hollywood yet. Chopra will be flying back to the United States in May for the release of her film, Baywatch. The actress stars alongside Dwayne Johnson, Zac Efron, Alexandria Daddario and others in the movie version of the cult television series.

While she had promised to try and get Johnson to fly to India for the promotions, in a recent interview, Chopra admitted it was unlikely. She said, "It seems very difficult. I don’t think we will be doing much. We will be only doing one or two countries when it comes to travelling for Baywatch, but I don’t know yet what the marketing plan by Paramount Pictures is. But while I am in town, I will definitely do as much as I can. I don’t know about the rest of the team."

For now though, the actress can kick back and relax.