The actress attended a special lunch as part of the jury for Tribeca Film Festival 2017 and rocked the red carpet at Harper's Bazaar 150th anniversary celebrations.

Priyanka Chopra may have finished shooting for Quantico season 2, but that doesn't mean that the actress is sitting back and relaxing. The actress has attended several events in the last couple of days, before boarding a flight to India on 21 April. 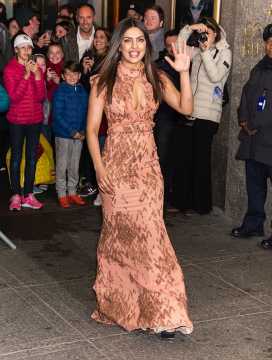 And as always she made it to many of the best dressed lists.

Easily one of my favorite dresses of the week!! @PriyankaChopra at Harper Bazaar's 150th celebration in NYC. https://t.co/2KeODvi1Te pic.twitter.com/c8nB5386TX

The actress also met some big designers, magazine editors and philanthropists at a power lunch at a popular restaurant in New York City and the paparazzi wasn't far behind.

"The joint was jumping at Michael’s today, where a scrum of paparazzi had their noses pressed against the glass in hopes of getting a better look at Quantico star Priyanka Chopra. Unfortunately for the shooters, the actress sat with her back to the window at Table One, alongside Elle magazine EIC Robbie Myers, who was hosting a table full of important-looking folks. Who says the power lunch is dead?" wrote Adweek.

But once she walked out of the lunch meeting she was asked to comment about making it to the People's Most Beautiful 2017 list, with a special mention for her gorgeous hair.

Yesterday the actress met Hollywood icons like Robert DeNiro and Whoopi Goldberg at a special lunch for jury members of the upcoming 16th edition of the Tribeca Film Festival.

Chopra, who became a popular name in Hollywood through her lead role in TV series Quantico, judged the 2017 Documentary and Student Visionary Competitions alongside Olivia Thirlby, Ryan Eggold, Brendan Fraser and Ileen Gallagher.

Chopra said she was happy that she got to spend some time with the greats and shared a photograph to Twitter.

She posted: "An afternoon with the greats. Congrats Whoopi Goldberg, Jane Tribeca and Robert DeNiro on 16 years! Thanks for including me! Tribeca 2017 Jury Duty."

The winners of each category will be announced at the Tribeca Film Festival Awards ceremony on 27 April at BMCC Tribeca Performing Arts Center. The festival, from 19-30 April, will be hosted by Michael Rapaport.

Meanwhile Chopra is expected to arrive in India on 22 April. During her trip, the actress is slated to host a party for her friends, decide on her next Hindi film and complete commitments for her brand endorsements, before flying off to South Africa for a UNICEF charity gala (Chopra is the global brand ambassador for UNICEF) on 6 May. She will then head back to the US for Baywatch promotions and attend the New York premiere of the film on 22 May.