For the actress-dancer’s 103rd birth anniversary today (20 April), we present some amazing information about the Bengali star. 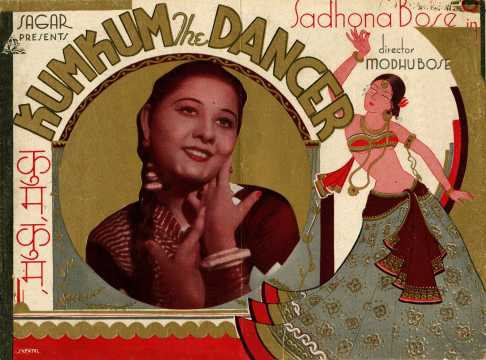 1. The exemplary danseuse, Sadhona Bose (nee Sadhona Sen), was introduced in Hindi cinema with Kumkum The Dancer (1940) by her filmmaker husband, Modhu Bose. Newspapers of the time reported that the film turned her into an overnight star. The film review in Filmindia magazine stated, “The burden of the entire tale is Sadhona and she has done marvelously well. Beautiful dancing, punctuated by suitable symbolisms, superb acting, sweet and sympathetic diction, poise and dignity born of traditions and an undefinable charm all at once proclaim a new star to our screen world.”

2. With the success of Kumkum The Dancer (1940), Modhu wanted to launch Sadhona on a grander scale. Produced by Wadia Movietone, the trilingual Raj Nartaki or The Court Dancer (1941) was one of the earliest Indian talkies to be released in the USA with English dialogues in 1944. Co-starring Prithviraj Kapoor, Jal Khambhata and Protima Das Gupta, Raj Nartaki was the doomed love story between the prince Chandrakirti (Kapoor) and the beautiful court dancer Indrani (Bose). Unfortunately, the English version received a poor reception in Hollywood.

3. Before she became a screen star, Sadhona Bose was the famed and accomplished ballet and stage dancer of Kolkata. When she performed the stage version of Alibaba in 1929, Sadhona met the Russian prima ballerina Anna Pavlova and worked with her in passing on certain dance elements. Later, she especially took on social issues that were troubling the nation and incorporated it into her dances. She created a ballet called ‘Bhook (Hunger)’ during the Bengal famine of 1943.

4. Sadhona's beauty and screen presence inspired many to name their daughters after her. The actress Sadhana, who made her Hindi film debut with Love in Simla (1960), was named after Sadhona as she was her father’s favourite actress.

5. Bizarrely, an American author Walter Semkiw, also a reincarnation specialist and medical practitioner, claimed that actor Shah Rukh Khan was the reincarnation of Sadhona. The allegation doesn’t match up as Sadhona died on 3 October 1973, while the Chennai Express actor was born on 2 November 1965, eight years before the dancer-actress died.