There is appalling ignorance about Indian films: Critic Meenakshi Shedde


Shedde, National award-winning film critic and South Asia consultant for the Berlin film festival, is set to conduct a workshop in Mumbai to discover 'world cinema' from India.

In an age of superstars and box-office collection claims, true cinema analysis and appreciation has taken a back seat. But cinephiles in Mumbai can rejoice. For enthusiasts, critics, and students looking to understand the language of cinema, the 101 Film Appreciation Workshop by Avid Learning might prove to be the change.

Speaking to Cinestaan.com, Shedde said, "An important part of the workshop is introduction to world cinema in India. Somehow in our head, we never think of Indian cinema as world cinema. As if India is not part of the world! We are focusing, specifically, on regional language films in Marathi, Bengali, Tamil, Malayalam and also Hindi films which are not masala films with big stars. These films have travelled to international film festivals, won acclaim there, so the world thinks of them as world cinema."

The workshop includes a chance to appreciate independent and mainstream films of striking and innovative filmmakers such as Chaitanya Tamhane (Marathi), Suman Mukhopadhyay (Bengali), Rajeev Ravi (Malayalam) and Karthik Subbaraj (Tamil), and watch trailers/clips of their films. This power-packed, day-long workshop will also help the guests learn about conceptual frameworks of film appreciation, screening and analysis of a short film, followed by screening of a curated reel of film clips of trailblazing regional films that have won praise and prizes at festivals worldwide 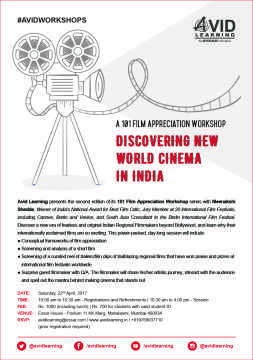 The workshop will allow students to watch, discuss, and analyse films from talented and critically acclaimed filmmakers from all over the country. The second edition of the workshop series from Avid learning, the daylong event is open for amateurs, film critics, and students.

Explaining the reason for the initiative, Shedde said, "We are bringing up a generation of film lovers who know everything about Hollywood. They know all of Scorcese, Coppola, and can name five Iranian directors. But very few of them know Indian directors. There is an incredible poverty of [knowledge of] Indian cinema."

Shedde said guests will have the opportunity to speak with acclaimed filmmakers, interact with them and find answers to questions about cinema. The event is scheduled to be held on 22 April.