Mark Bennington: An actor’s life is full of waiting


Living the Dream: The Life of the Bollywood Actor, a coffee-table book by actor-photographer Mark Bennington, features a refreshing look at some of the biggest stars of Hindi cinema. Bennington speaks about the people who helped make his project a reality and what he discovered about the inner lives of the stars.

In 2010, American actor-photographer Mark Bennington came to India with a visual project in mind. He wanted to shoot both the ordinary and the extraordinary lives of those involved in the Hindi film industry. Not knowing anyone in Mumbai, Bennington persevered and slowly but surely built up a network of contacts who got him in touch with the who’s who of the industry.

But Bennington was also interested in those still struggling to get discovered. The book also focuses on the character actors and little-known personalities working in films and television. The results are in the beautifully captured candid photographs as the artistes go about their daily lives.

Bennington spoke to Cinestaan.com about his book, Living the Dream: The Life of the Bollywood Actor, its long journey to publication, and his discoveries about those who make up the Hindi film industry. Edited excerpts below: 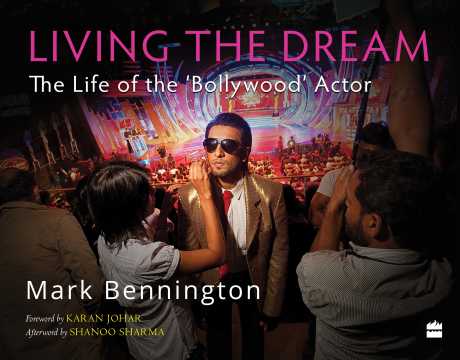 It has taken you seven years to get Living the Dream published. Did you ever despair that it might not happen?

The crazy thing about the book is the whole thing was finished in 2011. I got 95% of all the images within about six months. Then it just took time because it was at another publishing house, they were really interested, and then six months later, they said they were going to pass. I’m a pretty busy commercial photographer so I had to be back [in the US] for work. I got married and life happened. There was a whole year I had completely forgotten about [the book] and nothing was happening.

After my wedding, I met with HarperCollins and it took them two years to publish the thing. But these things happen. It all seems for the best because I don’t think the book could have come at a better time. It actually makes the photographs more interesting, because now that there is a little bit of distance, it’s like drinking a wine from 2011. The soil was different that year, the weather was different that year. Visually, as we look at the book, wow, Ranveer’s on the cover! That was after his first film. Now look at him! How fitting that he is on the cover. And then looking at Kareena, she’s not at the same place and Ranbir’s not at the same place.

Of course, some people are gone, Dev Anand and Om Puri. I tell my wife this all the time, ‘Everything happens exactly the way it’s supposed to and when it’s supposed to’, more importantly.

Who helped you along the way to make it a reality?

The two most important people are Guneet Monga and Shanoo Sharma, because without those two amazing women the book wouldn’t have happened. I met Guneet when I first came [to Mumbai] and didn’t know anyone. She said, ‘I don’t know any stars, but I know a lot of actors.’ She really got the project started. After two-three months, I got connected to Shanoo and that was the gamechanger. Because not only did she know a lot of people, but she also invested a lot of herself, her spirit and her time into it. It’s one thing to say 'yes, I’ll put you in touch with a couple of people', but we were together every day for four months or five, calling, emailing, texting [everyone for the book]. It was such an intense period of time in my life that I just cherish. So I love both these women, more than they'll ever know.

They were the reason why the book happened?

Or I should say, without them the book wouldn’t have happened. I would have come here and made a book and interviewed actors and taken photographs, but the book as we know it, it would not be as it is without those two amazing women.

And while you were taking your photographs and talking to all these people, what did you discover about the life of a Hindi film actor?

I learnt that character actors are the busiest actors in the entire business because they are always working. The stars only do a few films a year, but the character actors do [around] 20 films a year. Getting in touch with Vijay Raaz was harder than getting in touch with Salman [Khan]. That’s the truth. Also, I think India as a culture is just so disciplined compared to the States, that really comes through.

There is so much talk about nepotism and all this stuff, but my view of it is nepotism is nepotism. It’s in every single business throughout the history of the world. It’s not going to change. The people that I’ve come in contact with personally and spent quite a bit of time with, they are so hard-working, taking nothing for granted. It’s not like they waltz into the room on a silver spoon and just get fed caviar and a pay cheque; these people are working their arses off. So maybe they have more contact than somebody who’s just moved here with no contacts, obviously that’s true, but it doesn’t mean they don’t work hard. I think they are incredibly grateful for what they have and know what they have, even if they don’t say it every five minutes.

Karan Johar, who has written your foreword, made an interesting observation about your work. He talks about the obsession with vanity that your photographs have captured. Do you feel that is true as well?

The last look in India, it’s not like this anywhere else I’ve experienced, also being an actor myself. The last look is the actor himself or herself looking into the mirror to check their own makeup, which is very strange. I don’t know why they would have to do it every single take. I don’t think that there’s any more vanity in India or in Bollywood than there is in Hollywood. Vanity is vanity, again, this is just part of human nature. Everyone is vain, with the exception of 1 or 2% of the population. Everyone cares about the way they look. It’s in our DNA.

You have met a lot of personalities in the course of the book — famous and non-famous. Who were the most memorable?

(Laughs) It’s like choosing your favourite rock from Mount Everest. Hanging out with Salman Khan for two days was a trip. He was so cool and chilled out and it was totally normal. He was just so warm and wonderful and yet I turn around, what seems like a totally normal conversation, I turn around and there are thousands of fans staring at us. It was trippy.

[On the other hand] is Gabbar Singh, the street performer. I love that also he’s not a one-of-a-kind. If the entire book represents branches of that tree, [Singh] represents that particular branch. And that’s a very real sect of the community, these youngsters who come to Bombay with stars in their eyes, think they can literally come to the city, knock on Shah Rukh Khan’s or Salman’s door and say ‘Hey man, I’m here! Put me in the film. I’m ready.’ That particular kind of naivete, it’s such an absolute innocence of not knowing the scene.

That was also an instigator for the book in the sense of wanting to create this work of art that would last. That would be an education tool for people moving to the city. So they could actually see with their own eyes, read the words and really get a sense of the whole spectrum.

Which are some of your favourite photographs from the book?

Technically, as a photographer, the Pooja Verma image is probably the strongest, the television actress who talks about the casting couch. I love the Kareena Kapoor Khan image and also that Chitrangada Singh photo. That’s a great shot just because there’s all of this stuff happening, she, the poster and it’s the moment of getting the interview with all the reporters and journalists and then right dead-centre in the shot is the most bored guy in the entire city. So it really gets the whole gamut of everything that happened. It also captures the lingering theme throughout the book, of waiting. Everyone is waiting. [In] the picture of Ranbir Kapoor, he’s waiting, the picture of Sonam Kapoor, she’s waiting for somebody to change the lights. An actor’s life is full of waiting, even the strugglers, whoever is waiting to get discovered.

What are you working on after this?

I’m 85% finished with a book called ‘Mi Mumbai [I am Mumbai]’. It is an 180° turn from Living the Dream, stylistically. It’s black and white portraits against a white background in natural light of my circle of friends and strangers, this combination of familiar and unfamiliar. The point is to create a portrait of Mumbai. My wife and I are shifting [to India]; she is from Pune. I’ve started working with this agency called DEU Creatives and we are very keen to sort of get my perspective into advertising and the corporate sector. So we’re going to be spending a lot more time here.