Is this Kangana Ranaut's look as Jhansi Ki Rani?


A sketch of Ranaut went viral online, leading to speculation that it could be her look from Manikarnika — The Queen of Jhansi.

She's lately been in the news for her controversial comments, but Kangana Ranaut would welcome the focus back on her career. Ranaut is set to star in Manikarnika — The Queen of Jhansi, based on the life of warrior queen Rani Laxmibai, who fought against the British Empire. A sketch of Ranaut, perhaps in her Jhansi Ki Rani look, has gone viral online, leading to speculation that it could be her look from the historical film.

There is no confirmation from either the actress or the filmmakers, but the sketch is making news online.

Ranaut looks like she’s game to play the warrior Maratha Queen. The glamour, especially the hairdo, cannot be missed. 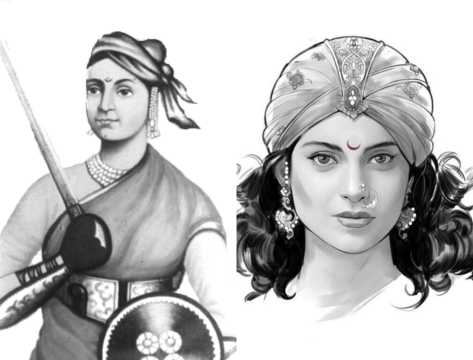 Manikarnika — The Queen of Jhansi is directed by Radha Krishna Jagarlamudi, better known as Krish. Baahubali writer KV Vijendra Prasad, father of SS Rajamouli is writing the script for Manikarnika. The film will be a tri-lingual film with the shoot set to begin in May. Ketan Mehta was directing the film earlier, but opted out due to rumoured differences with Ranaut.

Born as Manikarnika, the warrior queen was renamed Rani Laxmibai after her marriage to Raja Gangadhar Rao. Laxmibai was one of the leading figures of the Indian rebellion of 1857 and became for Indian nationalists' a symbol of resistance to the British Raj.

Ranaut was last seen in Vishal Bhardwaj's Rangoon that tanked at the box office. Apart from Manikarnika — The Queen of Jhansi, Ranaut will also be seen in Hansal Mehta's Simran.